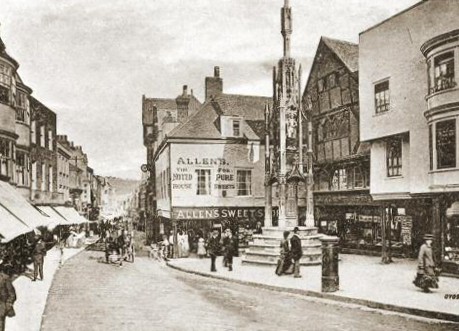 The area around Winchester has been inhabited since prehistoric times, and after the Roman conquest of Britain the settlement served as the capital of the Belgae and was known as Venta Belgarum, among the largest towns in Roman Britain.

The city later became known as Wintan-ceastre (‘Fort Venta’). In 648, King Cenwalh of Wessex erected the Church of SS Peter and Paul, later known as the Old Minster. This became a cathedral in the 660s; the present form of the city dates from reconstruction in the late 9th century, when King Alfred the Great destroyed the Roman street plan.

In the 10th century, bishop Æthelwold of Winchester was a leading figure in the monastic reform movement; he created the drainage system, the ‘Lockburn’, which served as the town drain until 1875, and still survives. Also in the late 10th century, the Old Minster was enlarged as a centre of the cult of the 9th century Bishop of Winchester, Saint Swithun.

Although Anglo-Saxon England had no fixed capital, Winchester was an important centre and perhaps the most important city outside London.

There was a fire in the city in 1141 during the Rout of Winchester. Much later, William of Wykeham played a role in the city’s restoration. As Bishop of Winchester he was responsible for much of the current structure of the cathedral, and he founded the still-extant public school Winchester College.

During the Middle Ages, the city was an important centre of the wool trade, before going into a slow decline.

Jews lived in Winchester from at least 1148, and in the 13th century the Jewish community in the city was one of the most important in England. Simon de Montfort ransacked the Jewish quarter in 1264, and in 1290 all Jews were expelled from England.

The City Cross (also known as the Buttercross) has been dated to the 15th century, and features 12 statues of the Virgin Mary, other saints and various historical figures. It was restored by George Gilbert Scott in 1865, and still stands in the High Street.

The novelist Jane Austen died in Winchester on 18 July 1817 and is buried in the cathedral. While staying in Winchester from mid-August to October 1819, the Romantic poet John Keats wrote some of his most famous works.

Exclusive census analysis from data at TheGenealogist reveals that common surnames in Winchester in the 19th century that stand out against the country in general included Carter, Webb, Knight, Cooper, Martin, Newman and Andrews; plus Young, Blake, Rogers, Parker, Light, Kimber and Pearce in 1841 and Collins, Davis, Harris, Baker, Page and Hunt in 1911. The population rose from 34,000 in 1841 to 43,000 in 1911, with farming roles dominating occupations.

Leading data website TheGenealogist.co.uk has a wealth of records for Winchester and its county of Hampshire. Here is a quick run-down of what you can find (in addition to national collections):