Writer and historian Keith Gregson explores a rarely featured aspect of World War One and the online research material that can be used to find out more about the people involved. 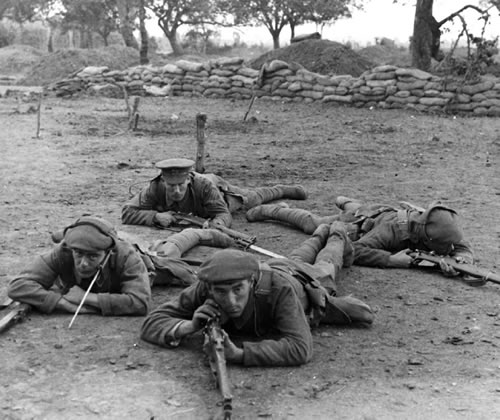 I am fortunate to have inherited a number of World War One diaries, including one written by my maternal grandfather, who died in 1952 when I was four years old. The first few pages cover his experiences when, as a volunteer, he was in training for active service. These experiences must have mirrored those of thousands of others who volunteered to join the forces in 1914.

Frederick William 'Pop' Stephens, 28 years old, single and born and bred in Millom on the western fringe of the English Lake District, volunteered for active service in September 1914 but, like many others in vital local services, was not 'released' for some time. He finally received the call to join the New Army and 13th Division Royal Engineers in January 1915. His early years were easy to research through the keyword search tool at www.TheGenealogist.co.uk, the family history data website. I added his year of birth and the keywords of 'Bootle Cumberland'. This brought up his birth record and census results (see picture below).

In 1911 he was described as a trained post office sorting clerk and telegrapher ('S C & T') aged 24, living with his mother in Millom, Cumberland. From family information we know he travelled daily to nearby Barrow-in-Furness to work in the post office.

When war broke out, his skills would have been useful on the Home Front. By 1915 they were needed on active service with 'Kitchener's Army' and it is natural that he and a number of his colleagues should have been directed towards the Royal Engineers to serve in the signals and communications department.

Pop and his colleagues were directed to sign up at Chatham in Kent and headed there via London, where they spent a couple of nights with his great aunt. In his diary Pop notes coming across "Frank Ledgard drilling on the barrack square" at Chatham. 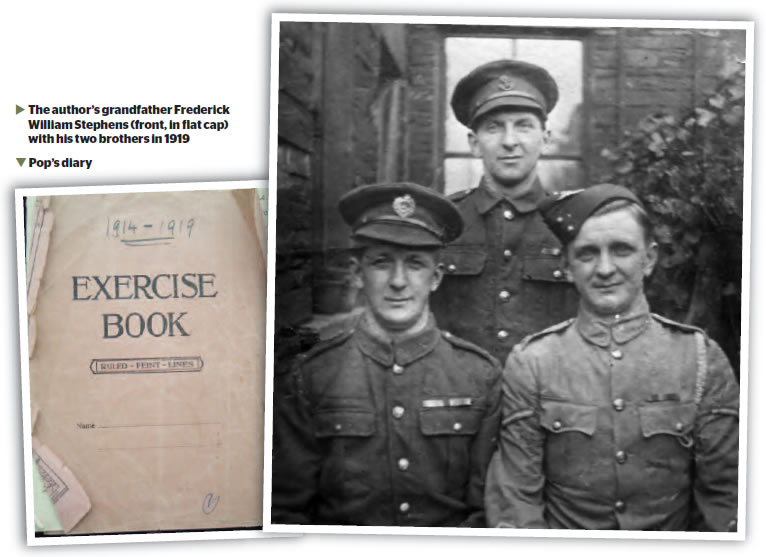 The medal records available at TheGenealogist have Frank as a sapper in the Royal Engineers – army number T/3086 and thus a territorial, likely too have been called up earlier. A further search at the site came up with a Frank Wells Ledgerd (sic) as a post office clerk age 20 in 1911 and boarding in Windermere in the Lake District - not far from Barrow-in-Furness.

Most of January 1915 was spent in getting kitted up and, as Pop wrote, "drilling and plenty of fatigue work". Towards the end of January, his section moved to Bulford Camp - a mixture of tents and huts on Salisbury Plain used for training purposes. Here he "experienced very cold weather" and had plenty of signalling practice.

A month later he moved to Brookwood near Woking. Today the area is still replete with horse riding stables so it is hardly surprising to find the following entry in his diary:

"At this place we went through a course of Horse Riding. Some had mules and others had horses – our first ride was about 14 miles – quite enjoyed it" 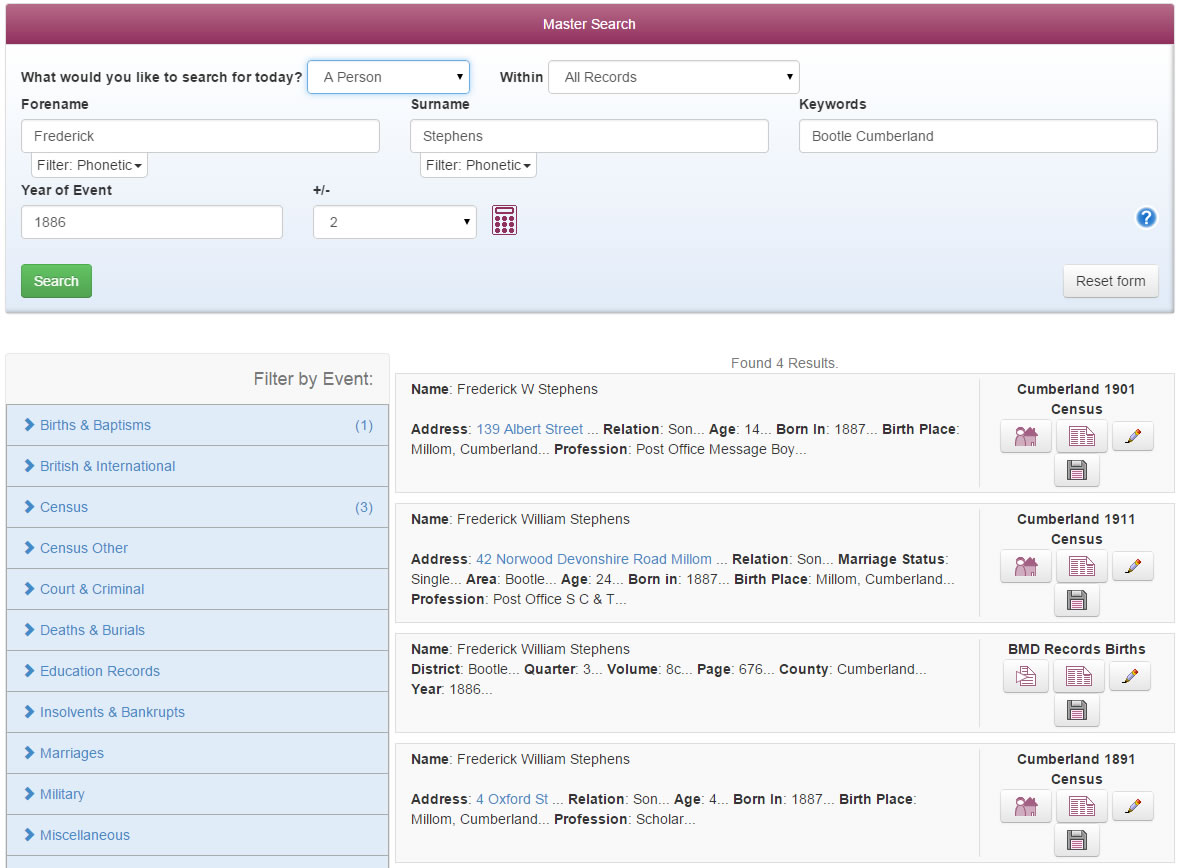 Brookwood is close to Bisley so it is equally unsurprising to discover the signallers undergoing "musketry" practice at Brookwood before going to Bisley itself for a "shooting trial". Bisley remains to this day a home for international competitive shooting. While here they also indulged in further "War Schemes"

By 10 March 1915, the engineers had been in training for over six weeks and were inspected by the King and Queen at Blackdown Camp. On the following day there was a seven-mile cross-country run and Pop noted he "came in fifth". Over the next few weeks all were inoculated and vaccinated yet, accompanied by Sandy, Pop still found time to go up to London to visit relatives.

By late March the section had moved to Cowshot Camp in Brookwood – "under canvas and snowing heavily". In what was now emerging as a regular pattern, riding, signalling and various war schemes took place across the area for a number of days ending with an inspection by the General Officer Commanding. From Fred's description this was at least an army division being prepared for action: 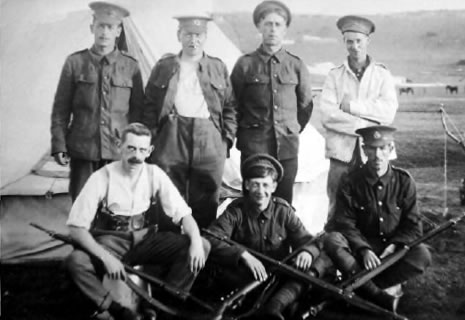 Other war schemes followed in late April with Pop and his pals sleeping in haystacks when not on duty. On 3 May, days after the initial landings at Gallipoli, the 13th Division was inspected for war mobilistaion and, after further schemes in June, was called inot action - but Pop was asked to stay behind with the others "as a reserve party".

On a date in mid/late June (omitted deliberately from the diary) he saw the others off:

"The 13th Division Signals left on - for the Dardanelles. Had a good time with our mob the night before they departed - a real soldiers' night out - gave Sandy the cuckoo farewell signal."

After the departure of the main force, those who remained spent some time at the Royal Engineers signal base at Haynes Park in Bedfordshire. "What a place it was," Pop noted. "We were glad when we left."

By the end of the month the reserve unit was in Woking and on 29th had a night out before setting off for Avonmouth from where it sailed via Malta and Egypt to Gallipoli. Ironically, after months of training in the cold and snows of Salisbury Plain, the unit was destined to spend months trapped and stationary on a sun-drenched Turkish beach - but that is another story.

I know from my grandfather's war diary that his friend and colleague 'Sandy' Bayne died during the conflict. The Military Records search engine at www.TheGenealogist.co.uk site was useful in helping me discover more about what happened to him.

By entering his full name, William George Bayne, and combining it with dates of 1916 +/- 5 years and the keyword 'R.E.' (Royal Engineers), I was led to his details in both the Soldiers Died in the Great War and the Roll of Honour sections. Combining information given in TheGenealogist's indexes and the digitised images to which the indexes led, I was able to confirm by his service number (62357) that this was the same man who had joined up with Pop.

By July 1916, he had moved up to the rank of Acting Sergeant and was still in the Signal Company of the Royal Engineers and was attached to GHQ in Mesopotamia. Here he died on the 16th of the month (of disease according to the diary).

The records also noted that his birthplace was Hurst, Lancashire (a hamlet of Ashton) and that he had enlisted in Barrow-in-Furness. Sandy and Pop parted company in terms of their military careers at the end of 1915 and Pop was near Ypres at the time of Sandy's death.

On a research front it is worth noting that information on names, dates and areas of service should be entered into search engines in a number of different ways (e.g. R.E. or Royal Engineers) in order to maximise access to information. When entering dates for the war, trying 1916 +/- 5 years should ensure reaching any surviving information relating to 1919-21 when many soldiers were still serving.

As noted in the main text, it was natural that Pop and his colleagues should head for the Royal Engineers. Signalling and communication was handled in the RE then as the Royal Corps of Signals was not established as a separate entity until two years after the war. Pop's diary indicates that he joined up alongside "Sandy Bayne (P.O. comrade)" and "Grisdale", linking up with them on the "at Barrow and Carnforth respectively".

www.TheGenealogist.co.uk's collections of medal records reveal that general service medals were later granted to Royal Engineers 62356 Frederick William Stephens, 62357 William G Bayne and 62347 Morris H Grisdale. The closeness of these numbers indicates that they had joined up at the same time.

TheGenealogist.co.uk's keyword search came up with five immediate hits on a Morris Henry Grisdale with the keyword of Cumberland. 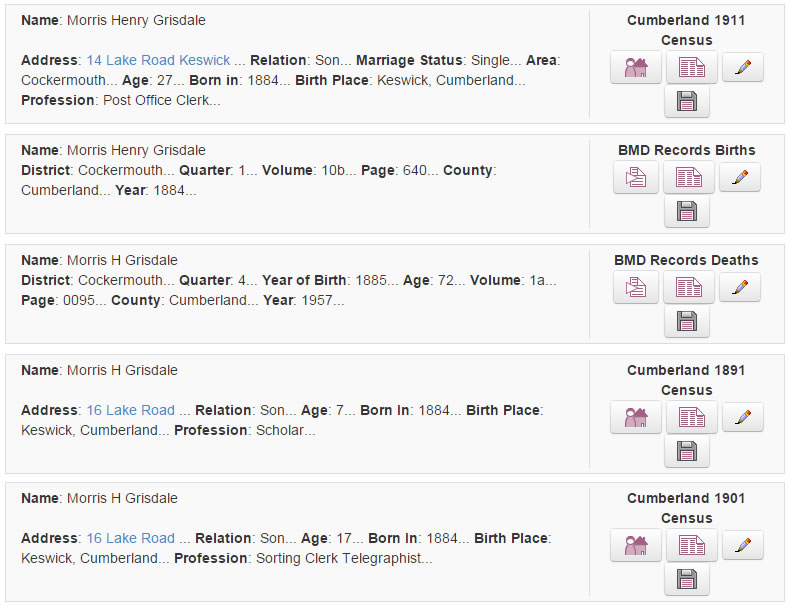 'William G* Bayne" and the keyword of 'Barrow' (From Pop's diary) came up with two general hits – his marriage in 1907 and his residence in Barrow as a 'Post Office S C and T', aged 30 in the 1911 census, which also tells us he was born in Ashton, Lancashire.

Morris Henry Grisdale's case also shows that it is worthwhile flagging up unusual names on a general internet search engine. Despite Morris's family background being entirely Cumbrian, 'Googling' his name led to a site dedicated to soldiers with Leicestershire connections. Here there is a postcard labelled as follows:

"A group of Royal Engineers in France on the 30/11/1917. one of the soldiers is SPR 623347 Morris H Grisdale, the postcard was sent by him to his parents in Clarendon Park Road Leicester."

Morris's service record is one of the few to have survived and references his brother John as next of kin and living in Clarendon Park Road.