The Time Machine: tracing ancestors from childhood to adulthood

Following an ancestor's life can lead us on a path through time and place, says Nick Thorne 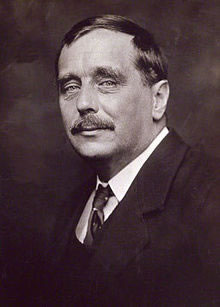 Tracing ancestors from childhood to adulthood will often lead us on a trail through time and place, as that person moves from one town to another.

H G Wells, author f The Time Machine, and acclaimed as a scientific and social prophet, is a good example. Born in Bromley, at a time when his father was running a china shop in the town, it is clear that his family moved several times.

It is easy to find the birth of Wells by using the Births and Marriages within TheGenealogist's Master Search. Herbert George Wells was born in the last quarter of 1866 in the district of Bromley, Kent. The result given here provides us with all we need to buy a copy of his birth certificate from the General Register Office. This shows that his birthday was 21 September 1866.

By clicking the Parent's Potential Marriage icon on the transcript, we discover that the marriage between his parents, Joseph Wells and Sarah Neal, takes us to London in 1853. 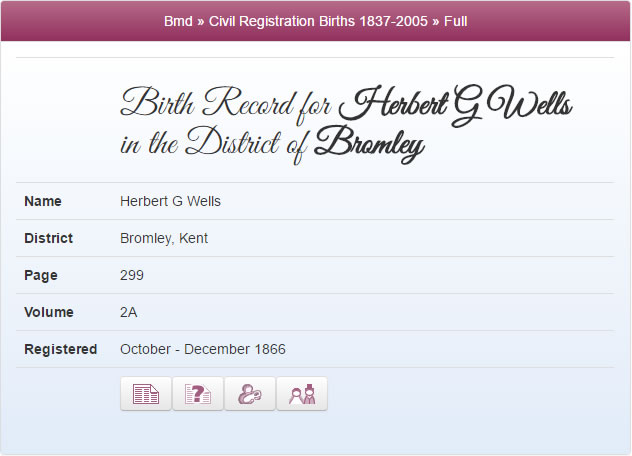 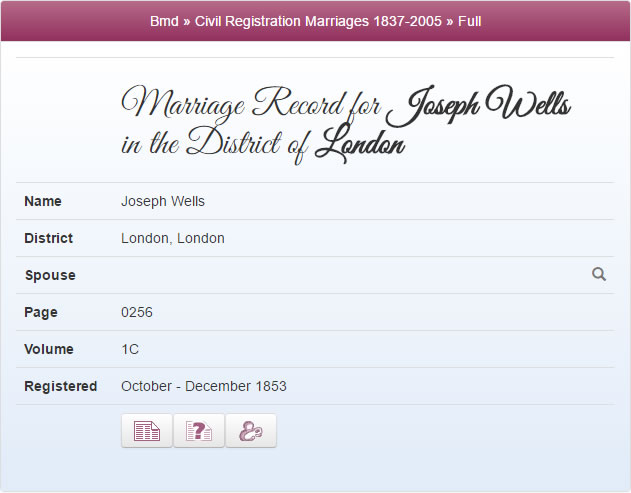 Sarah had been working as a lady's maid at Uppark in West Sussex. It was there that she met her future husband, when he became one of the gardeners. Having worked his way up through various gardening jobs elsewhere, Joseph Well's real passion was not gardening but cricket. He would go on to play for Kent in 1862 and 1863, being best known for his abilities as a fast bowler. Unfortunately, however, he suffered an injury that curtailed his professional career.

From an entry in the pages of Sarah's diary we know that, to be begin with, cupid's arrow sailed right past her – in the journal she noted that her suitor was "peculiar." The two did, however, become close and when Sarah left Uppark, to look after her ailing mother, Joseph soon resigned his position. With the death of both her parents, and her father's creditors circling, she and Joe married in London.

We pick up the trail in the 1861 census for Bromley, which shows that Joseph had been born in 1829 in Penhurst, Kent. His wife claimed to have been born in Chichester in 1826, though it is probable that she was older than this. 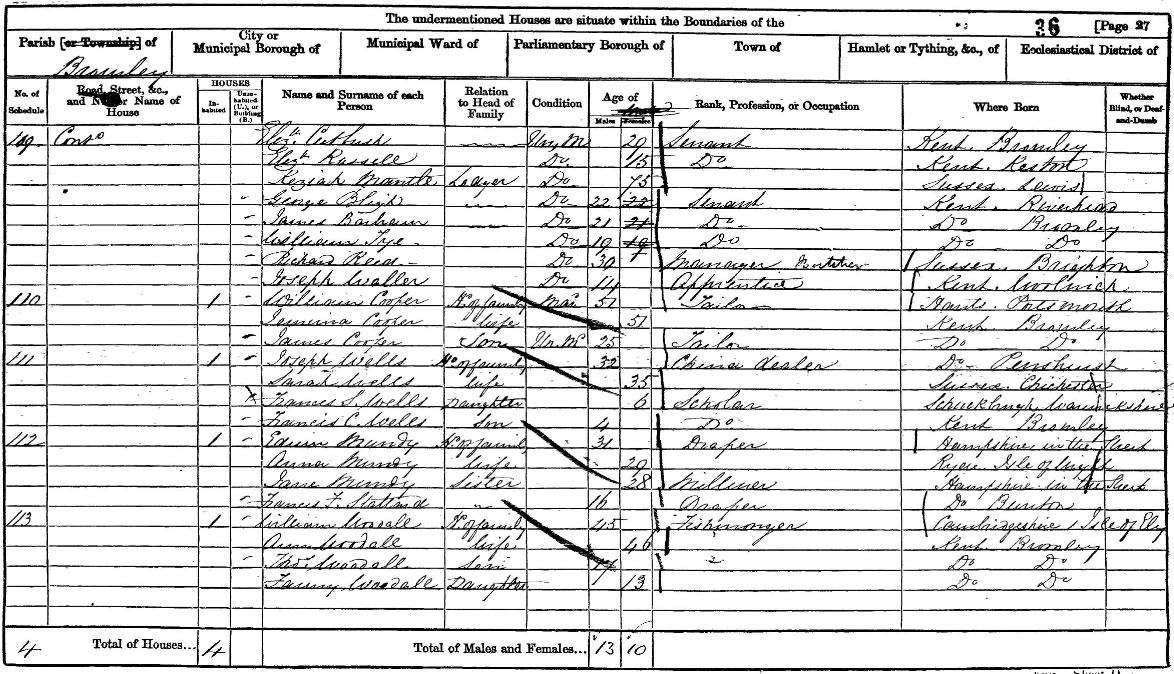 The census also reveals the details of Herbert's siblings. We can see that his eldest sister, Frances, was born in Warwickshire four years earlier. This suggests that the family relocated from the south-east to the Midlands. Further research shows that in April 1954, Joseph had moved with his new wife to Shuckburgh Park, near Daventry, where he took up the post of head gardener.

Joseph lost this job at Shuckburgh because according to some stories, of an outspoken disagreement with his employer. The family then moved on to Bromley, Kent where Joseph took over a china shop from his cousin. It was in 1866 that Herbert George Wells, or Bertie, was born – the couple's fourth and last child. His elder sister had sadly died two years earlier, as recorded in the death indexes on TheGenealogist.

The shop was not a great money maker and so H G Wells's mother returned to Uppark between 1880 and 1893 – this time as a housekeeper. This allowed Bertie to spend part of his late boyhood at Uppark and so explore its library, opening him up to literature. A telescope there also allowed him to peer into space and wonder about the world beyond.

With his middle class family in an impoverished state, the teenaged Wells was briefly apprenticed to a draper. He didn't enjoy the work and was rejected after the first month's trial He then found a post as a student-teacher, assisting one of his uncles in a National School. This ended when his relative was fired, after having his qualifications called into question. Bertie was then apprenticed to a chemist, but again didn't make the grade. As a stopgap he entered a grammar school. The head wanted to improve the school's results, and spotting Bertie's potential to pass exams, gave him free board.

Another spell as a draper's apprentice was then forced upon Bertie by his mother. As Wells approached 17, he persuaded his parents to let him return to the grammar school, this time as an assistant. From here he won a scholarship to the Normal School of Science later (Imperial College London), studying under the great zoologist TH Huxley. This period inspired Well's science fiction writing. His socialist politics drew him to join the Fabian Society, and he became a writer of textbooks, short stories and several reviews.

The Time Machine (1895) was the first of his hugely popular and prescient 'scientific romances', which foresaw the splitting of the atom, travel to the moon and aerial warfare. He was a prolific novelist, famous for writing science fiction and also for his works of comic realism.

As he grew into his twenties and attending college in London, Bertie fell in love with his cousin Isabel Wells, whom he had met while lodging with his Aunty Mary. On 31 October 1891, the two married and by using the BMD records on TheGenealogist, we can find out the address where Herbert lived, his aunt and Isabel lived, which was in the St Pancras area of London.

Well's marriage to Isabel wasn't to last. By searching the records again, we can find his second marriage. This time, it was to a woman who he called Jane; however, his new wife, who had formerly been his student, was really called Amy Catherine Robbins. It is worth remembering, in searching for ancestors, that they may have had different legal names from those they went by in everyday life.

By 1901, HG Wells was doing well. He and Jane were now living in Folkestone, Kent, in a house that was built specially for his family.

Moving forward to 1911, however, we can see that Spade House had been sold. The Wells were now living in Hampstead, North London. 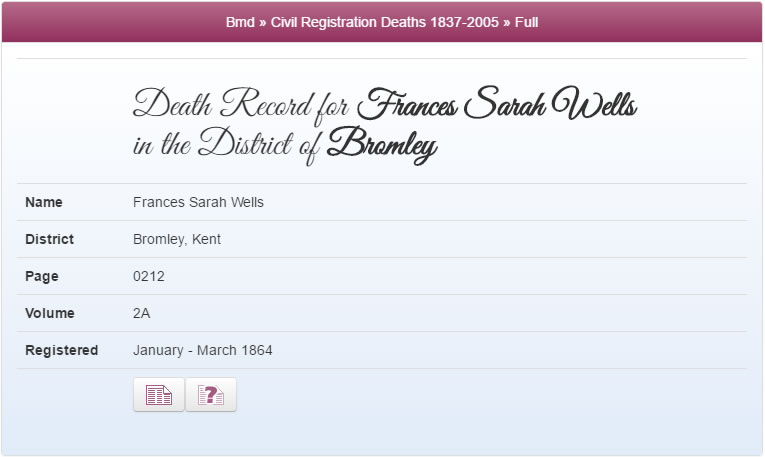 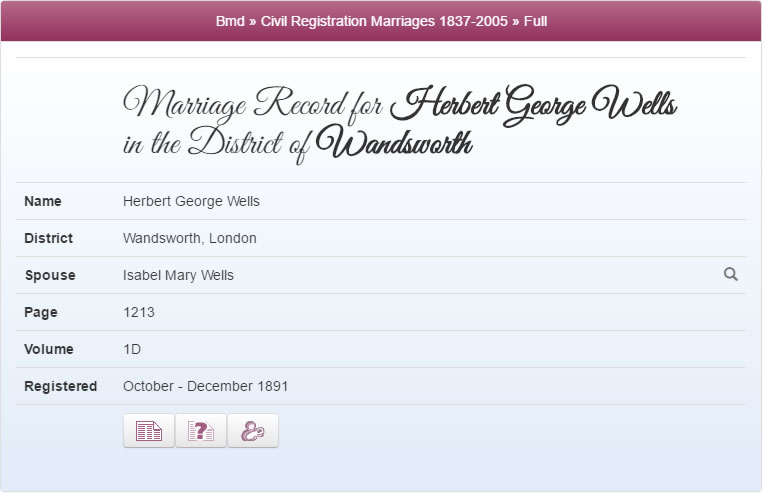 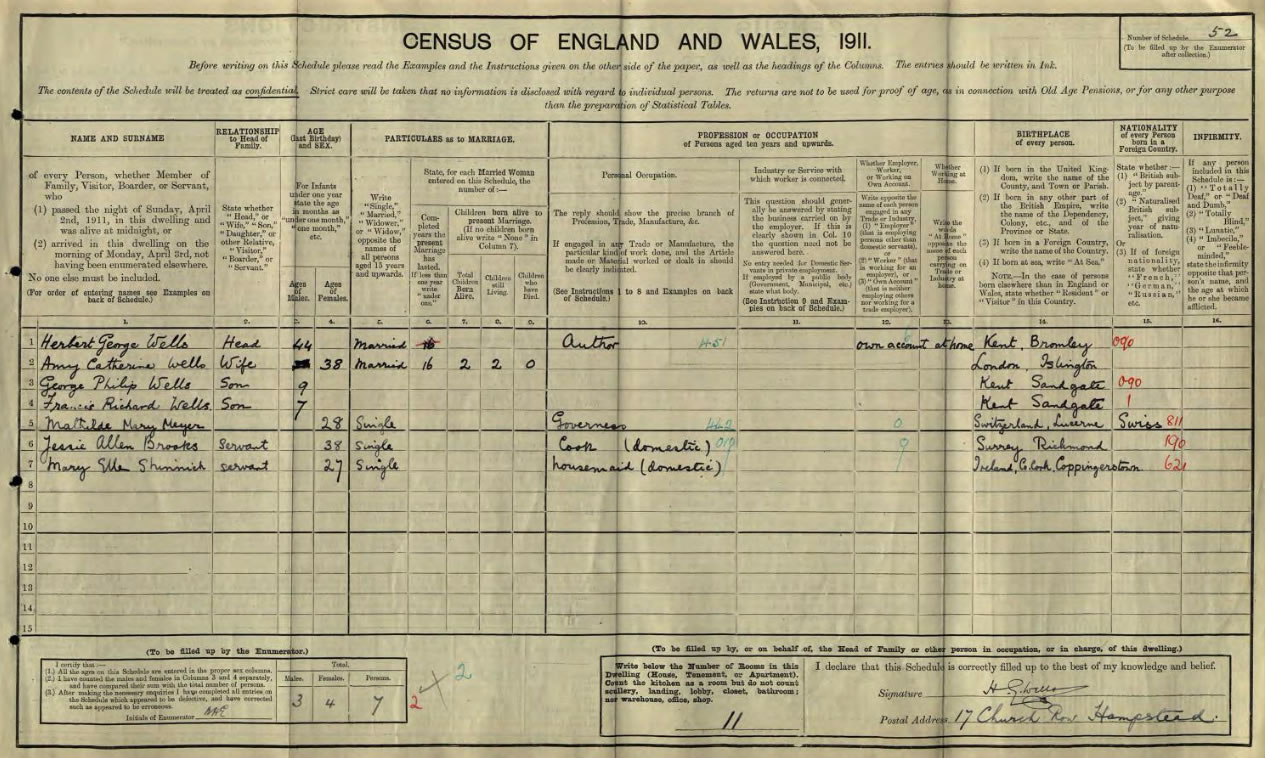 Return – The 1911 census shows that Wells had returned to London

With the census records and birth, marriages and death indexes on TheGenealogist it is a simple matter to follow a timeline of your ancestors as we have done here for the Wells family.