The Soldier, the Priest and the Count

Nick Thorne looks at one family with three leaders of men – a brave soldier, a Catholic priest who risked capture by the enemy and a one-time prime minister of a European state 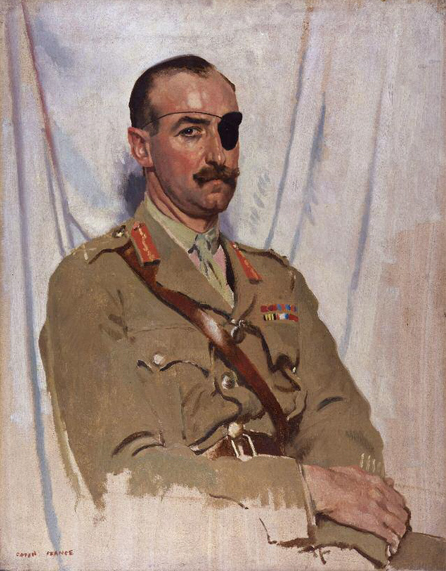 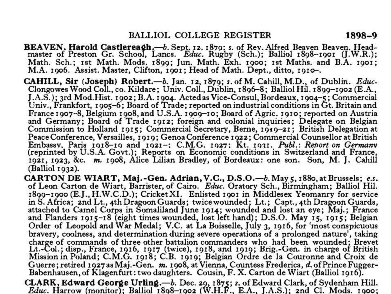 Balliol College Register in the Education records on TheGenealogist

Sir Adrian Carton de Wiart was born on the 5th of May, 1880, in Brussels. He was the eldest son of Leon Carton de Wiart, a lawyer (of Brussels and Cairo) who had qualified as a doctor of law in Brussels in 1877, and his mother was Ernestine Zephirine-Emilie Wenzig. Sir Adrian’s paternal family were Belgian aristocrats with his father being a Knight of the Belgian Order and also of the Grand Cross of the Egyptian Orders of Osmandiah and Medjidieh. Adrian’s mother and father had married in Brussels on the 15th of October 1879 and when Adrian was three, the family moved to Alexandria, Egypt where his father was a leading counsel in the courts there. In later years he would also be called to the English bar as a barrister at law and became a naturalised British subject on the 9th of October 1900. Sir Adrian himself would also take on British nationality in 1907 while he was serving with the British Army in South Africa, as we can find by searching TheGenealogist’s Immigration, Emigration & Travel records for naturalisation records. By this time he had already been an officer in the British Army for a number of years and so this had seen him lose his Belgian nationality.

This soldier, the details published in various reports tell us, was an extraordinary man who served in the Boer War, the First World War, and also the Second World War. Lieutenant General Sir Adrian Paul Ghislain Carton de Wiart VC KBE CB CMG DSO had been ‘shot in the face, head, stomach, ankle, leg, hip, and ear; was blinded in his left eye; survived two plane crashes; tunnelled out of a prisoner-of-war camp; and tore off his own fingers when a doctor refused to amputate them’. For many, this catalogue of injuries would put them off the military for life; but not so this warrior who when describing his experiences in the First World War, wrote in his book Happy Odyssey, ‘Frankly I had enjoyed the war.’

Sir Adrian’s parents divorced when he was six, and his father remarried to Mary James in 1888. The young Adrian Carton de Wiart was sent to England to be educated at the Oratory School, Edgbaston, and afterwards at Balliol College, Oxford, where he studied law. The education records on TheGenealogist reveal his entry in the Balliol College Register, which gives a sketch of his remarkable life including his military service.

Ditched the law to run away to war

At the outbreak of the South Africa War in 1899 he gave up studying and enlisted as a private soldier by lying about his age and using a shortened version of his name to become simply Trooper Carton. He was wounded in the stomach and groin in South Africa early on in the Second Boer War and was invalided home receiving the Queen’s Medal with three clasps, His injuries, however, didn’t put him off as we are able to see from looking at the Hart’s Army List 1908 that is found in TheGenealogist’s Military records. Adrian Carton de Wiart was, by then, serving as a junior officer in the 4th Dragoon Guards. Having received his commission he was appointed as the aide de camp to Lieutenant-General Commanding the Forces in South Africa from 29 July 1905.

Promoted to be a captain on 6 February 1910, he can be followed in the Regimental Histories that can be found in TheGenealogist’s military records. In these we are able to pick him up becoming the Adjutant of the Royal Gloucestershire Hussars Yeomanry on 1 January 1912. Another entry in these histories records him giving up this appointment on 23 July 1914 before sailing for Somaliland.

It was while he was deployed with the Somaliland Camel Force between July 1914 to March 1915 that he lost an eye and a part of an ear. His war service saw him then fighting in Flanders, where he was severely wounded several more times, and he then lost his left hand at Zonnebeke. A search of the Casualty Lists on TheGenealogist returns a number of records for this extraordinary officer.

Sir Adrian Carton de Wiart is recorded in the online database of Medal Index Cards, 1914-1920 on TheGenealogist as a recipient of the Victoria Cross [London Gazette, 9 September 1916], for his behaviour at La Boiselle, France 2-3 July 1916. TheGenealogist’s military record results also reflects his numerous entries in the Mention in Dispatches records.

Searching the Peerage, Gentry & Royalty records on TheGenealogist, as another line of research, finds Sir Ardian in Burke’s peerage 1921 under the Order of Knighthood where he is in the list for the Order of St Michael and St George.

Sir Adrian had several half-siblings. His mother, having remarried, had another son and daughter with her new husband and his father’s second marriage produced another half-brother and three half-sisters for Adrian. Sadly two of his three half-sisters died very young.

While searching for Sir Adrian in the military records, an entry in the section for WW1 Campaign Medals identifying a Right Reverend M E Carton de Wiart, who had been awarded this medal set, came to light. Further research reveals that this had been his first cousin, a Roman Catholic priest called Maurice Emanuel Carton de Wiart who was ‘commanding’ the St Andrews Hospital in London NW2. This had been an institution in Dollis Hill that had been set up in 1913 by the Catholic Church and in the First World War it became a military hospital. The Right Reverend Father was not just a stay-at-home administrator: this brave churchman led a nursing party that was one of the first to go into a theatre of war. Visiting a Belgian village of Hastière he and his party escaped just before it was overrun by the German enemy.

The Right Reverend Monsignor Canon Carton de Wiart also held from 1908 the post of assistant diocesan treasurer for the Roman Catholic diocese of Westminster and so a search of the Residential, Trades and Telephone directories finds several entries for him at Archbishop’s House, Westminster over the next three decades.

So we have seen that Sir Adrian’s cousin was not just a humble parish priest, but a man who was honoured by his Church with the titles of Monsignor and Canon. The secular authorities in Britain awarded him an OBE and he was also recognised by the French and Belgian governments. But Sir Adrian had another first cousin who also held an eminent position – this time at the top of Belgian’s government.

This first cousin of our notable soldier was, at the time of the First World War, the Belgian minister of justice, Monsieur (later Count) Henri Carton de Wiart. We can find him captured in a photograph published in an edition of The Great War for 9 January 1915 from searching TheGenealogist’s Newspapers & Magazines collections. Wikipedia tells us that Henri was born in Brussels, that he studied law and, unlike his soldier cousin, actually did become a lawyer. In 1894 he co-founded the cultural review Durendal. He was elected to the Belgian House of Representatives as a left-wing Catholic Party member in 1896 and remained a member of parliament in Belgium until his death in 1951.

Besides serving as Belgium’s prime minister from 1920 to 1921 in a government of national union (Christian Democrats, Liberals and Socialists), he was the minister of justice from 1911 to 1918. From 1928 to 1935 he was the Belgian delegate to the League of Nations and was their minister of social welfare from 1932 to 1934.

After the German invasion of Belgium in May 1940, Carton de Wiart accompanied the Belgian government into exile in London.

Having been given the honorific title of minister of state, Carton de Wiart again served as minister of justice for a short time in 1950.

Researching this British-Belgian family has revealed three leaders of men in their own spheres. From a soldier, who would seem to have taken being wounded as an occupational hazard, to a Roman Catholic priest who not only was an administrator, but had led from the front by taking a nursing party into a war zone. The third member of this illustrious group was a politician who was a Belgian member of parliament for 55 years who had once held the highest office of Prime Minister. Using TheGenealogist we have been able to add records to the family stories of these men who, amazingly, all came from the same generation of the same family. 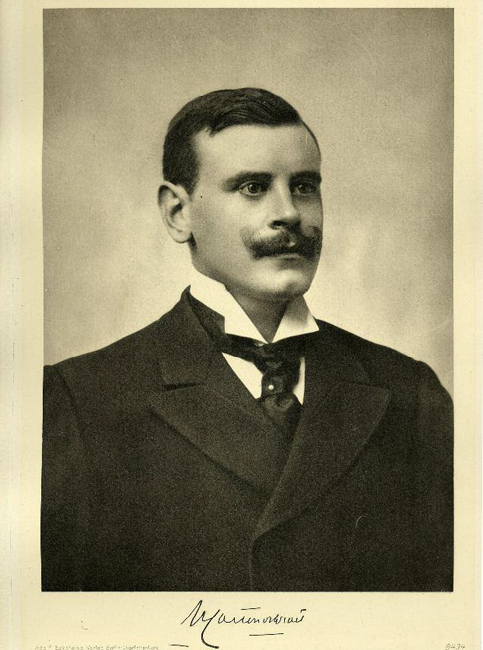 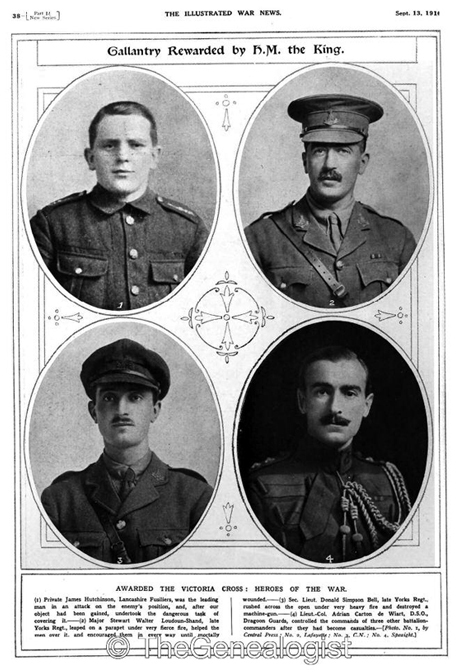 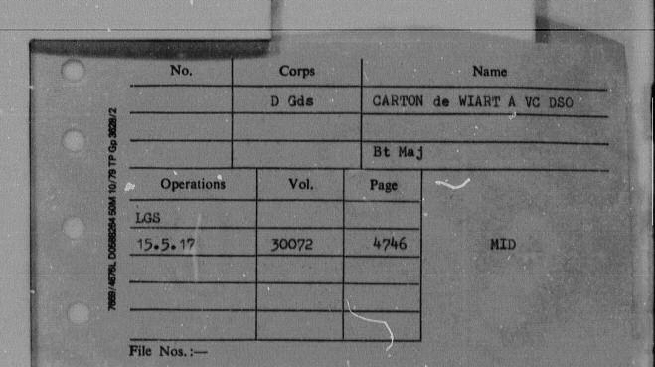 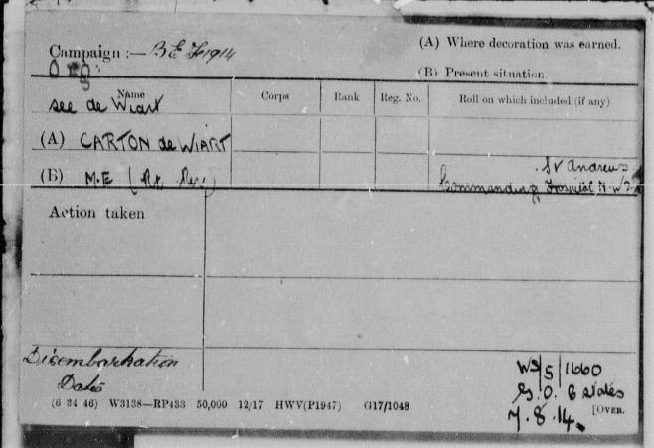 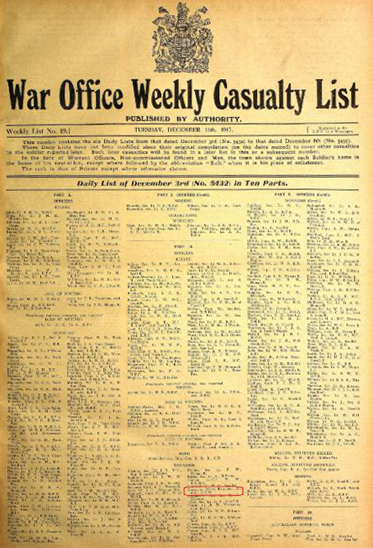 One of a number of Casualty List records for Sir Adrian Carton de Wiart, 1917 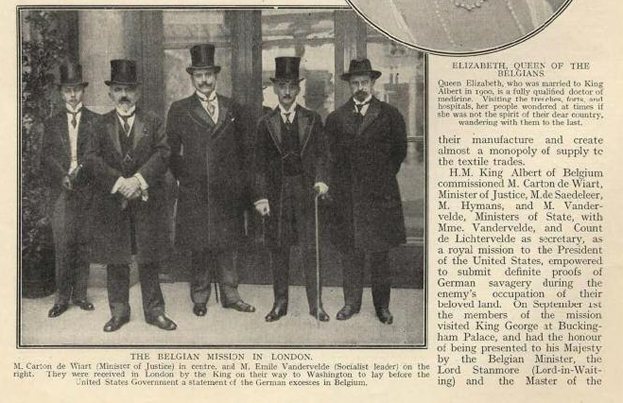