The Birds without eggs

Nick Thorne investigates the family behind a favourite British brand

In December 1878 a Birmingham chemist and inventor passed away aged 67. As a fellow of the Chemical Society, his obituary, in its journal, discussed at length his many skills and research. What the eulogy failed to even mention, however, was his 1837 invention that made him a household name, with his product still being a well-known brand to this day.

Born in Nympsfield in Gloucestershire, in 1811, Alfred Bird was the son of a lecturer called John Bird, who had been based in Windsor and Eton where he had taught astronomy at the famous public school. Alfred went up to Birmingham to become an apprentice of a chemist called Philip Harris and learn the profession. By researching in TheGenealogist’s Trade, Residential and Telephone Directories it is possible to find Harris’s shop in the 1835 Pigot’s Directory of Warwickshire at number 8 the Bull Ring. Once Alfred obtained his qualifications, however, he went on to open his own shop and so in later directories, such as the 1849 White’s Directory of Birmingham, Bird’s own premises can be found at nearby 15 Worcester Street in Birmingham.

The 1841 census reveals that Alfred and his wife Elizabeth had been living at Philip Street in the St Martin’s area in that year. Ten years later on, in 1851, the Birds had moved to leafy Edgbaston where they were living in Worcester Terrace in one of the main thoroughfares into the city: the Bristol Road. This record reveals that Arthur Bird was now himself a master and by this time was employing three men in his chemist and druggist shop. This census shows us that the Birds had two daughters and a baby son, also called Alfred Frederick. This boy would eventually grow up to join and then take over his father’s commercial food enterprise, a venture that was once a sideline to the chemist business but which would grow to dwarf the pharmacist side. The 1861 census reveals that there was also an elder brother, Charles, and by this time Alfred’s chemist business was employing two men, two apprentices, one lady and ten girls.

TheGenealogist’s Newspapers and Magazine collection includes a piece in The Illustrated London News from 28 August 1852 referring to Mr Alfred Bird, of Birmingham having recently invented a device to perfectly filter water. Then on 18 November 1865 another article reveals that Alfred Bird Snr had created a water barometer that was considered to be more sensitive than a mercurial one. These innovations, however, were not the invention that made him and his family their fortune and which the Chemical Society conspicuously left out of his obituary.

It had been in 1837, at the very start of Queen Victoria’s reign, that Alfred had sought to help his wife’s allergic intolerance of eggs and yeast. The chemist was able to mix cornflour, colouring and flavouring instead of egg to create an imitation egg custard. The story that has been handed down is that ordinary egg custard was usually offered to the Bird’s dinner guests. On one occasion, however, the custard meant for Elizabeth was accidentally offered to some of their house guests and with its acceptance Alfred Bird realised that his invention had a wider market. Having founded a company to produced commercial quantities of his custard powder in 1843, Bird went on to devise the form of baking powder that is still in use today by modern bakers. The firm was soon manufacturing vast quantities of baking powder, as well as the custard powder and by 1844 the egg free custard powder was being advertised nationally, so making Bird’s name known in every household.

With the war in the Crimea, in the 1850s, Bird was able to help the soldier’s appalling diet on the front by persuading the sceptical War Office to use his baking powder to provide fresh bread for the men, as well as puddings for the sick and wounded. The head of the War Department, The Duke of Newcastle, had demanded that a sample should be baked under supervision and then sent to him. On finding it to be good, the British forces in Crimea were then able to eat bread courtesy of Bird’s baking powder and not rely on bread yeast that had been so difficult to store under the conditions of war.

The dynasty continued when Alfred Bird’s son joined his father’s company in 1867 and by 1878 he had assumed full control of the business following the death of his father. Continuing his father’s innovative product development he introduced new products such as a powdered egg substitute, jelly crystals and tablet jellies and began an ambitious programme of modernisation and expansion at the factory in Digbeth, Birmingham. 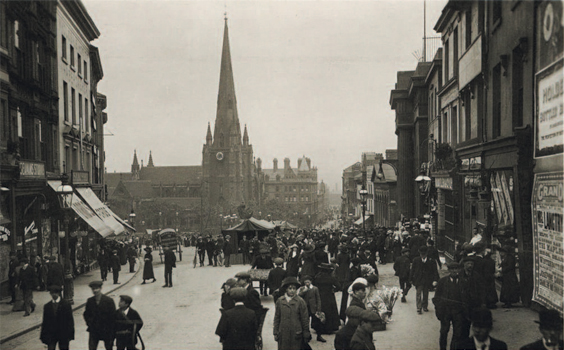 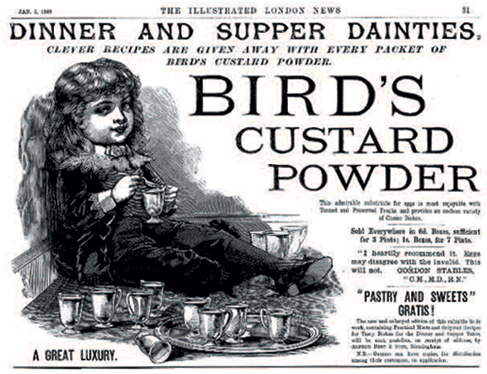 In 1891 the Birmingham census reveals that Alfred Frederick Bird had at that time a large house in the Mosley area of Birmingham. Fascinatingly, a search for the family in the 1901 census locates them at the Birmingham Grand Hotel on census night. Throwing the researcher off the scent is that Alfred has his occupation recorded as a cycle manufacturer. His sons, Geoffrey Bird and Oliver are enumerated as a director of a cycle company and a secretary of a cycle company respectively. Further research shows that the Birds were indeed directors of Rudge-Whitworth cycles and Alfred had been a good cyclist in his time even breaking a record in his youth for tricycling from Land’s End to John O’Groats.

We can tell that the family moved down from the Mosley district to live in Solihull, south east of the city, as in the Kelly’s Handbook to the Titled Landed and Official Classes 1918 from TheGenealogist’s Peerage, Gentry and Royalty gives us his address as Tudor Grange, Solihull, Birmingham.

By 1900 Alfred Bird & Sons Ltd had became a public limited company and five years later Alfred Frederick Bird retired as the chairman and managing director, to go into politics. Not successful at first, but in 1910 he won the seat in Wolverhampton West. Alfred Frederick Bird received his knighthood in 1920, as we can discover from finding his entry in Burke’s Peerage, Knightage and Companionage 1921, also searchable on TheGenealogist.

Sir Alfred Bird died on 7 February 1922, aged 72, as a consequence of being run over by a car in Piccadilly, London. His eldest son, Robert, succeeded him to the baronetcy and also went on to win the March 1922 by-election to succeed his father as the MP for Wolverhampton West.

There are also a number of entries to be found for members of the next generation of the Bird family in Armorial Families Volume 1 on TheGenealogist. These records are useful when you want to discover the names of spouses and those of their children in order to follow the family tree back further. In this case it also reveals to us that one of Sir Alfred’s sons, Oliver, became a captain in the Welsh Guards and received a Military Cross. We can then turn to the extensive military records on TheGenealogist to find more.

In the First World War, Bird’s products were supplied to the troops as well as being a plentiful favourite at home. As we can see, from an advertisement in The Sphere newspaper from August 1914, Bird’s were at pains to point out the nutritional value of their custard, that there was no shortage of their powder and that they had patriotically held their prices while working hard to supply the military and the public.

The company was taken over after the Second World War by the General Foods Corporation. That business was itself taken over by Philip Morris in the 1980s and then merged into Kraft Foods to be sold on in 2004 to Premier Foods. Although the Bird’s Custard product remains, it is now merely a brand. But it is one that is instantly recognisable today as it had been in Alfred Bird Snr’s time when the Chemical Society omitted to make mention of its invention in his obituary. By researching in trade directories, census, peerage, gentry and royalty records and the newspapers and magazines collections on TheGenealogist we have been able to add quite some detail to the story of the Birds of Birmingham. 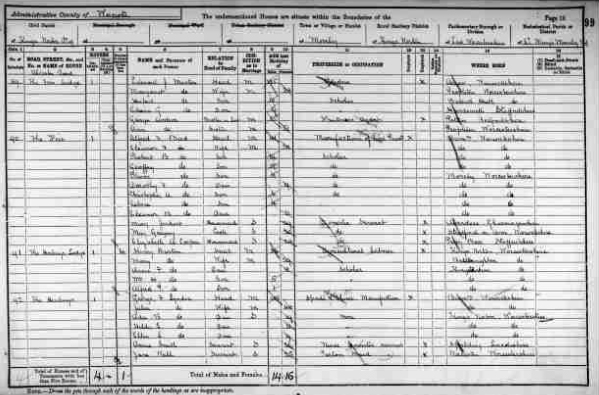 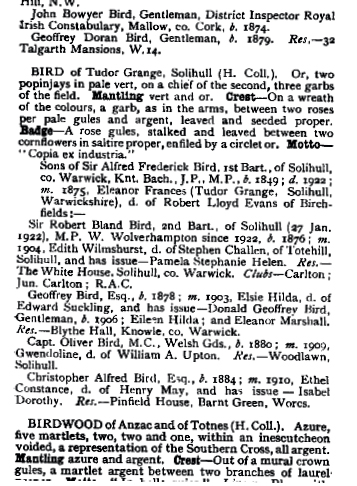 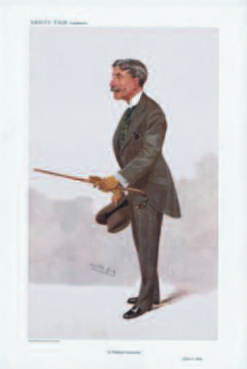 Caricature of Alfred Frederick Bird by ‘Spy’ in Vanity Fair, 1908 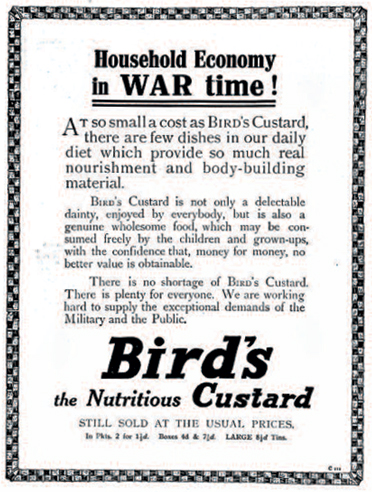