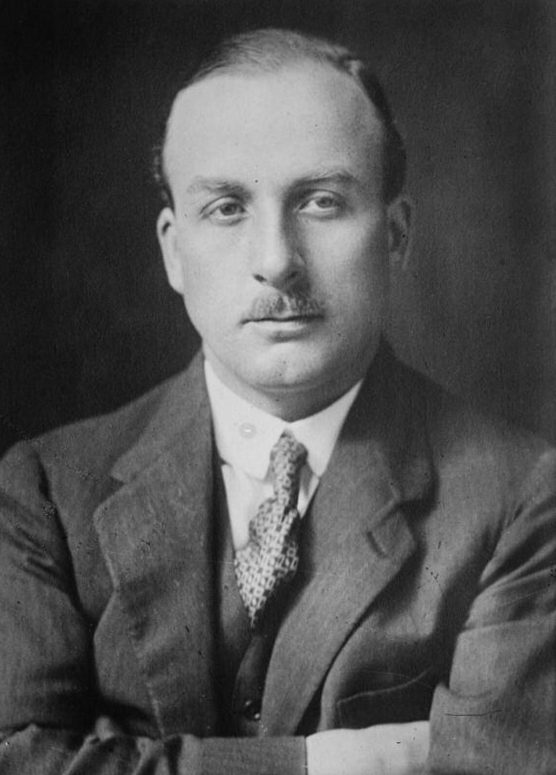 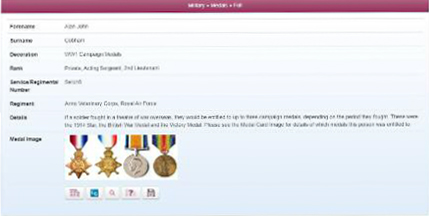 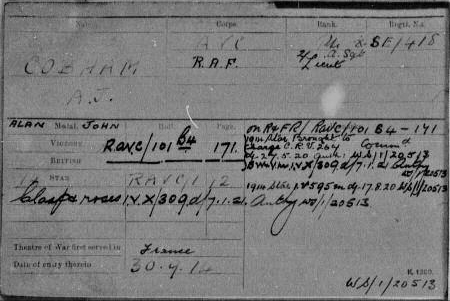 Medal record on TheGenealogist for A.J. Cobham of the Army Veterinary Corps

Born on 6 May 1894 in Camberwell, London, Alan John Cobham was fascinated by flight from an early age. In his boyhood he built and flew giant kites on Streatham Common, London, which only occasionally ended with a crash landing. After a visit to Brooklands Aerodrome in Surrey, it is said, he was prompted to build a bicycle-powered flying machine along with a friend – though this flying machine never managed to get airborne. When he was a teenager, and his school education had run its unspectacular course at Wilson’s Grammar School, it was not aviation that he gravitated to but farming. His agricultural job only came about, however, after a very brief spell in the clothing wholesale business. The farm at Brockbury on which he went to work had been owned by his father’s cousin and yet, aged 16 in the 1911 census, he is recorded at home in Streatham and with no occupation listed. The book A Time to Fly written by Alan Cobham himself (Shepheard-Walwyn, 1978) tells of some financial difficulties that caused him to quit as a farmhand at the end of 1913. With his career in agriculture cut short, Alan returned to London and according to his book he found employment with Hicks & Smith, a lingerie company.

His father, Frederick, is recorded in the 1911 census as having been born in Upton-on-Severn, Worcestershire some 50 years earlier. Frederick Cobham is, at this time, an employer and a ‘manufacturer of ladies underclothing’ and so it is easy to speculate that this is how Alan obtained a job in this industry in his early years. Alan’s mother, Lizzy, was aged 45 in this census which also reveals that she was a Londoner, having been born in Walworth in Southwark. The census also provides us with the information that Lizzy and Frederick had been married for 22 years and in this time they had brought five children into the world – though sadly three had already died by 1911. However Alan and Vera, his remaining 12-year-old sister, were present at their parents’ eight-room home, 59 Baldry Gardens, on the night of the 1911 population count.

Alan Cobham’s work in agriculture had involved him in caring for horses and so when World War One broke out he used the strength of this experience to join the Army Veterinary Corps. His knowledge of equine care meant that he quickly made it to rank of veterinary sergeant. Even while he was still in his twenties his duties meant that sometimes he was responsible for the care of over 1500 horses.

When investigating a family story, whether it is for our own ancestors or for someone famous, it is often fruitful to expand our research to take a look at some of the interesting record sets other than the census and births marriages and deaths that can be found online.

A search of the First World War Medal records on TheGenealogist, for example, discovers Alan Cobham’s medal entitlements. What we can learn from this record is that his rank changed over time from private to acting sergeant, and then to that of a 2nd lieutenant. Towards the end of the war his passion for flight had seen him apply to move from the Army Veterinary Corps to join the RFC, which quickly reconstituted as the Royal Air Force. Using the medal card information we can discover that he obtained a commission in May 1918. Further research reveals that he was then posted to Manston, where he undertook flying training. At last he was able to fly!

When the end of the war came in 1918, Alan Cobham left the RAF and as a trained and natural pilot he was on the lookout for an opportunity in aviation. For a record set that is useful for discovering more about aviator ancestors, we can turn to the 1936 edition of Who’s Who in British Aviation that can be found in the Occupational records on TheGenealogist. Reading his entry tells us that he ‘started civilian flying, 1919, on joyriding and aerial photography; joined De Havilland Aircraft Co., 1921’ and then the account provides a list of a number of flying tours that he made, his competition results, directorships held, plus books and films that he made.

Wanting to allow the public to experience flight, Alan Cobham and his partners formed the Berkshire Aviation Company providing pleasure flights in an Avro 504K biplane from May 1919. While they were successful at first, the business then went into debt and Cobham had to leave aviation for a period. He was able to return to the air when a job became available with the Aerial Photography Department in the Aircraft Manufacturing Company (Airco). Alan Cobham flew, with a cameraman on board his aircraft, taking aerial photographs of famous sites all over Britain. He then joined De Havillands as an air taxi pilot. Meanwhile the aerial photograph business was taken over by Aerofilms and the De Havilland Hire Service agreed to provide them with the aircraft and pilot – that pilot was Alan Cobham. With aerial photographer Albert Oscar Russell they were seen as a very good team contributing to the success of Aerofilms in the early days and the many pictures of the country taken by them from the air.

The next phase of his life, as we read in Who’s Who in British Aviation, encompassed long-distance air tours. These flights began with Europe before taking on the challenge of Northern Africa and Southern Europe and even further afield to Australia. Turning our attention to search the Reference Books on TheGenealogist we are able to see a picture of his flimsy open-cockpit biplane in the book The Wonder Book of Aircraft 1930. This De Havilland DH.50 is the plane that Cobham used to fly out and home to Rangoon, South Africa and Australia, and seeing its seemingly insubstantial air-frame brings home quite what a feet this had been. As we can also see from another photograph in the book, after completing his 28,000 miles to Australia and back Alan Cobham landed on the Thames outside the Houses of Parliament. The book also lists notable records that he gained with the details of miles flown and the times that he took to complete these pioneering flights. 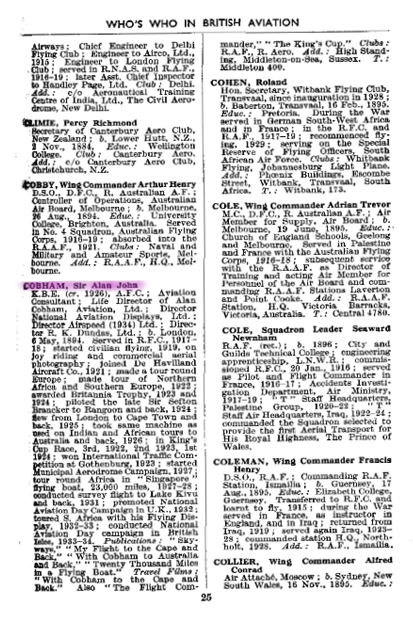 1936 edition of Who’s Who in British Aviation 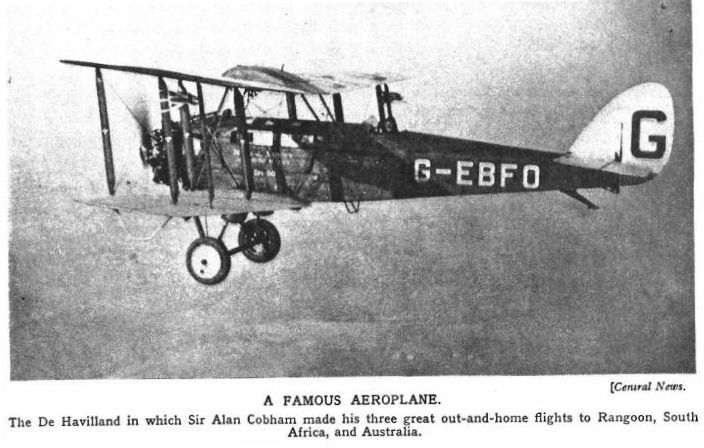 Working for the De Havilland Hire Company in 1921 Cobham set off on a three-week, 5,000-mile air tour of Europe with a rich American passenger called Lucien Sharpe, taking in 17 countries. In 1925 Alan Cobham then flew to the Cape of Good Hope in South Africa and back in the DH.50. The next year in June 1926 the intrepid pilot set off from Rochester to Australia and back to land outside the Palace of Westminster. This epic journey was deemed a success though Cobham was very upset by the loss of his engineer and friend, A.B. Elliott, who had been shot and killed by a ‘wandering Arab’ firing at the plane while it was in flight over Basra. The long flight succeeded in getting a great amount of publicity for the world of aviation, and also for Alan Cobham himself, who was knighted by King George V.

Sir Alan entered several flying contests in his time and another can be discovered by using TheGenealogist’s Reference Books collection. The particular page revealing his fantastic achievements is to be found in The Air Annual of the British Empire 1930 Vol II which lists the competitions won by this intrepid aviator. From the lists we are able to see that as plain Mr A.J. Cobham he won the King’s Cup Race (Handicap) in 1924. The Britannia Challenge was his in the years 1923 and 1925, as well as in 1926, won after he had received his knighthood.

In 1932 Sir Alan began the National Aviation Day displays – a blend of barnstorming and joyriding flights. These events consisted of up to 14 aircraft, ranging from single-seaters to modern airliners, and many skilled pilots touring the country. Publicised as ‘Cobham’s Flying Circus’, it was hugely popular, giving thousands of members of the public their first experience of flying, and bringing ‘air-mindedness’ to the population. A search of YouTube turns up some wonderful black and white film footage from the 1930s of the Air Circus in various venues.

Other records that we can use for researching this British airman include his entry in the 1936 Directory of Directors, the Who’s Who in Sport for 1935 and also the Trade, Residential and Telephone Directories on TheGenealogist. Using the directories we can trace his addresses from Frognal Lane, Hampstead in 1930, to a move to Little Park Hill, Bletchingley, Surrey in 1936 and then to the coast near Bognor Regis in West Sussex when he lived at West Winds, Old Point, Middleton-on-Sea, as we find in the 1940 Telephone Directory on TheGenealogist.

Finally, a passenger list from 1956 when he and Lady Cobham were travelling from Hull to St Thomas in the Virgin Islands, reports his address as being in Bournemouth by that time. Sir Alan Cobham actually retired to live in the British Virgin Islands but when he died, in October 1973, the many newspaper obituaries for this pioneering British aviator noted that he had passed away in Bournemouth, thus showing us that he returned to end his days in this Dorset seaside town. On TheGenealogist we can find his death registered in the death indexes for the nearby district of Poole.

Sir Alan Cobham’s aviation business interests moved from running a small airline towards specialising in inflight refueling. One of his two sons, Michael Cobham, would eventually take over from his father at the helm of this business and while Sir Alan died in 1973, today the company that bears his name, Cobham plc, is still in business and has grown to become a vital link in the most advanced European military and civil aerospace programs.

Exploring a family story is always made much more interesting when a person can be found in some of the supplemental records, as well as the usual census and births marriages and death records. From the 1911 census, all we could tell was that he was the son of a ladies’ underclothing manufacturer. Going deeper into the records, however, has revealed much more about this man. The campaign medals provided us with his various ranks, the two branches of the military in which he had served and the date of his commission as an officer etc. By finding him in the 1936 edition of Who’s Who in British Aviation gave us a timeline to follow from WWI to the 1930s. The Wonder Book of Aircraft 1930 furnished some very interesting information about his endurance flights and some wonderful pictures of his aircraft. Turning to the various directories on TheGenealogist we were able to trace his address as he moved from Hampstead to the South Coast of England. And The Air Annual of the British Empire 1930 Vol II gave us the dates of top competitions he won. 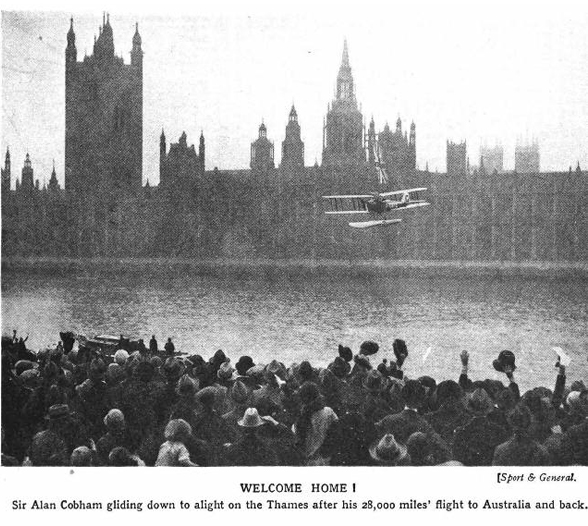 Welcome Home! From The Wonder Book of Aircraft 1930 in the Reference Book Records on TheGenealogist 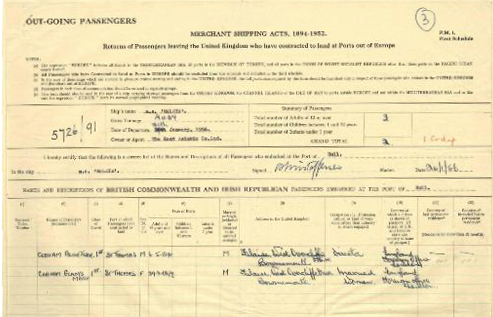 Ships’ Passenger Lists can be searched at TheGenealogist 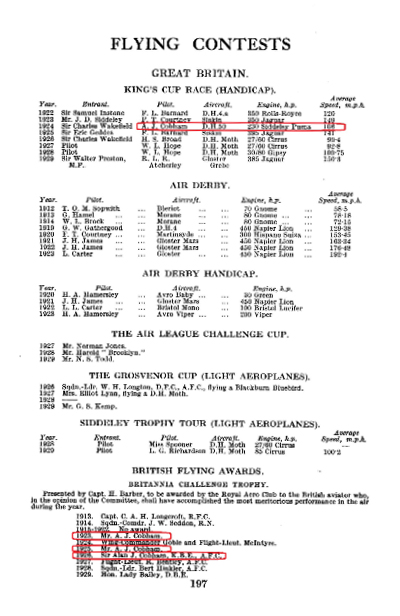 The Air Annual of the British Empire 1930, Vol. II