Those who sadly lost their lives in WWI can be traced in Rolls of Honour and casualty lists.

The definitive records of WW1 casualties are held by the Commonwealth War Graves Commision, which will help you find where a forebear killed in the war is buried. There are also many different Rolls of Honour that have been published during the war or since.

The National Roll of the Great War was published in 14 volumes shortly after the war ended and covers records of more than 110,000 men and women who served in the war - many of whom survived it. It was organised by UK region, but foes not cover the whole country - nonetheless it contains brief biographies of those listed which can be of great value to family historians.

De Ruvigny's Roll of Honour is a much smaller collection - around 25,000 records - but more than a quarter of them include photographs. The level of information varies - it may just be the person's regiment and when and where they dies, but in some cases there are detailed biographies.

There are many other similar lists - many of which, along with those above, are available at TheGenealogist.co.uk, which has now also indexed the War Office's weekly casualty lists and other lists covering the whole 1914-19 period. The site also has WWI death indexes which provide General Register Office references for ordering death certificates.

Many WWI service records have been lost but those that survive, along with medal index cards, are available from the National Archives.

1. Let's say we want to look for the death of someone called Gerald Peacocke whom we know died in 1917. Log in to your account at TheGenealogist.co.uk, and head to www.thegenealogist.co.uk/search/casualty_lists to enter the details.

2. There is one match which looks likely - the results show he was in The Buffs. Clicking the icon at the right brings up a transcription of the casualty lists record - we can also view the original image (an example is below).

3. Now let's look him up in the site's extensive collections of Rolls of Honours, at: www.thegenealogist.co.uk/search/roll_of_honour - there are two results here which straight away give us further information, including his education at Dulwich college.

4. This roll of honour record gives us a wealth of new information, including a mini biography with details of his training, service and the circumstances of his death. 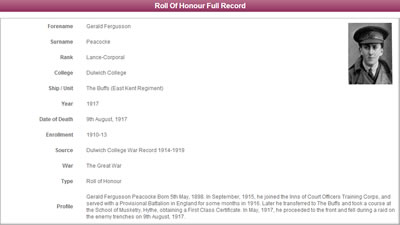 5. Many of the Roll of Honour records at TheGenealogist even include a small photograph of the individual, which might help identify him in an old family album.

6. Clicking on the gravestone icon next to the results connects you straight to the data at the Commonwealth War Grave Commission website - where we now learn where Peacocke was buried. 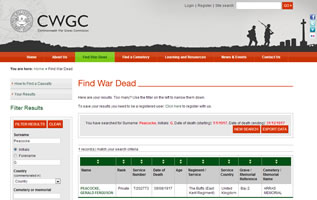