The legibility of the original copies of the 1841 census enumerators books held at the National Archives is poor. The entries were mainly written in pencil on what is now very discoloured paper, so it is no wonder that the filmed images have taxed the reading abilities of family historians ever since they became available.

With several companies making scanned images of the census available on CD, we can now puzzle over census images at our leisure, but the particular problems presented by the faded 1841 census books have proved more difficult to transfer it to CD and retain even the moderate legibility available on the microfilm copies. 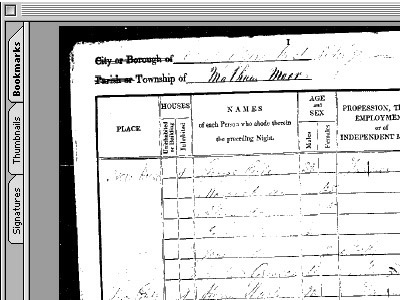 The standard approach to scanning other census years has been to produce the images in Black and White only from diazo microfilms provided by the National Archives. This has proved to produce perfectly acceptable images, however when applied to the 1841 census the results are nowhere near as good. I was extremely disappointed by the first 1841 B&W census CD images I viewed for Yorkshire. Many of the pages I knew to be readable on the local library's filmed version were illegible. on the CD images 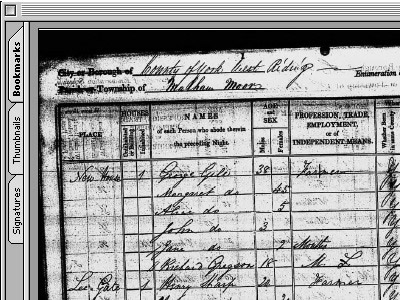 The alternative to using B&W images scanned from diazo films is to take the more expensive silver halide film from the National Archives, which holds greater detail than the diazo films we are used to seeing in record offices, and scan the page images in Greyscale to capture all the available detail.

This is what S&N Genealogy Supplies have done and having tried their new Greyscale scanned images of my local area, I found that once again I was able to discern the writing on these familiar pages. However it may have just been luck that those particular books were better, so I decided to delve a litlle deeper into the Yorkshire images and try to make a more comprehensive comparison.

The problem with greyscale images from the publisher's point of view is that the file sizes are much greater, which is reflected in the number of CDs in the sets, making them more expensive to publish. The poor quality of the pages also means that many of them have to be rescanned at different settings to capture the maximum detail. The greyscale images of the 147 Yorkshire Pieces HO 107 /1210 - 1357 fill a massive 44 CDs, whilst the B&W images covering the same Piece numbers fit on just eight discs. However those larger file sizes should in theory manage to capture every little bit of available detail from the films, optimising their readability.

My overall impression of the new S&N CDs was that the greyscale images were much more readable. This didn't mean that it was all legible though, some pages still had unreadable areas. This is unavoidable given the condition of the originals and the National Archive films. I thought I should be a little more scientific about my comparison, but there was no way I could compare every enumerator's book in all the 147 Pieces for Yorkshire!. My solution was to take an enumerators book at random from every Piece with a number ending in zero, in the hopes of achieving a reasonably representative sample. This sampling method seemed to work as the resultant books contained examples of both the best and poorest examples I had come across.

I then viewed every page in both sets of books and noted whether it was fully readable, sometimes with difficulty, or had any portions that couldn't be made out with any certainty. In some cases this was the entire page, but in the main it was only a portion of a page image. Having gone through both the B&W and Greyscale images I found that the S&N greyscale images offered over 30% more fully readable pages than the B&W images. However this percentage increase in full readable pages doesn't fully reflect the fact that the Greyscale page images, mostly suffered from small areas of poor clarity, whilst on many of the B&W images, the areas were generally much larger.

Unless the National Archives could re-film the census using better technology, we have to accept that the 1841 census is always going to give researchers problems, whether using microfilm or digitised CD images. However I am totally convinced that the greyscale images produce far more readable data than B&W images of the same material. Given the choice between B&W or Greyscale images of the 1841 census, I would certainly choose the latter as in my opinion the greyscale images offer the best of a bad census.

The Yorkshire Census and other census sets are available from GenealogySupplies.com.