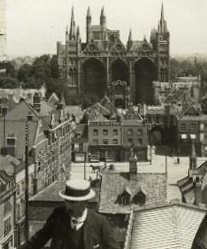 The original name of Peterborough was Medeshamstede. The then town’s name changed to Burgh from the late tenth century, and eventually developed into the form Peterborough (but Gildenburgh was also used in the 12th century).

Present-day Peterborough is the latest in a series of settlements which have at one time or other benefited from its site where the Nene leaves large areas of permanently drained land for the fens.

Hereward the Wake rampaged through the town in 1069 or 1070. The abbey church was rebuilt and greatly enlarged in the 12th century. The Peterborough Chronicle, a version of the Anglo-Saxon one, contains unique information about the history of England after the Norman conquest, written here by monks in the 12th century. The abbey church became one of Henry VIII’s retained, more secular, cathedrals in 1541, when the town also became a city.

When civil war broke out, Peterborough was divided between supporters of King Charles I and the Long Parliament. The city lay on the border of the Eastern Association of counties which sided with Parliament, and the war reached Peterborough in 1643 when soldiers arrived in the city to attack Royalist strongholds at Stamford and Crowland. The Royalist forces were defeated within a few weeks and retreated to Burghley House, where they were captured and sent to Cambridge. While the Parliamentary soldiers were in Peterborough, however, they ransacked the cathedral, destroying the Lady Chapel, chapter house, cloister, high altar and choir stalls, as well as mediaeval decoration and records.

Historically the area delineated as the Soke of Peterborough was associated with Northamptonshire, although had its own independent jurisdiction. The Soke became a separate administrative county under the Local Government Act of 1888, but in 1965 it was merged with Huntingdonshire and from 1974 both became part of Cambridgeshire, although the Soke again became a unitary authority in 1998.

Railway lines began operating locally during the 1840s, but it was the 1850 opening of the Great Northern Railway’s line from London to York that transformed Peterborough from a market town to an industrial centre. Lord Exeter had opposed the railway passing through Stamford, so Peterborough, situated between two main terminals at London and Doncaster, increasingly developed as a regional hub.

Coupled with vast local clay deposits, the railway enabled largescale brick-making and distribution to take place. The area was the UK’s leading producer of bricks for much of the 20th century. Brick-making had been a small seasonal craft since the early 19th century, but during the 1890s successful experiments at Fletton using the harder clays from a lower level had resulted in a much more efficient process.

Designated a New Town in 1967, Peterborough Development Corporation was formed in partnership with the city and county councils to house London’s overspill population in new townships sited around the existing urban area.

Exclusive census analysis from data at TheGenealogist reveals that common surnames in Peterborough in the 19th century included Jackson, Green, Ward, Thompson, Baker and Hill; plus Rose, Wallis, Ball, West, Noble, Davis, Speechley and Leach in 1841 and Allen, Palmer, Chapman, Butler, Bird, Gray and Parker in 1911. The population rose from 6,375 in 1841 to 31,158 in 1911, with railway and brickmaking roles dominating occupations.

Leading data website TheGenealogist.co.uk has a wealth of records for Peterborough as well as its historic county of Northamptonshire and its modern ceremonial one of Cambridgeshire. Here is a quick run-down of what you can find (in addition to national collections):