One career is not enough

In modern times, a job for life is something that belongs to the past. It is fascinating, therefore, to find a man born in 1861 who didn’t stick to just one occupation. Sir Basil Home Thomson’s curriculum vitae was packed with more than the usual number of diverse public service positions. This man’s remarkable work life encompassed a spell in the South Pacific working for the colonial service in the 1880s where he became a magistrate in Fiji. He also worked alongside the Prime Minister of Tonga so that in one record he is actually noted as the Acting Prime Minister of that territory. By 1896 he was a Barrister-at-law, then in 1900 a Prison Governor, going on to be the Assistant Commissioner of the Metropolitan Police and then Director of British Intelligence. This doesn’t even mention his stint as a Justice of the Peace.

Using the Peerage, Gentry & Royalty records on TheGenealogist we can find Sir Basil’s entry in Burke’s Peerage for 1921. This reveals that while in Polynesia he was Acting Native Commissioner in Fiji and that he held the position of Secretary to the Prisons Committee between 1908 and 1913.

His later fall from grace, however, appears incredible. As a legally trained barrister and former policeman, we may wonder how he got himself into the situation that caused his conviction in 1925 for committing an act in violation of public decency with a prostitute in Hyde Park. This ended his amazing public career in this country. His defence was that he had been speaking to the woman while doing some research for a book that he was writing. Already a published author by the 1930s, he had turned to writing successful detective novels.

Basil Home Thomson was born in 1861 as the third son of the Right Rev. William Thomson. From the Clergy List 1852, found on TheGenealogist, we discover that William Thomson had been a Fellow and Tutor at Queen’s College Oxford. In the year of his son’s birth, Sir Basil’s father then became the Bishop of Gloucester and Bristol, as we can find out by using the occupational records on TheGenealogist. Here, in the Crockford’s Clerical Directory, we see that William Thomson was listed as succeeding to the Bishopric of these South Western cities in 1861. It was a short lived appointment as, if we look at the succession of the Archbishops of York, we discover that it was the very next year that Bishop William Thomson was translated to York as is also referred to in a report in The Illustrated London News for November 15th 1862.

Further research on TheGenealogist finds a list of dignitaries of the Church of England in Thom’s British Directory 1873 that shows us Archbishop Thomson at the head of his Archdiocese and revealing details of the size of his flock.

Return of the prodigal son

Basil Thomson’s time abroad ended with him being invalided back to Britain, having contracted Malaria and so bringing to a close that particular period of his working life. It did, however, begin his married life when he wed his long term fiancée in London - the occasion meriting a mention in the press. We can discover his wedding to Grace Indja Webber in the Lewisham district of south east London in 1899, by using the marriage records on TheGenealogist. If we also turn to their Newspapers & Magazines we are able to read a report that the ceremony was at the parish church at St. Margaret’s Lee on November the 1st and was performed by none other than the groom’s father, the Archbishop of York, assisted by the Bishop of Rochester and others.

With his return to England and his marriage, he now embarked on a new career, this time in the service of The Prison Commission. From another search in the records on TheGenealogist we find the Thomson’s in the 1901 census which shows us that 39 year old Basil Thomson is now the Governor of Northampton Prison. His wife is not present but his 9 year old daughter and 6 year old son are recorded along with their Governess. Basil Thomson had begun working in the prisons as a deputy governor of Liverpool and by reading his entry in The Old Public School-Boys Who’s Who, in the Educational records on TheGenealogist, we can see that by 1902 he had become the Governor of Dartmoor - before moving on to be the Governor of Wormwood Scrubs in 1907.

A move in the next year saw him become the secretary to the Prison Commission where he remained for the next five years. As we are able to see from this publication he was a prolific author with published works that stretched back to 1894 with his South-Sea Yarns.

Not content with rising to the heights of the Prison service, his next change of direction was when he was appointed to Scotland Yard in 1913. As Assistant Commissioner of the Metropolitan Police he then took command of the Criminal Investigation Department (CID) of the police. With the outbreak of the First World War the British Intelligence departments had to call upon Thomson’s CID to carry out the actual arrests of suspect spies and their questioning. With the Intelligence services having no power of arrest, Thomson, as head of CID, became involved in the arrests of several high-profile suspects in espionage cases including Lt Carl Hans Lody, the only German Spy to go on public trial in either of the World Wars. Lody would be convicted and then executed at the Tower of London by firing squad. In 1916 Thomson interrogated Mata Hari, the Dutch exotic dancer. He released her only for the French to arrest her one year later and execute her as a spy.

While still the Assistant Commissioner of the Metropolitan Police, Thomson also took on the role of the head of all the British Intelligence departments when in 1919 he became the Director of Intelligence. Two years on, in 1921, he left this role having fallen out with Lloyd George and resigning for reasons that remain obscure to this day. Searching within the 1921 residential records on TheGenealogist, a resource that makes a great census substitute, we can see that in the year that he was ousted from his position he appeared in the Post Office London Street Directory at the (old) New Scotland Yard on the Victoria Embankment - a building which is next door to the current headquarters of the Metropolitan Police.

Searching further within this resource we can also find that his home address at this time was at 81 Victoria Road in Kensington.

From our research in TheGenealogist’s passenger lists, one year later we find the 61 year old travelling on his own from Southampton to New York. His occupation is now recorded as ‘none’; yet in the years after his departure from the police and intelligence services he had turned his hand to the successful writing of detective novels.

The 1926 Kelly’s Post Office Directory with County Suburbs also has a list of Justices of the Peace that includes Sir Basil Home Thomson. Ironically in December of the previous year, and probably too late to amend the copy before publication, Sir Basil had been caught by a Metropolitan Police Constable allegedly “committing an act in violation of public decency" with a prostitute, Miss Thelma de Lava, in Hyde Park. Sir Basil’s explanation was that he was simply engaged in a conversation with the woman in the process of research for a book that he was writing on vice in London. He was, however, found guilty of public indecency and fined £5.

This interesting character can be easily traced through the broad number of records on TheGenealogist including the newly released census substitute for 1921 that you may use to find your ancestors in this era. 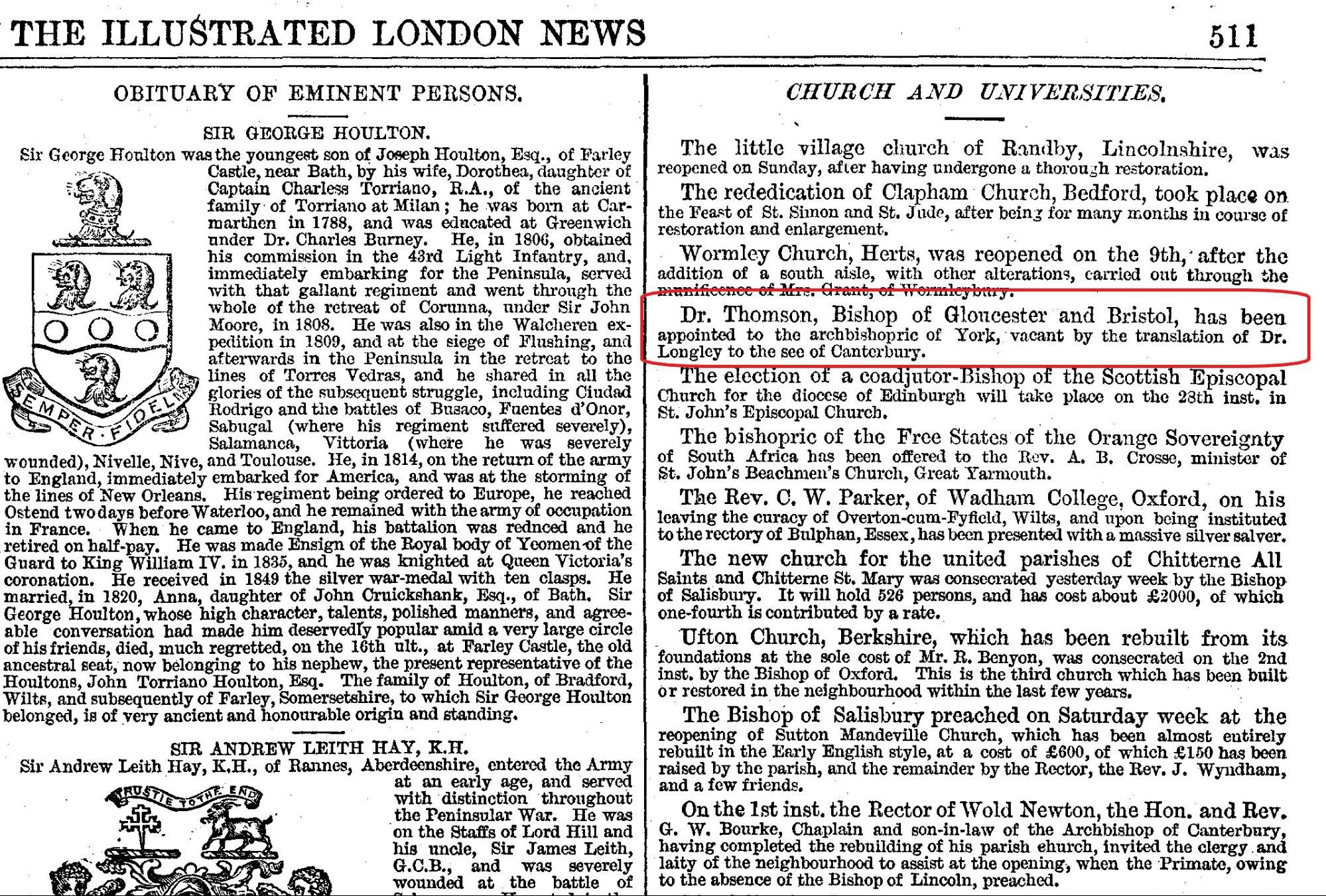 Mention of Dr Thomson in The Illustrated London News 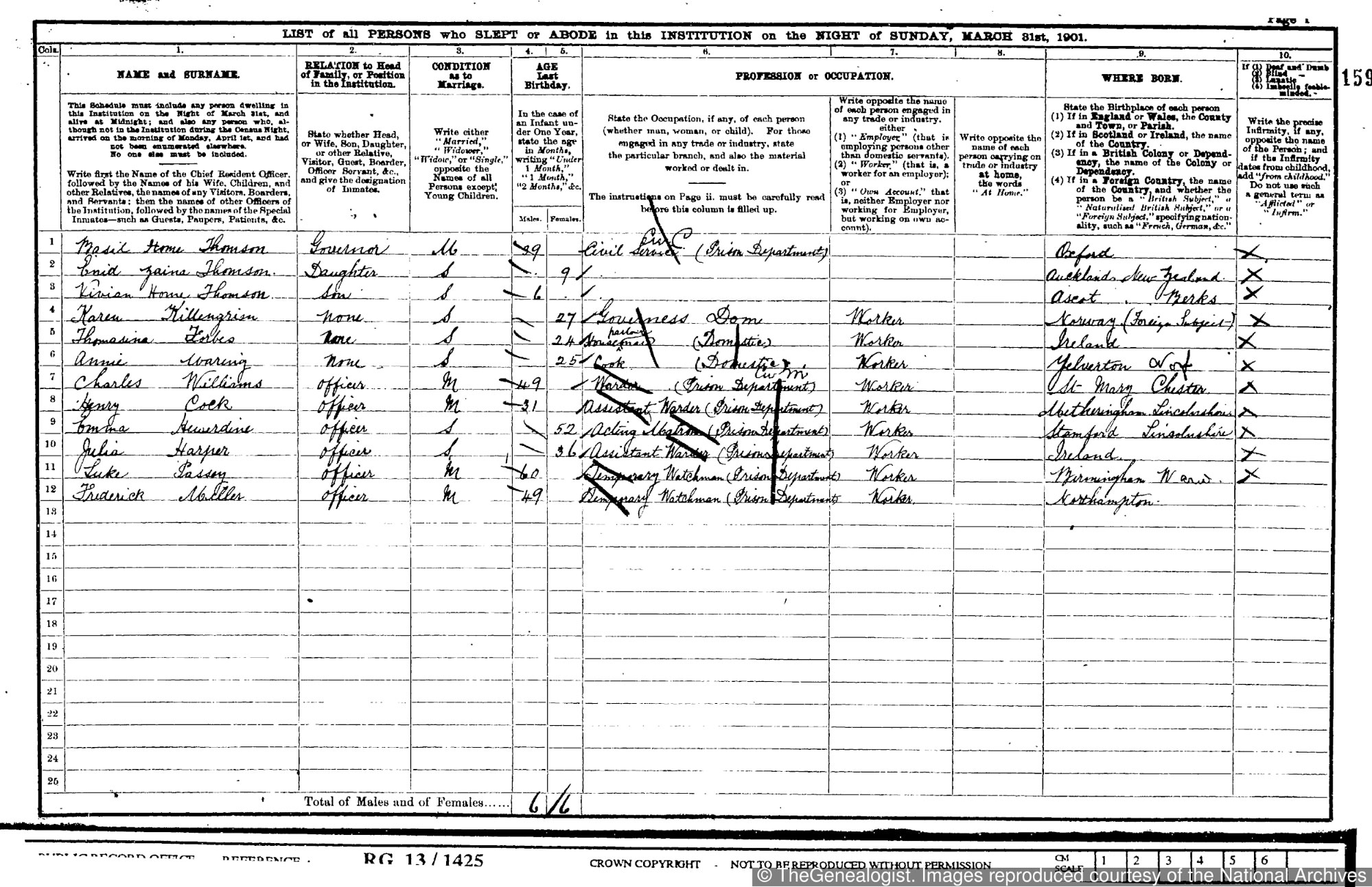 The 1901 census recorded Basil Thomson as Governor of HMP Northampton 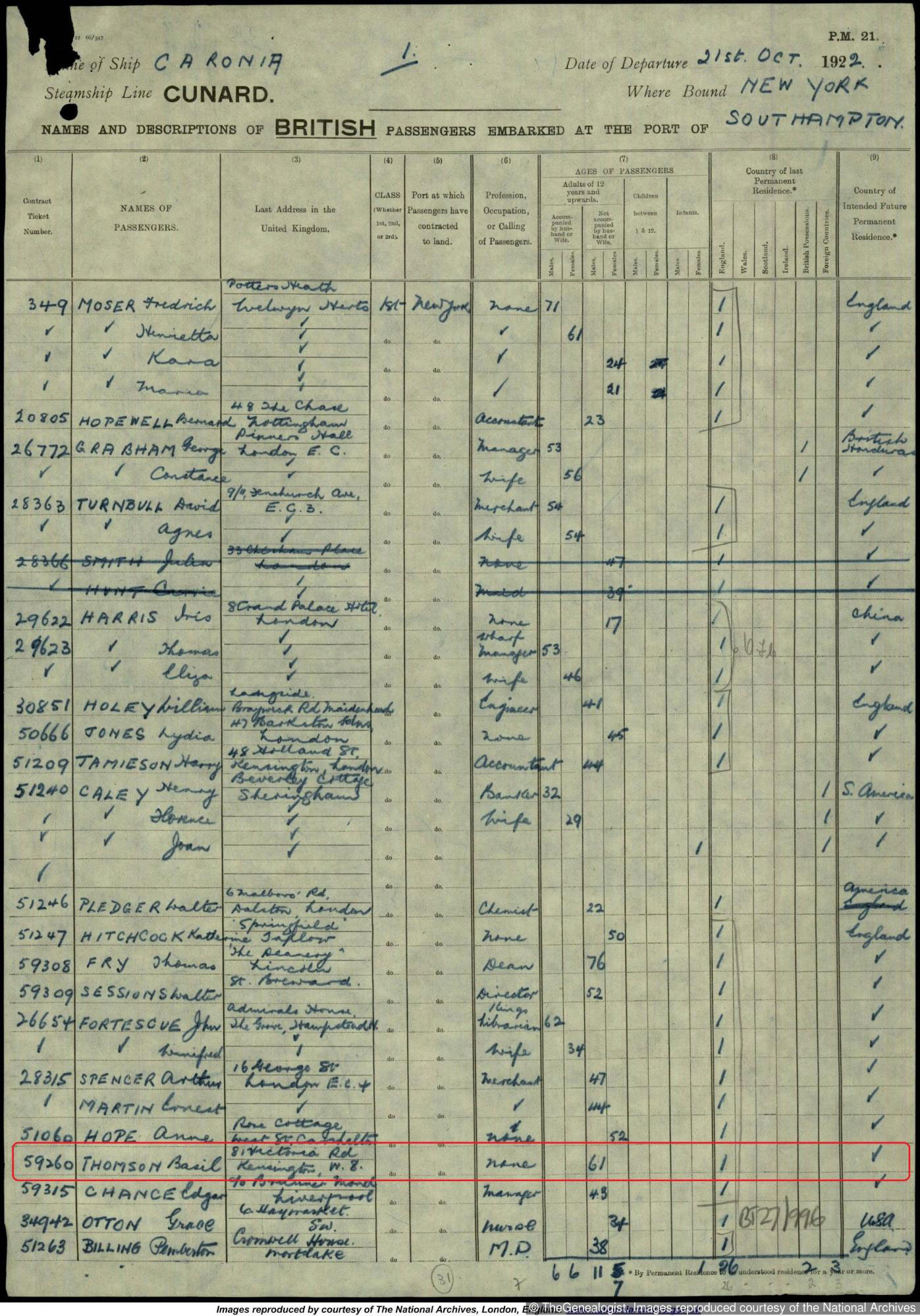 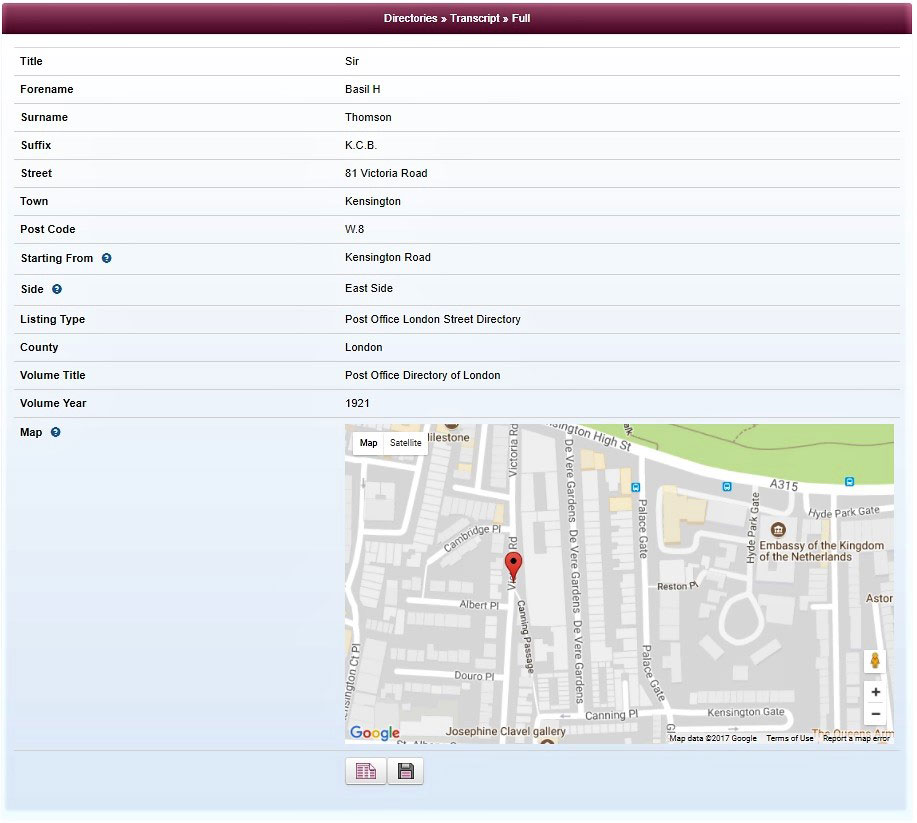 in 1921, Basil's home address was given as being Victoria Road in Kensington