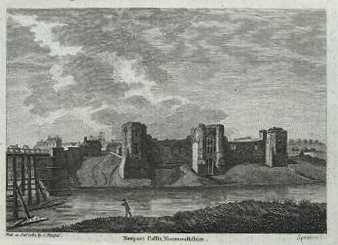 According to legend, in the late 5th century Saint Woolos church was founded by Saint Gwynllyw. The church was certainly in existence by the 9th century and today has become Newport Cathedral, the seat of the Bishop of Monmouth. The Normans arrived from around 1088– 1093 to build the first Newport Castle and river crossing downstream from Caerleon. The name (first used in 1126) was derived from the original Latin name Novus Burgus, meaning new borough or new town. The city can sometimes be found labelled as Newport-on-Usk on old maps.

Around the settlement, the new town grew to become Newport, obtaining its first charter in 1314. In the 14th century friars came to Newport where they built an isolation hospital for infectious diseases.

During the Welsh Revolt in 1402, Rhys Gethin, general for Owain Glyndŵr, forcibly took Newport Castle. During the raid, the town of Newport was badly burned and Saint Woolos church destroyed.

By the 16th century, trade was thriving with the nearby ports of Bristol and Bridgwater and industries included leather tanning, soap making and starch making. The town’s craftsmen included bakers, butchers, brewers, carpenters and blacksmiths. A further charter was granted by James I in 1623.

During the English Civil War in 1648, Oliver Cromwell’s troops camped overnight on Christchurch Hill overlooking the town before their attack on the castle the next day.

As the Industrial Revolution took off in Britain in the 19th century, the South Wales valleys became key suppliers of coal from the South Wales Coalfield, as well as iron. These were transported down local rivers and the new canals to ports such as Newport, and Newport Docks grew rapidly as a result. Newport became one of the largest towns in Wales and the focus for the new industrial eastern valleys of South Wales. By 1830 Newport was Wales’s leading coal port, and until the 1850s it was larger than Cardiff.

The Newport Rising in 1839 was the last large-scale armed rebellion against authority in mainland Britain, in which John Frost and 3,000 other Chartists marched on the Westgate Hotel. Newport probably had a Welsh speaking majority until the 1830s, but with a large influx of migrants from England and Ireland over the following decades, the town and the rest of Monmouthshire came to be seen as ‘un-Welsh’, a view compounded by ambiguity about the status of Monmouthshire.

The late 19th and early 20th century period was a boom time for Newport. The Alexandra Docks opened in 1875. The population was expanding rapidly and the town became a county borough in 1891. In 1892 the Alexandra South Dock was opened and was the largest masonry dock in the world.

Compared to many Welsh towns, Newport’s economy had a broad base, with foundries, engineering works, a cattle market and shops that served much of Monmouthshire. However, the docks were in decline even before the Great Depression, and local unemployment peaked at 34.7% in 1930.

The post-war years saw renewed prosperity, with Saint Woolos Cathedral (now Newport Cathedral) attaining full cathedral status in 1949, the opening of the Llanwern steelworks in 1962, and the construction of the Severn Bridge and local sections of the M4 motorway in the late 1960s.

Exclusive census analysis from data at TheGenealogist reveals that common surnames in Hereford in the 19th century included Taylor and Harris. In 1841, other common names here included Watkins, Phillips and Davis; plus Smith, Brown, White and Powell in 1911.

Leading data website theGenealogist.co.uk has a wealth of records for Newport and its county of Monmouthshire. Here is a quick run-down of what you can find (in addition to national collections):