Lost in the war, found in the records

World War One affected every level of society. Our case study shows the wide variety of records that reveal what happened to one renowned casualty. 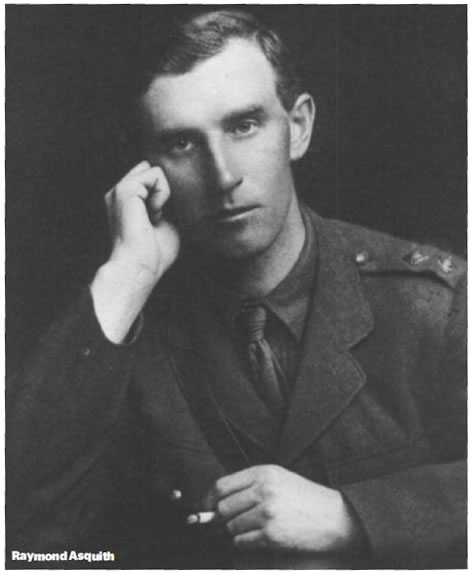 Many of us have ancestors who fought and died for King and country in World War One and would like to know more about their story. There are a number of useful resources that can be easily searched online to help you discover more about them.

Family historians can learn more about their ancestors who fought, and also those who may have perished, from a range of military records that includes war memorials, rolls of honour, medals, casualty lists and newspapers and magazines – all of these are available online at www.TheGenealogist.co.uk; you can also find pictures of the places ancestors may have known using the Image Archive.

For even the most casually observant person, there are many war memorials to be seen throughout Britain in memory of those who fell in the Great War. In towns, cities, villages, institutions and places of work, various plaques, statues and other edifices still exist to this day in commemoration of those who were killed. TheGenealogist has a growing number of War Memorial Lists and books of Rolls of Honour, all of which can be easily searched to find our forebears.

Every level of society, even right up to the head of the British Government of the time, was touched by the conflict, with loved ones being wounded or killed.

At the beginning of World War One, the Prime Minister was the Liberal MP for East Fife, Herbert Henry Asquith; like many others in the country, he was to lose a son in the fighting that followed.

On 15 September 1916, Raymond Asquith, who was in civilian life a Barrister-at-Law who has studied at Oxford University and the PM’s eldest son, was killed of wounds received at the Battle of the Somme. At this point he was a Second Lieutenant in the Grenadier Guards. Raymond can be found on several war memorials connected with his prewar life and so we can easily find him in several data sets at TheGenealogist using its Master Search. 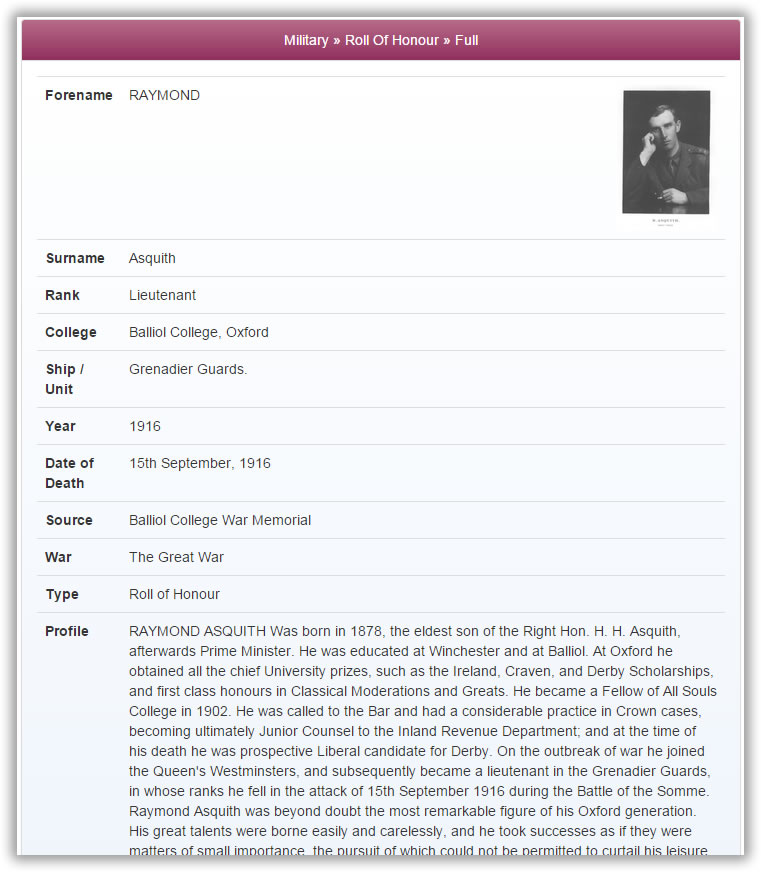 One click returns the record of the Balliol College War Memorial, the Oxford college where Raymond Asquith had once been an undergraduate. The transcription gives us a large amount of information about him. We discover that Raymond Asquith became a Fellow of All Souls College in 1902, that his lawyer’s practice was substantially one of prosecuting for the Crown and that he became a Junior Counsel for the Inland Revenue. At the time of his death Raymond Asquith was also the prospective Liberal candidate for Derby. As with many of the Roll of Honour records, along with the record we get a profile picture of Raymond.

As a Barrister, Asquith also appears on a Roll of Honour for the dead members of the Inner Temple in London, a society for lawyers with the right of audience in the English courts. To be called to the bar, and practice as a barrister in England and Wales, an individual must belong to one of the four Inns of Court. Asquith was a member of the Honourable Society of the Inner Temple and as such he is listed in a Roll of Honour book that was produced for this association listing members who had fallen in the conflict. This volume has now been digitised by TheGenealogist and can be easily searched by name or a keyword such as regiment. Another result connected to this Inn of Court, found by TheGenealogist's Master Search, is for Asquith's listing on the War Memorial inside the London Temple Church. This plaque lists those members of both the Middle and Inner Temple who had given their lives in the 1914-1918 war. 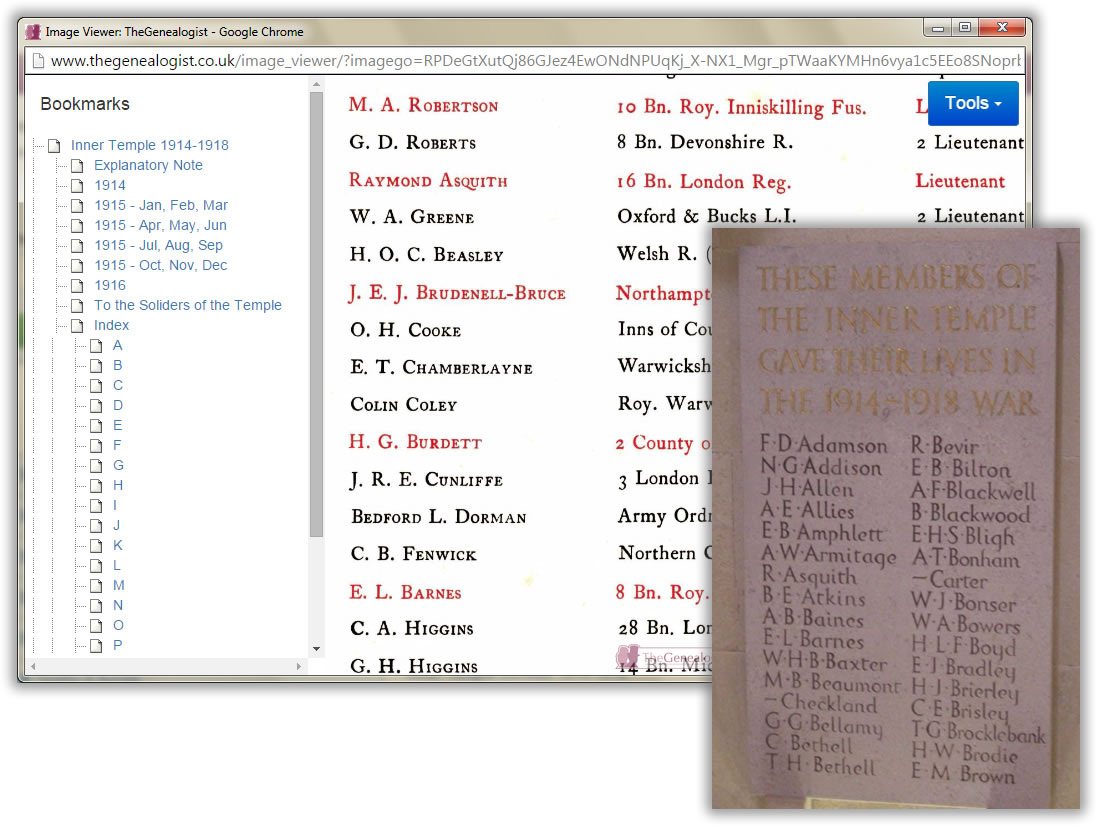 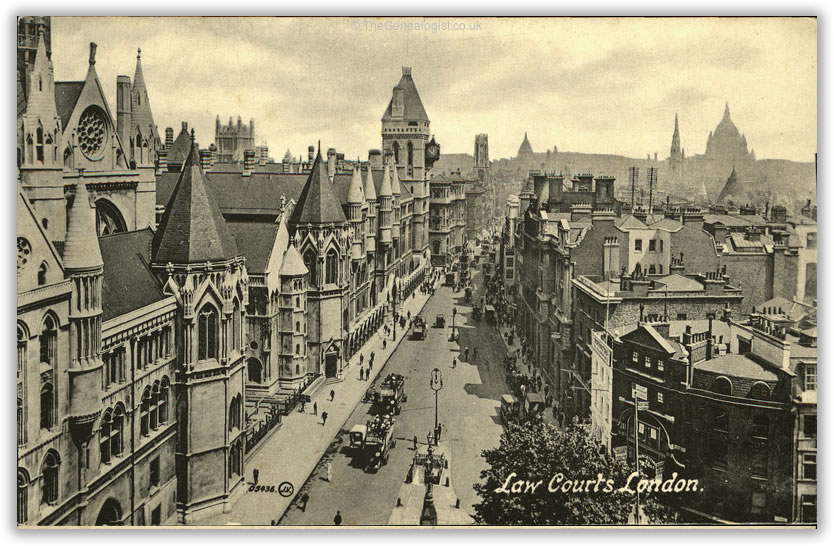 As a legal counsel who appeared for the crown, he would have been familiar with the building associated with the administration of justice in the capital. On the Image Archive we can look for pictures of the Law Courts in the Strand, not far from the Fleet Street entrance to the Inner and Middle Temple that Asquith would have known well.

Family Historians are always looking to add more substance to the story of their ancestor's life than just names and dates and it is often helpful to take a look for pictures of people, streets, vistas, churches and other buildings and to see the past through the eyes of our antecedents. To do this for Raymond Asquith, we can turn to the Image Archive collection on TheGenealogist and see various images of the Temple Church in London, including the location of the war memorial we have just found above. The photographs will give us a feel for a building that he would have known in his lifetime. 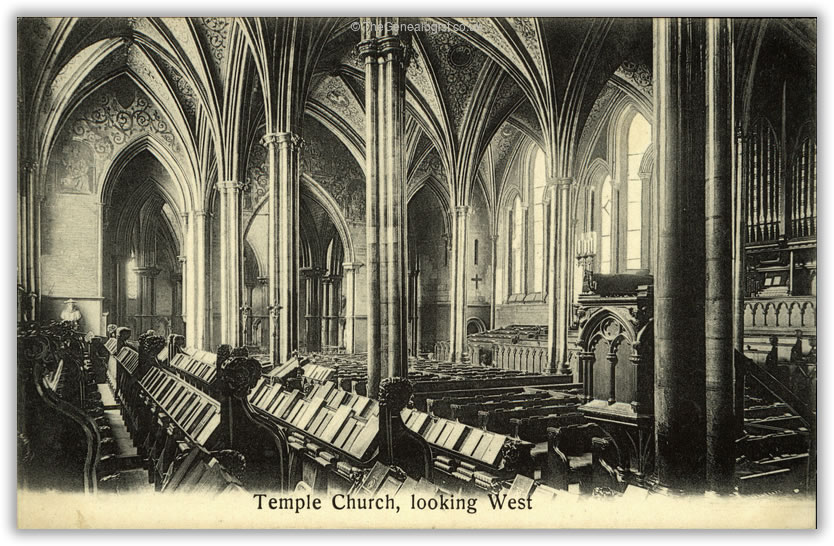 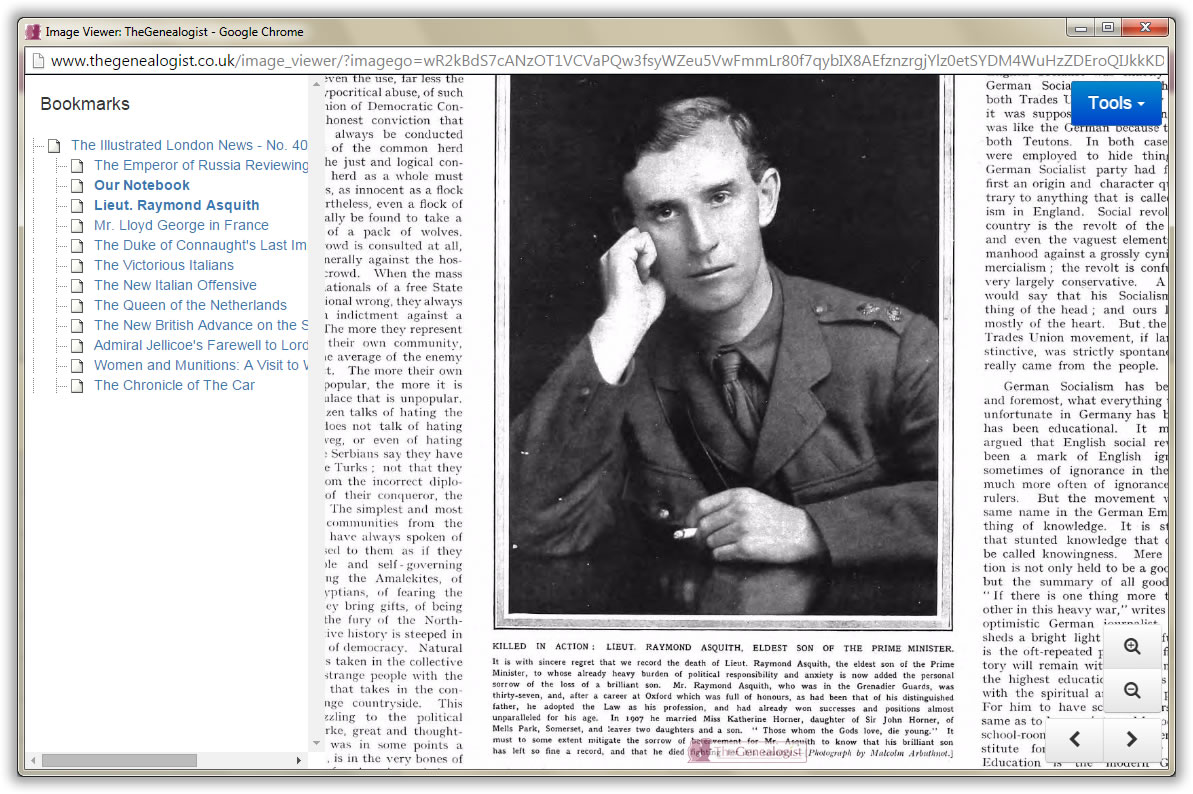 Records that can also help you find pictures and articles that can include your ancestors is the growing Newspaper & Magazine collection online at TheGenealogist. We know that Raymond Asquith died from wounds received on the battlefield and a search within the Newspaper & Magazine collection returns a report on his death, plus a portrait and photograph of the man. This article confirms some of the facts that we knew about the Second Lieutenant, but also give us other personal details. We learn that the name of his wife was Katherine Horner and that she was the daughter of Sir John Horner of Mells Park, Somerset. We can also see that he left two daughters and a son.

Raymond Asquith can also be found within the Medal records, where he qualified for the 1915 Star. A second record shows that he had been mentioned in dispatches. A link from the transcript to the London Gazette would enable us to find the announcement in the official record. 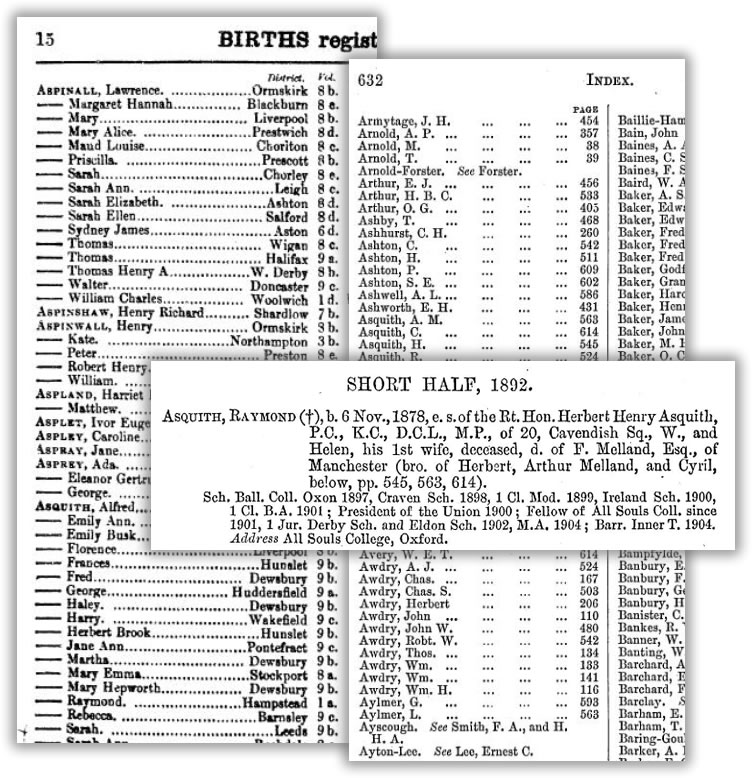 From a search of the birth, marriage and death records on TheGenealogist, we can see that Raymond Asquith was born in 1878 in Hampstead, Middlesex. It is possible to look at his previous education within the school records, and we find him mentioned in the Winchester College Register. With all the diverse records that we have also accessed in this research, along with the standard Census and BMDs, we can see just how powerful the resources of TheGenealogist are. It can help us find out more about our ancestors and build a picture of them that is somewhat more than just names and dates in a family tree.