Practical Family History was published by ABM Publishing. It has now ceased publication. 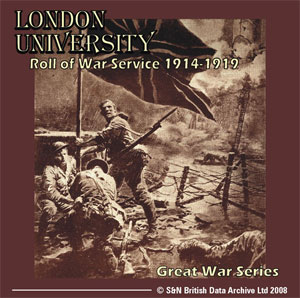 The London University Roll of War Service 1914-1919 is a record of all the officers, former officers and cadets who served or died in the Great War associated with the University of London Officers' Training Corps.

The list of the fallen contains short biographical details, which may include name, education, parents, the battle they were killed in and the date and manner of death. There is also a list of those who served and another of those who were mentioned in despatches or who received other honours or distinctions.

There are photographs of five former cadets awarded the Victoria Cross and a description of the circumstances it was awarded for. A chronicle of key events from the establishment of the corps in 1908 to the provision of a war memorial is included.

The CD is fully searchable, bookmarked and printable.