Listen to Family Stories... and Then do the Research 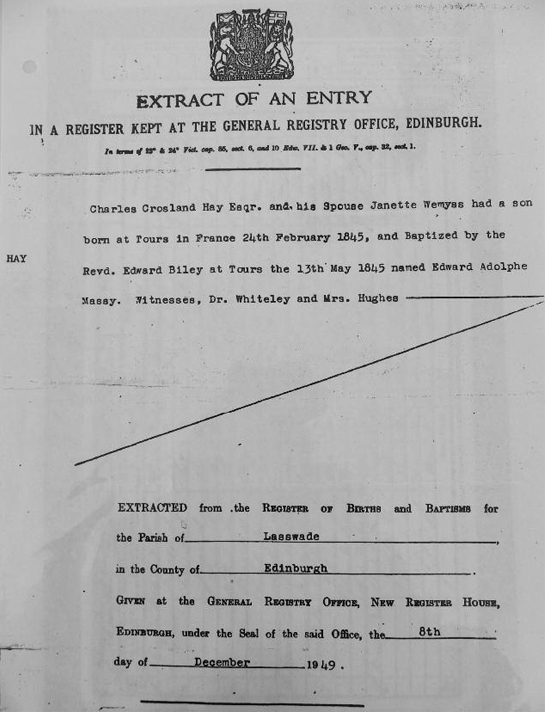 Edward Hay in 1851 census of Cheltenham on TheGenealogist

…and also provides a Bing satellite map of Grafton Road 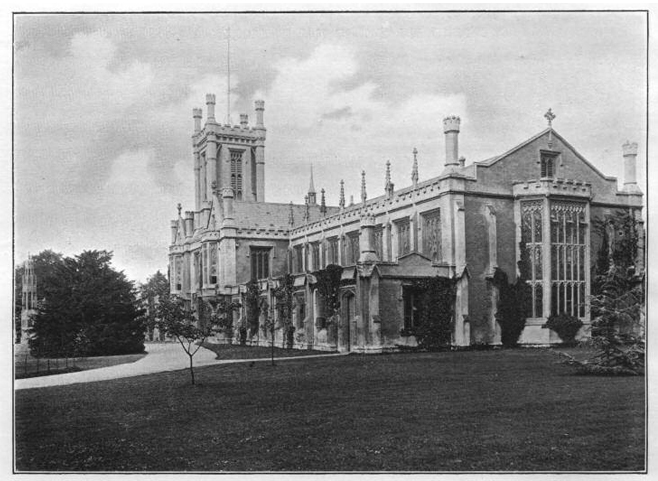 We are always encouraged to listen to family stories from the senior members of our family; but then to always try to corroborate what they tell us by looking for the records to back up the tales we have heard.

When I began looking into my maternal family tree I recalled being told firmly, by my grandmother, that her father was Scots and so Scotland is where I thought I should begin looking for him. My grandmother lost her father when she was a teenager, probably before she had reached the age where she would have been interested in her family heritage. As it turns out, while her father may have claimed Scottish descent from two Scots parents, that was not where he was born and nor was it where he grew up!

A chat with an elderly relative allowed me to glean that my great-grandfather, Edward Hay, had been born in France in 1845. So was he French, I had asked? My great-aunt’s daughter replied with a very firm ‘No, he was Scots!’ To back this up she could actually show me a photocopy of a GRO(S) certificate. This showed that his baptism was in Tours, France but then it had been recorded in the family’s home parish register back in Lasswade, Scotland. So now I had the connection to Scotland – but this was not where I would find him as a boy.

After a fruitless search in many records from north of the border I turned to TheGenealogist and the census records for England and Wales. It was here that I finally discovered my great-grandfather aged six… in Gloucestershire.

I was able to pick up his trail with the 1851 census on TheGenealogist, living at an address in Cheltenham. In that year he was recorded as a scholar in his parents’ home, Brandon House, Leckhampton. I was immediately able to see that this was a prosperous household with a butler, four female servants and a governess, all of which came as a bit of a surprise. None of the family tales had ever spoken about our connection to this genteel spa town, nor was anything said about our family having lived in a big house with servants.

Is it still there today?

Locating where an ancestor had lived using the census is the first step. Then, for me, comes the desire to find out more about the town or area in which they lived. As in this case, the road is not always named on the census return for a particular property and so you may need to scan through the returns either side to see the address for other houses around it. Another trick is to find the census enumerator’s route; it will be at the beginning of the returns for that batch. I had discovered that Brandon House stood on Grafton Road and so I wanted to know if it was still there today.

If you are in this situation a useful resource to turn to is the Map Explorer on TheGenealogist. If you are looking for where your ancestors once lived this map tool is invaluable as it has several layers of georeferenced historical and modern maps. This means that even when a road has been renamed, extinguished, or built over in a redevelopment of the area, you can still see where it was that your forebears had once lived.

Selecting the historical map to begin my search, I entered Grafton Road into Map Explorer and worked out, by using the controls to fade the modern map in, that the road still exists today. With this information I was able to pay a physical visit to the area and by following the apparent route of the census I was then able to walk the street until I found the impressive Georgian building that was Brandon House.

Returning to the Map Explorer I was intrigued to see that, in the time that my great-great-grandparents were resident there, it had a large garden to the side of the main building and stretching down Painswick Road. My recollection, from the brief visit I had paid to the site, was that today this road was built up with houses in what had once been the garden. By switching the modern map on Map Explorer to the Bing satellite map I could confirm this.

The 1851 census had shown me that the head of the household was Edward’s father, Charles Crosland Hay. And so now I was introduced to one of my great-grandfathers courtesy of TheGenealogist’s census records.

Once I had located the family in the 1851 census I had methodically turned to look at the next census ten years later, but with no luck. I began to wonder if the parents had died in the intervening years and the children had gone their own way. The death of Edward’s mother was confirmed when I discovered her listed in the civil registration death index records for 1851 in Cheltenham on TheGenealogist and I noted that it was not long after the census had been taken. Immediately I wondered if she had been ill at the time. The way to find out would be to order a copy of her death certificate from the General Register Office using the details found in the death index. When the certificate arrived it told me that it was cancer that had sadly claimed her life at the age of just 43. Charles, Edward’s father, was to follow his wife seven years later in 1858 and when my great-grandfather was still only 13. Sadly my grandmother would lose her own father, Edward, when she was 15.

Finding the deaths of his parents didn’t explain, however, where my great-grandfather, Edward, was at the time of the 1861 census when he would have been 16 years old. My research now turned to finding some alternative records to try and discover the mystery. On TheGenealogist there is a useful collection of Educational Records, taken from school and university registers with dates ranging from 1220 to 1949. Selecting Gloucestershire and entering my great-grandfather’s name, I was rewarded with a return for Edward Adolphe Massey Hay in the Cheltenham College Register, with an address in Lansdown Terrace in the town. This now gave me the place to where his widower father and the children had moved after the death of my great-great-grandmother. It also revealed that Edward had left the school in June 1860 before the next census.

Intriguingly, he is listed as a day boy, which suggests that after his father’s death in 1858 he had friends or relatives in the town with whom to stay until he finished his schooling two years later.

I went on to also discover some of his elder brothers were listed in an earlier register of the same school. It indicated to me that an army career was the preference for this particular family, with John Crosland Hay making it to be a decorated major-general, while the others resigned their commissions after a few years’ service.

In situations where the census returns a blank, turning to residential and trade directories is another practical substitute for the official population count. Using the Trade Directories collection on TheGenealogist, I was able to find Edward in the 1869 Kelly’s Post Office Directory for London, in business as a merchant. The entry indicated searching within their pages for Stevens, Hay & Co and this supplied an address at 65 Fenchurch Street in the City.

Using residential directories can be a useful census substitute and so I was intrigued when I found an entry for Edward M Hay and Mrs Webster at 50 Princes Square, Bayswater in the Court Directory section of the Kelly’s Post Office Directory, 1880. I wondered if Mrs Webster could have been a relative, specifically his sister, as I was sure that in 1880 it would not have been usual for a married lady and a gentleman to advertise that they lived in the same house, unless they were siblings.

With the benefit of the list provided by the 1851 Cheltenham census of all of my great-grandfather’s brothers and sisters, I was aware that Edward was the youngest of them all. His next eldest sister, Mary Anne who had been born three years prior to Edward, appeared to me to be a possibility and so I turned to the marriage records, available on TheGenealogist, to see if I could find out who she married. I easily established from these that in 1862 Mary Anne Hay did indeed marry Edmund Forster Webster in Upton on Severn, Worcestershire.

Strangely enough, a search for her husband takes us right back to the Cheltenham College register where we find that he had been a school contemporary of Mary Anne and Edward’s illustrious brother, John Crosland Hay. It reveals Mr Webster’s appointments in the Madras civil service from his attendance at the East Indian College at Haileybury in 1855 to his retirement in 1887, having served in various positions as a judge and officiating chief secretary to the government there.

These findings, in the records on TheGenealogist, took me in a different direction from that which the family story had pointed. I discovered that it had been Cheltenham that my great-grandfather had called home as a boy, but that he had lost his parents there before he had grown into an adult. The records answered some of the questions and opened up further lines to be researched. It also reinforced the fact that if an ancestor disappears from the census collection that the solution can be to approach the problem by thinking laterally and check to see if you can find them in a census substitute. On TheGenealogist I was able to use a number of street directories and educational records such as the old school and university registers. I share the records and resources that I used here as they may be useful for readers to fill in a little of the missing details of their own family’s story. 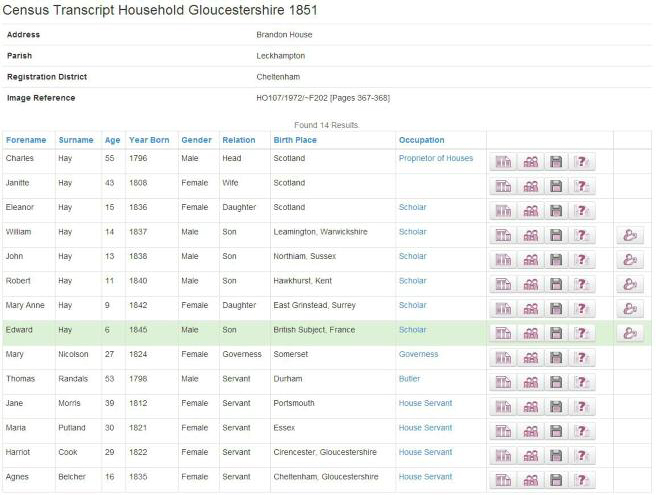 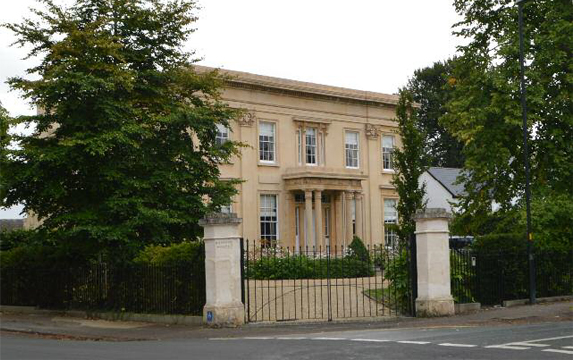 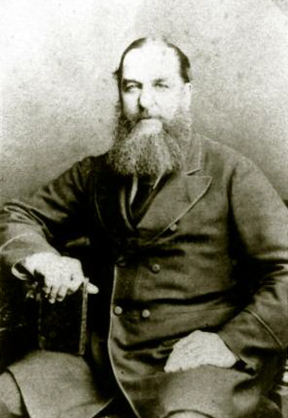 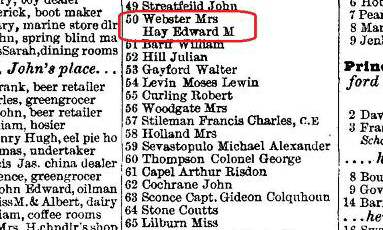