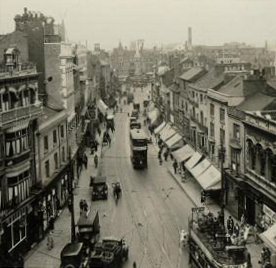 Leicester’s history dates back to an Iron Age settlement clustered along the east bank of the Soar above its confluence with the Trent. It became a Roman town, and remains of baths can still be seen today. Following the Saxon invasion of Britain, Leicester was occupied by the Middle Angles and subsequently administered by the kingdom of Mercia. It was elevated to a bishopric. In the 9th century, Leicester was captured by Danish Vikings. Leicester did not become a bishopric again until the Church of St Martin became Leicester Cathedral in 1927.

Following the Norman conquest, Leicester was recorded in the Domesday Book as Ledecestre, and noted as a city, but lost this status in the 11th century and did not become a legal city again until 1919.

When Simon de Montfort became Lord of Leicester in 1231, he made repeated attempts to expel the Jewish population from the town.

John of Gaunt died at Leicester Castle in 1399. At the end of the War of the Roses, King Richard III was buried in Leicester’s Greyfriars Church, a Franciscan friary which was demolished after its dissolution in 1538. Richard’s remains were famously found and identified with the help of DNA research in 2012 and in 2015 he was reburied in Leicester Cathedral. In 1530 Cardinal Wolsey died and was buried at Leicester Abbey, now Abbey Park.

The Corporation of Leicester opposed the efforts of Charles I to disafforest the nearby Leicester Forest, and anti-enclosure riots followed. During the Civil War Leicester was unsurprisingly therefore a Parliamentarian stronghold. In 1645, Charles I decided to attack the town to draw the New Model Army away from the Royalist headquarters at Oxford. The town was recovered by Parliament on 18 June.

The construction of the Grand Union Canal in the 1790s linked Leicester to London and Birmingham. In 1832, the railway arrived in Leicester in the form of The Leicester and Swannington Railway, which provided a supply of coal to the town from nearby collieries. The Midland Counties Railway (running from Derby to Rugby) linked the town to the national network by 1840. A direct link to London St Pancras Station was established by the Midland Railway in the 1860s.

These developments encouraged and accompanied a process of industrialisation which intensified throughout the reign of Queen Victoria. Factories began to appear, particularly along the canal and river, and districts such as Frog Island and Woodgate were the locations of numerous large mills. Hosiery, textiles and footwear became the major industrial employers: manufacturers such as N. Corah & Sons and the Cooperative Boot and Shoe Company were opening some of the largest manufacturing premises in Europe. There were serious Chartist riots in the town in 1842 and again six years later.

Leicester became a county borough in 1889, although it was abolished with the rest in 1974 as part of the Local Government Act. The city regained its unitary status apart from Leicestershire in 1997.

Exclusive census analysis from data at TheGenealogist reveals that common surnames in Leicester in the 19th century that stand out against the country in general included Ward, Cooper, Clarke, Hill, Green, Moore, Allen and Cox plus Jackson, Palmer and King in 1841 and Harris in 1911. The population rose from 48,000 million in 1841 to 229,000 in 1911, with textile (including framework knitting in 1841) and shoemaking work dominating occupations.

Leading data website TheGenealogist.co.uk has a wealth of records for Leicester and its county of Leicestershire. Here is a quick run-down of what you can find (in addition to national collections):