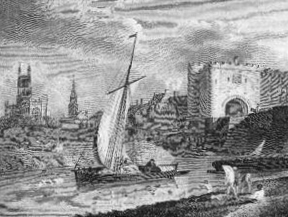 The Romans began settling Gloucester in the first century AD on account of it being next to the lowest point where the River Severn could be crossed. The city prospered, even after the Fall of Rome, although we know little of its subsequent life (under the Celts) until the Saxon Chronicles report of its capture in 577.

Gloucester’s central cross-shaped street plan is owed to the Saxon Aethelflaed, daughter of Alfred the Great. In this era the city already had a castle and a mint, and saw pilgrims coming to visit the shrine of St Oswald – the remains of St Oswald’s Priory can still be seen today.

These remains, along with those of Blackfriars and Greyfriars, among others (such as the Norman St Mary de Crypt), are testament to the city’s status in medieval times. Gloucester was significantly located between the rich wool lands of the Cotswolds and a route to the sea; its main exports became wool, leather and iron, as well as salt from Worcestershire. There was also a thriving fishing industry. The cargo-carrying Severn trow was designed with a flat bottom to cope with shallow tidal waters, and a removable mast to enable passing under bridges. In 1581, Elizabeth I granted the city port status, which removed the need to pay duties to Bristol.

For a week every June, the city would celebrate with the week-long Fair of St John. At Christmas, until the 12th century, ‘all the lords, bishops and great men of the kingdom’ were obliged to stand in front of the king at Gloucester, marking the city’s importance as the gateway to Wales.

Gloucester was to play a key role in the English Civil War, during which it was a stronghold of Parliamentarianism. On 10 August 1643, Charles I himself led an army of 35,000 to lay siege to the city. Inside the walls, the plucky Colonel Edward Massey led 1500 soldiers and ordinary citizens in a spirited defence, firing home-made grenades at the Royalists. They were down to their last three barrels of gunpowder when the Earl of Essex arrived with 15,000 men to relieve them, and the Royalists were forced to withdraw.

The height of the boom at Gloucester Docks was in the 1860s, aided by the opening of the 16-mile Gloucester and Sharpness Canal (once the broadest and deepest in the world) in 1827, although in 1874 a new dock at Sharpness itself took some of this trade away. Gloucester marked a key interface between the sea to the south and the Midlands, making it possible to transfer cargoes from ships to narrowboats. The docks had a new lease of life during WW2, handling vital cargo such as petrol, metal and food safely far away from London.

Even as early as 1852, the canal was also plied by pleasure boats, which are the main users of these waterways today. Less well known than its neighbour Cheltenham, perhaps, in the early 19th century Gloucester also became a popular spa town. The pump room was finally demolished in 1960.

Another trade Gloucester was notable for is pin-making. This trade – which can be explored in detail in Gloucester Life Museum – began to flourish in the 16th century, and a century later was the city’s main industry. By the start of the 19th century, more than a fifth of the city’s people worked across its nine pin factories. The trade was eventually killed off by rivals in Bristol and Birmingham.

As early as 1811, the city had a horse-drawn tramroad connecting the docks to Cheltenham. Gloucester Central station opened in 1840, at the end of the Birmingham and Gloucester Railway, and eventually the area was served by a confusion of four railway companies and five stations.

Leading data website TheGenealogist.co.uk has a wealth of records for Gloucester and its county. Here is a quick run-down of what you can find (in addition to national collections):