Founder of the Bobbies

Nick Thorne traces residential records for the man who served twice as Prime Minister of the United Kingdom, was founder of the Bobbies, a country landowner, a tenant in London, and inventor of the Tamworth pig – Sir Robert Peel. 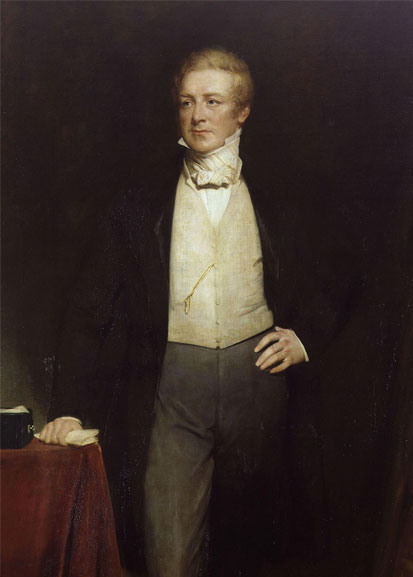 When researching ancestors, who may have moved about the country, there are a number of record collections that we can use to help us locate them. These range from census, directories and land records such as the tithes. The nineteenth century statesman credited with creating the modern police force, Sir Robert Peel, was born in the Lancashire town of Bury in 1788. He is, however, strongly associated with Tamworth in Staffordshire. It was here that he inherited an estate and, following in his father’s footsteps, became its MP for twenty years. As the owner of Drayton Manor he was well known in farming circles for breeding the first Tamworth pig by crossing pigs local to the area with pigs from Ireland and producing the hardy red animal.

As a result of his father’s influence and political connections, Robert Peel had originally become a Member of Parliament when he was only 21 in 1809 representing the Irish rotten borough of Cashel, Tipperary. There were only 24 electors in the constituency and they voted him into the House of Commons in Westminster unopposed. He then represented Chippenham in Wiltshire for a time before becoming an MP for Oxford University in 1817. Finally, in 1830, he took the Tamworth seat that had been his father’s before him and then held it until his own death in 1850.

During his time in parliament Peel had become the British Prime Minister on two occasions, the first term was from 1834 to 1835, and the second from 1841 to 1846. In his career Sir Robert Peel held a number of government posts (in both England and Ireland) before he became the Home Secretary in 1822. It was in 1829 that he set up the Metropolitan Police Force based at Scotland Yard where 1000 police constables were employed. They became known as ‘Bobbies’ or ‘Peelers’ after him. It was not just law and order that he was responsible for as in 1844 Peel introduced the Factory Act, limiting the number of hours that women and children were permitted to work in factories and he is often referred to as the founder of modern conservatism.

Confusingly, Peel’s father was also named Sir Robert Peel. Sir Robert senior was a very wealthy textile manufacturer who had become a Member of Parliament and had been one of the early textile manufacturers of the industrial revolution in Lancashire. In 1790 he moved to Staffordshire, having been elected as the Member of Parliament for Tamworth. With his wealth he had bought the borough, along with Lord Bath's estate in the area, and he had then made Drayton Manor in Staffordshire his principal residence taking up the lifestyle of a country gentleman. In 1800 he was created Sir Robert Peel, Baronet of Drayton Manor in the County of Stafford and of Bury in the County Palatine of Lancaster.

Using the wills collection on TheGenealogist we can find the 1st Baronet’s will dated 27th July 1820 in the Prerogative Court of Canterbury Wills. The will has a date of probate of the 8th June 1830 and a single click affords us an image of the document. In 1837, with the younger Sir Robert Peel serving in the opposition Tory party, the Whig government put in practice a law to reform the payments of tithes. The massive land survey of the majority of England and Wales that was required to implement this law, captures the owners and occupiers of land in the mid-nineteenth century ranging from those small plots used as houses and gardens to large country estates.

In Staffordshire, Sir Robert Peel’s huge holdings of the estate of Drayton Manor near Tamworth, can be found in the 1837 tithe records on TheGenealogist.

This website, in an association with The National Archives, has put online the only national coverage of these unique land records. Currently TheGenealogist is also adding colour tithe maps to its already published greyscale maps. Searching across the country allows us to also find Sir Robert in his leased London house in Princess Gate to the south of Kensington Turnpike Road in Middlesex. Here he is recorded as the occupier, while his landlord is the Earl of Listowell whose town property, Kingston House, can be seen on the tithe map nearby.

The tithe survey took some time to complete. The records cover a period between 1837 and the mid 1850s and so can be a useful complementary tool to the census collections beginning with the 1841 count. Searching for Sir Robert Peel and family we can see that by 1841, from the census, that they had now moved on to Spring Gardens in Westminster near to the Mall. Unfortunately Sir Robert died in 1850 after a fall from his horse and so he is not recorded in the next census.

Other records on TheGenealogist that can be used to find residences including the Poll and Electoral Rolls. Searching for Sir Robert we discover that he had voting rights at a property in Margate in Kent. His place of residence was, however, listed as being in Staffordshire and at that time he was the MP for Tamworth. From the printed poll list we can see that he doesn’t seem to have used his vote for any of the three candidates. As this was before the time of secret ballots, we can tell that he didn't vote by looking at the three columns on the right of the page headed with the initials of the candidates. Peel owned property in St John Margate, in fact part of the area was called Peel Town after him.

By piecing together clues from a wide variety of the records on TheGenealogist we have traced Sir Robert Peel's life, and you can use these records too to research your ancestors. 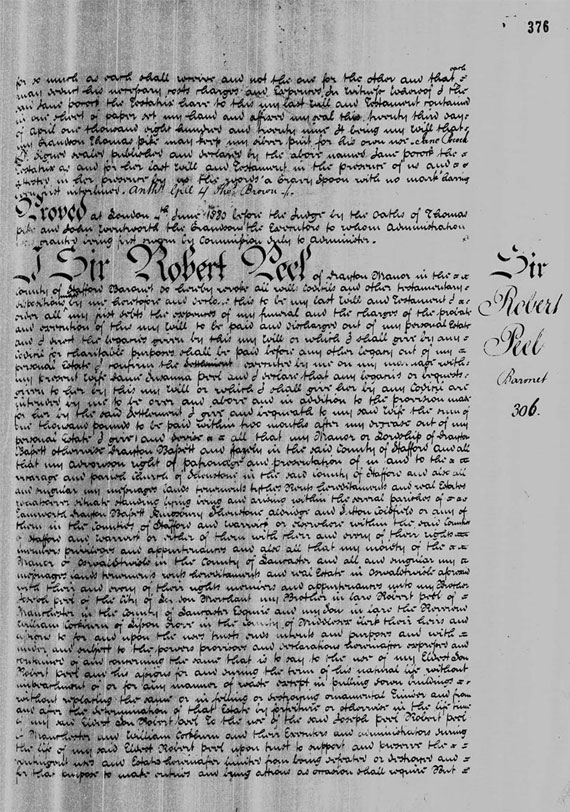 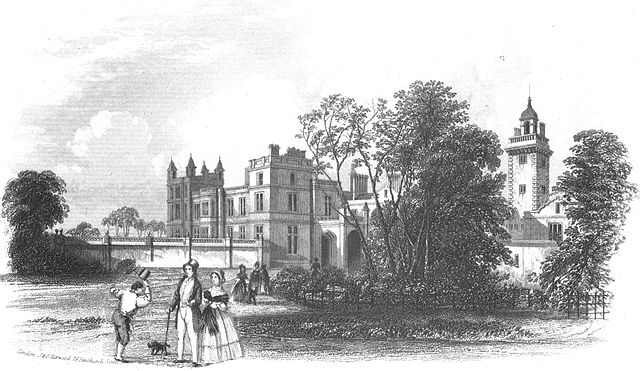 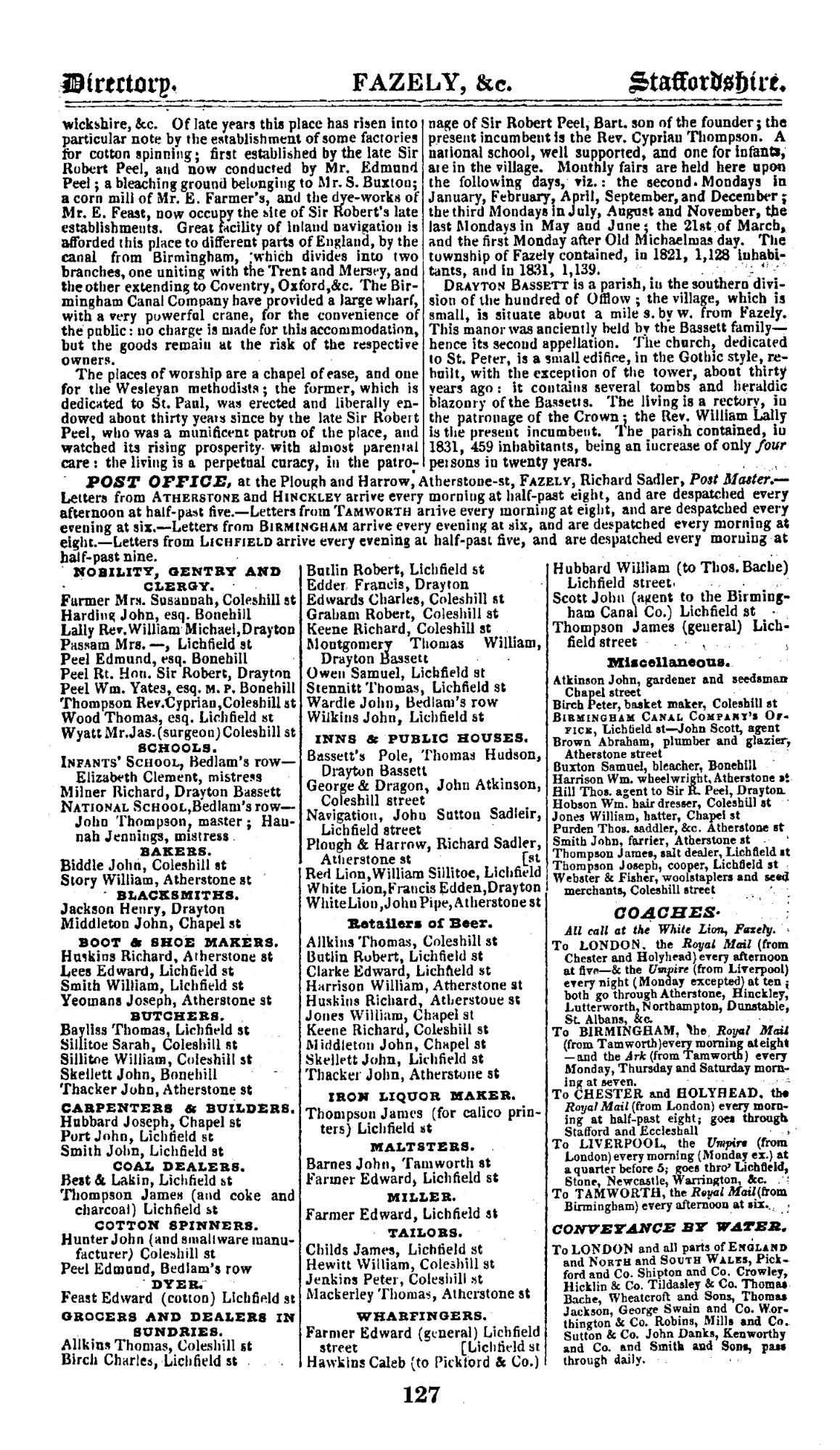