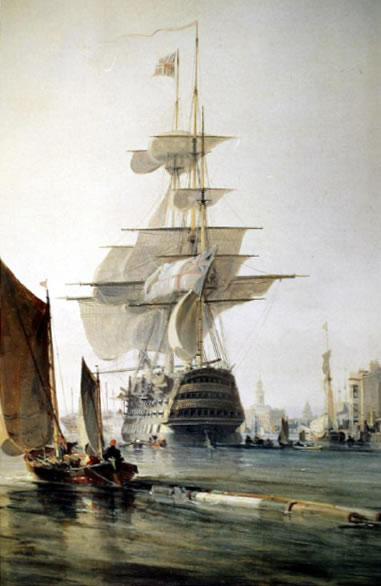 If you have ancestors who set sail with the Navy or merchant fleets in the 19th century, a new resource could help you follow their career...

The 19th century saw a major transformation for Britain's navy and shipping industries alike. After the Napoleonic wars, the 'Pax Britannica' saw Britain reign supreme as the leading global maritime power. Although there were no major sea battles between 1827 (the Battle of Navarino in the Greek War of Independence) and World War One, the Navy itself underwent a sea-change from wood and sail to steam and steel.

Powered by the Industrial Revolution, the merchant navy likewise was tranformed by technology, and saw worldwide dominance in line with the strength of the British Empire. In the 1830s, regular steamship voyages began across the Atlantic, aiding trade and of course taking many of our ancestors between the old world and the new. The lucrative trade in sugar, tea and spices provided much of the economic power behind Britain's supremacy.

Thus many of us will have forebears who took to the sea during the 19th and early 20th centuries, whether in the Royal Navy or in merchant ships, let alone the ongoing fishing industry.

Although merchant seamen were obliged to be registered from 1835, central registration petered out in 1857 and was only reinstated in 1914. It can therefore be complicated to trace the maritime career path of ancestors in this period.

Now fast-growing data website TheGenealogist.co.uk has launched an important new resource for those with seafaring ancestors. It gives details of more than 439,000 Royal Navy and merchant seamen's records, which are searchable by name, rank, age and ship. The full crew list can be displayed for any of the ships.

Covering the years 1851-1911, these include lists and agreements for those involved in merchant shipping and ships' crews for those at home ports, at sea and abroad. 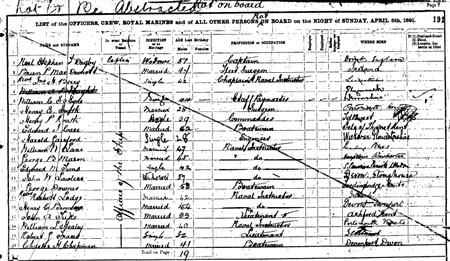 An original image of HMS Britannia's crew from the 1891 census

One example available at TheGenealogist's new crew lists collection is the large crew of the training vessel HMS Britannia, which was docked in Dartmouth. She used to be the magnificent HMS Prince of Wales with 121 guns and was one of six first-rate three-decker line of battleships. Launched in 1860 she was renamed HMS Britannia in 1869 and was then used for cadet training.

Searching for Captain Noel Digby in the advanced search brings up his details out of all the records and allows his full record to be displayed. The Britannia's full crew list can also be shown along with the original image of the record.

Digby was born in 1839 – his crew record shows his birthplace as Dorset – and he enrolled with the Navy in November 1852, ultimately reaching the rank of Vice Admiral. His service record is available online at The National Archives website. Details given may include age, place of birth, rank and ticket number, previous and current ships with ports of registration, dates and places of joining and leaving, and reason for leaving.

The records are from a variety of sources which include The National Archives series BT 98 and specialist county and non-county census records such as those to be found in series RG 9 and RG 10.

The BT 98 lists and agreements are intended to find many of those involved in merchant shipping who cannot be located on the 1851 census because they simply were not at home to be enumerated. Some were at ports in the British Isles many miles from home and some were not even in the country.

The later census-related records include lists for naval personnel on board merchant and Royal Navy vessels, around the UK and abroad.

As an example from BT 98, searching for David Benzie shows us the two ships he was master of during 1851 – the Brothers of Aberdeen and the Prospect of Aberdeen – and then by clicking on the full details icon the site reveals his information, including his ticket number, when he joined and left, and his previous vessel (Betsy of Aberdeen). A third record for Benzie, this time from RG 9, shows him as master of the Sophia in Sunderland. In this case a scan of the original census image is also available.

This one example shows the power of this data set – although many crew records can already be found in census collections, it is hard to make the connections for the same individual over time. Here we have found a sizeable chunk of one man's seagoing career in a matter of seconds.

The full crew list for each ship can be also viewed by clicking on the ship icon next to the search results. An advanced search is also available where you can use the ship's name.

The new record set can be found under TheGenealogist's occupational records collection – these records are available for those with a Diamond subscription.

Other linked records of interest include the large collection of Navy Lists under military rolls and lists at the site – see page 17 of this issue for more information on those. 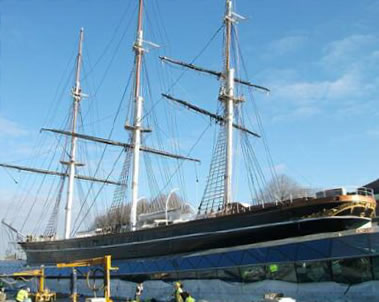 The Cutty Sark, a tea clipper, remains an iconic symbol of Britain's merchant navy supremacy in the 19th century. Her first captain, George Moodie, can be found in TheGenealogist's new records, showing his first job as an apprentice on board the Lovely Maria of Kirkcaldy in 1851.