The second Englishman to play Bond on screen, Daniel Craig has the blood of adventurers and debonair gentlemen running through his veins – some of them from France. Laura Berry explains... 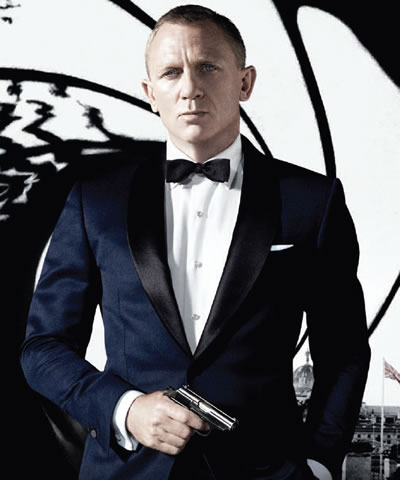 In the new Bond film, Spectre, out in November this year, a cryptic message from the secret agent's past sends him on the trail of a sinister organisation. No ghoulies have been discovered in Daniel Craig's family tree, but his descent from a fascinating line of men who served for crown and country may explain why he has settled into 007's shoes with such ease.

Craig's father was an officer with the Merchant Navy in the 1960's and it is through the paternal side that his lineage goes back to great-grandfather Howard Edward Jones (an Admiralty clerk born in 1884 to Royal Marines Sergeant John Edward Jones) and his wife Rosa Zieman Smith.

Daniel Wroughton Craig, as the actor was christened, inherited his middle name from great-great-grandmother Grace Matilda Wroughton, Rosa Smith's mother. Grace's life was marred by tragedy from an early age. Born on 17 August 1845 in Madras, she was the only daughter of John Chardin Wroughton of the Honourable East India Company. Sadly, her mother, Georgiana Grace Chamier, died in Coimbatore, southern India, just two years later at the age of 30, leaving John with seven young children to bring up, John remarried and moved to Paris where he died in 1854, leaving Grace an orphan at the tender age of nine.

Grace Matilda travelled to Brighton to live with her aunt after her stepmother died in 1859, and appears under her middle name on the 1861 census for Sussex, where she received an education during her teenage years. Her father's will had specifically stated that Grace's inheritance would not be released until she attained 21 years, or sooner if she were marry young, so she returned to India and married LT Charles Mayvore Smith at Black Town Church, Madras in 1865 at the age of 19.

Overseas adventurers were second nature to Daniel Craig's ancestors. Successive generations are named in the Indian Army and Civil Service Lists and earlier East India Registers and Directories at www.TheGenealogist.co.uk. The actor's 3-x-great-grandfather John Chardin Wroughton had enlisted in 1815 aged just 15. In "a spontaneous act of favour", his father's friend nominated John as a student at the East India College. John's father, George Wroughton of Ardwick Hall in Yorkshire and Newington House in Oxfordshire, formerly worked as an attorney to the Honourable Company in its Bengal Establishment and later became Commandant of the Wakefield Regiment of local militia. Though he was a wealthy gentleman, George had 12 children to take care of and John, being one of the youngest sons, was sent off to make his own way in the world.

Georgiana Grace Chamier was John's second wife, the daughter of Henry Chamier, Chief Secretary to the government to the Government of Fort St George in Madras: his son served with distinction during the Indian rebellion of 1857-58. An interesting collection of prerogative Court of Canterbury wills found at TheGenealogist.co.uk reveals that the Chamiers were of French decent. In fact, Henry's father is credited with having kept alive one of the most significant surnames in French Huguenot history when he abided by his maternal uncle's will and reverted to his mother's maiden name Chamier.

Henry's father was born John Ezechiel Des Champs, the son of the Rev Jean Des Champs and Judith Chamier, who were Daniel Craig's 6-x-great-grandparents. The Rev Des Champs was chaplain to Frederick the Great of Prussia and tutor to the younger brothers of that monarch, according to his son's will. However, after Jean Des Champ's death, his childless brother-in-law Anthony Chamier requested that John Ezechiel adopt the surname Chamier to keep alive the memory of their famous Huguenot ancestor, Daniel Chamier, who helped draft the Edict of Nantes in 1598.

Bloody religious fighting ripped France apart in the late 16th century, culminating in atrocities including the St Bartholomew's Day massacre in Paris in 1572, triggering mob violence across the country that saw thousands of French Calvinist Protestants perish. The Calvinists, known as Huguenots, formed a relatively powerful minority in Catholic France.

Despite the troubles of the past, Huguenot Minister Daniel Chamier (c1564-1621) was party to successful negotiations that convinced Henry IV of France to permit Huguenots the right to worship freely. The signing of the Edict of Nantes granted full civil liberties to Huguenots and offered compromises to appease the Catholics.

Several decades of peace ensued, but subsequent monarchs were not quite so liberal. Daniel Chamier himself was mortally wounded in 1621 when Louis XIII's troops besieged the Protestant walled-town of Montauban where the pasture was resident as a professor. In 1865 the Edict of Nantes was revoked by Louis XIV, resulting in hundreds of thousands of Huguenots emigrating to countries where they could practice their religion in peace, including Chamier's descendants.

The Dictionary of National Biography, digitised by and searchable at TheGenealogist.co.uk, explains that Anthony Chamier (and therefore his sister Judith also) was the grandchild of another Daniel Chamier (1660-1698), the first Chamier émigré to arrive in England, in 1691. According to Anthony's biographical entry, "after the revocation of the Edict of Nantes, Daniel sought refuge in England, and officiated in several French Protestant churches in London". Indeed, the Nonconformist registers available to search at TheGenealogist include original copies of Judith's baptism at the French Protestant Chapel 'Les Grecs' on crown street, Soho on 2 February 1720/21. 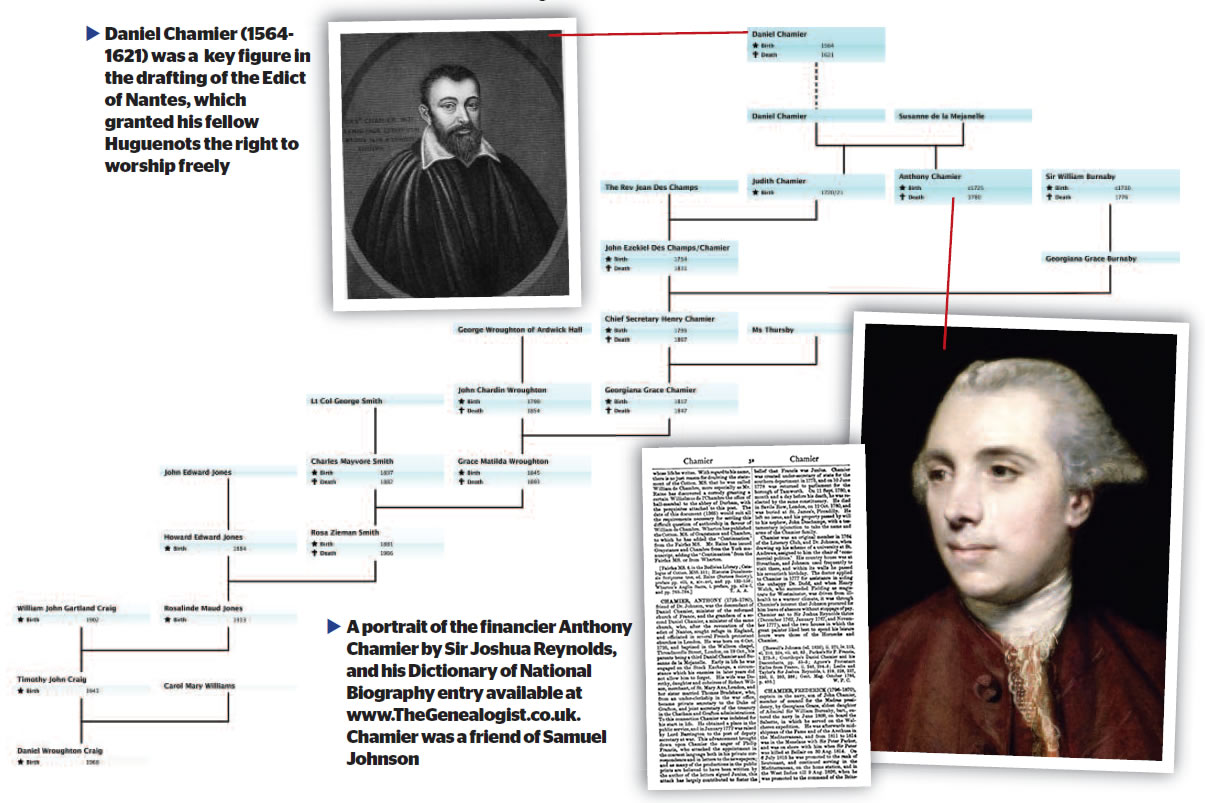 Another hero appears in Daniel Craig's family tree in the 18th century. John Ezechiel Des Champs/Chamier married the daughter of Vice-Admiral Sir William Burnaby (c1710-1776), who was Craig's 6-x-great-grandfather. The Dictionary of National Biography recites a colourful contemporary anecdote describing Burnaby when he first came entered the Navy under Admiral Vernon's command: "Burnaby had the reputation of being a dandy…As was customary Burnaby made a formal visit to the commander-in-chief to report his arrival. He boarded the flagship clad in silk much ornamented with gold lace. After some delay he was admitted to Vernon's presence and the Admiral solemnly apologised for keeping him waiting, his reason for doing so being that he had thought Burnaby was a dancing master."

Appearances were clearly deceptive since Burnaby proved himself to be worthy, in true James Bond style. During a cruise off Puerto Rico in 1743 it was reported that he had captured two privateer sloops, destroyed another two and burnt a sloop in Aguada Bay. He was quickly promoted through the ranks, knighted in 1754 and elevated to the peerage in 1767.

So there are plenty of reasons for the latest 007 star to be proud of his roots. Being of solid military stock and descended from a strong cast of characters whose lives were tested by adversity and touched by tragedy, there are more than a few qualities shared by Daniel Craig's ancestors and the secret agent he portrays. 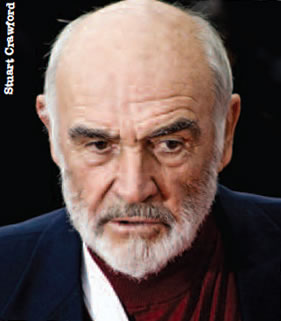 Sean Connery came from humble Scottish stock, though the surname is believed to originate form Ireland. Connery was born in 1930 in Edinburgh to rubber worker Joseph Connery and laundry worker Euphemia McBain McLean. Both his father and paternal grandmother were born illegitimately. In contrast to English civil registration records, however, Scottish birth certificates provide the name of an illegitimate child's father, so we know that Jospeh Connery, born 1902 in Glasgow, was the offspring of Thomas Connery, a pedlar, and Jeanie Mcnab, a machine operator. Rather ominously, Thomas was described as an 'inmate' on the certificate, and the word 'illegitimate' was emblazoned across the column for the child's name. Thomas and Jeanie did eventually marry at St Patrick's Roman Catholic Church in Edinburgh, but not until 1938, ten years after their son Joseph's marriage and when both parents were in their fifties. 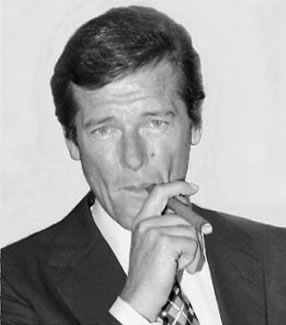 The first Englishman to play Bond, Roger George Moore starred in seven films between 1973 and 1985. Born on 14 October 1927 in Stockwell, he was the only child of London policeman George Alfred Moore and housewife Lily Pope. Paralleling Daniel Craig's family tree, Moore's mother Lily was born 1905 in Calcutta, British India, the daughter of Sergeant William George Pope of the King's Own Regiment. His wife Hannah was living with their three children at the Regimental Barracks in Jersey by the time of the 1911 census, but William was widowed when Lily was just 16. Sadly, Roger Moore's father George also lost a parent at exactly the sane age. The tragic tale is recalled in his autobiography, revealing that his grandmother Jane committed suicide. Her son George believed an affair between father and the woman he subsequently married was to blame. Unhappy, George left the family home at 19 and joined the police force.