Over 117,000 Military Medals were awarded in World War 1 for "acts of gallantry and devotion to duty under fire". These records are now available to view online complete with an image of the actual Medal Card and a link to the official Government publication.
It's a unique, comprehensive set of records available only on www.thegenealogist.co.uk.

The Military Medal was awarded to both non-commissioned officers and other ranks, and was given to soldiers for exceptional courage in battle. It was also awarded to those who risked their lives trying to save others, often in extreme danger. The Medal Records on TheGenealogist show people from a wide range of backgrounds and social classes, including a number of young women from very privileged families who drove ambulances and rescued the wounded in the mud of battle. Being a 'stretcher bearer' was one of the most dangerous jobs of the time and surprisingly, the records show that many women bridged social constraints of the time to risk life and limb to help rescue and bring in soldiers wounded in battle. 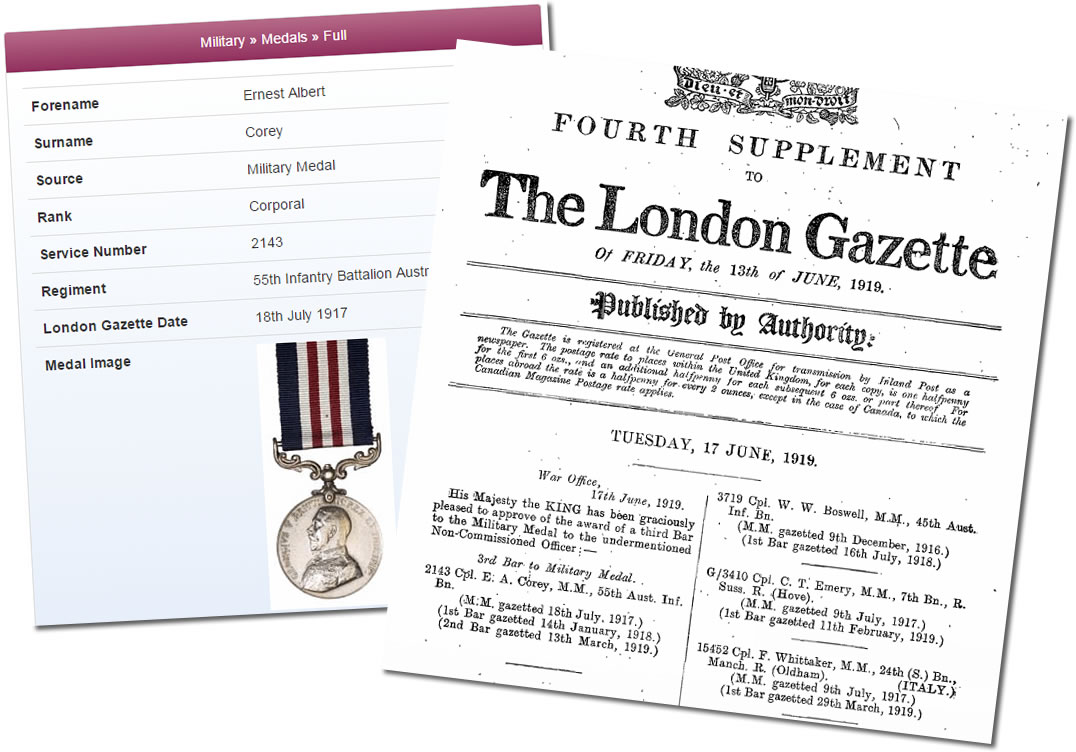 "These medal records of bravery and gallantry in the mud of war are now exclusively on TheGenealogst.co.uk"

Details now available on TheGenealogist range from the most highly-decorated Military Medal recipient, stretcher bearer Private Ernest Corey of the 55th Australian Infantry; to Lady Dorothie May Evelyn Fielding-Moore, the daughter of the Earl of Denbigh and first female recipient of the medal; to Mairi Lambert Gooden-Chisholm who rescued a German pilot from no-man's land. Both men and women, crossing the social divide and class customs of pre-1914 to demonstrated outstanding bravery.

It's easy to find the records of Private Ernest Corey now exclusively available on TheGenealogist. With just a few mouse clicks we discover the heroic deeds of the Blacksmith from Numeralla, New South Wales, the only person to win the Military Medal four times.

A further click takes us to the transcribed detail of his award, with a link available to the citation in the London Gazette, which recorded when troops received medals. Now promoted to corporal, Ernest Corey was gazetted again for his award in 1919.

To find out more about the heroic recipients of the Military Medal, go to www.thegenealogist.co.uk/military-medal. There you will find photographs, and stories of acts of gallantry. TheGenealogist.co.uk gives names and details of the men and women who were rewarded for their heroism in the battle, including rank, regiment and date of medal citation.

The website's unique SmartSearch feature links to the comprehensive range of other military records published on TheGenealogist.co.uk and government publications, enabling you to read the citation for your ancestor's medal.