Educate yourself on the records!

It is always tempting to stick with the good old search engines with which you are familiar yet there are many often less well known ones that can often ‘come up with the goods’. In recent weeks this has proved the case for me with TheGenealogist’s Education search engine which accesses the records of many public, private schools and universities in England and Scotland up to the early 20th century. As with other search features at TheGenealogist, this one is extremely easy to use and affords immediate access to relevant digitised primary source material. Of the schools with records available on the site, a number have been useful to my recent researches – for example Rugby School in Warwickshire, Uppingham School in Rutland, Wellington College in Berkshire, Kingswood in Somerset and Bootham in Yorkshire.

This school is famed far and wide for giving its name to a sport. Although the tale of pupil William Webb Ellis creating the running game is now treated with suspicion by serious historians, there can be no doubt that the ‘Rugby Rules’ were essential to the formation and growth of the game we know today. One of the school’s most successful sons was England rugby player and captain Ronnie Poulton – also known as Ronnie Poulton Palmer. He lost his life in the First World War and his magnificent biography by James Corsan, For Poulton and England, is a must for anyone interested in the history of sport. Ronnie’s school records (and those of his brother) were easily found by entering his name in TheGenealogist’s Education search engine and ‘Rugby ‘as the keyword. 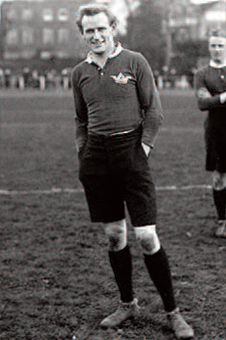 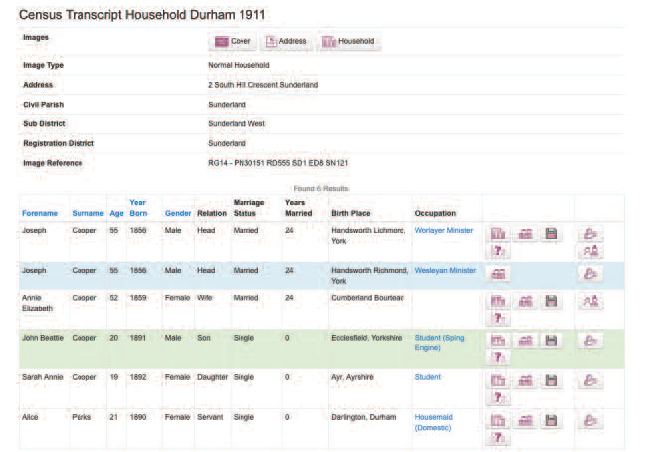 John Beattie Cooper with his Methodist father, in the 1911 census at TheGenealogist 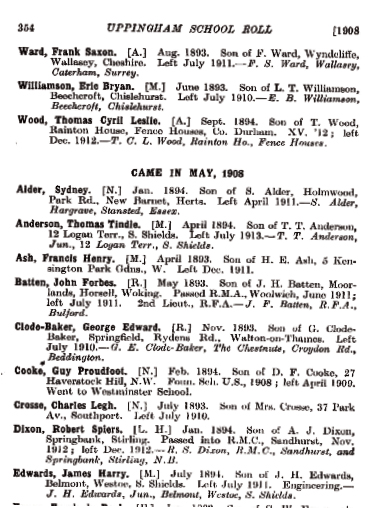 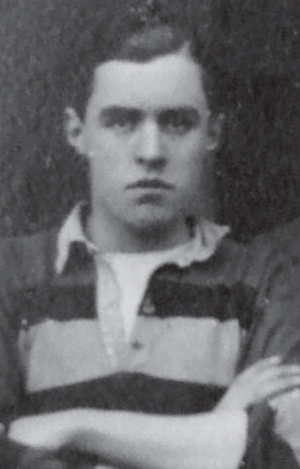 Coming nearer to my own home but still on the sporting front, the education details of one James Harry Edwards at Uppingham School were of interest. James was a young rugby forward for Sunderland RFC just before the same war. He died on the Western Front under tragic circumstances – shot by a sniper. His officers’ record at Kew suggests that he should not have been there in the first place as he had been buried alive in a trench for more than a day in an earlier event. He had clearly suffered both physically and mentally yet had eventually been signed off by an army doctor. Although from South Shields, he moved to Sunderland after school to work in marine engineering.

A recent visit from a cousin who attended this school in the 1950s and 60s set me to thinking. He is the son of a Methodist minister and told me, in his youth, that he went there as it was the alma mater of many of his Methodist ancestors. A quick look at the family name, Shrewsbury and Somerset, soon provided a host of fascinating ancestors.

Kingswood School had already popped up in my own researches and it was helpful to know of the Methodist connection as ministers of the faith and their families tended to move on a regular basis – (according to my cousin every three years in the old days). Frank Blair-Allen and John Beattie Cooper both played amateur sport in Sunderland in Edwardian times for around three years only to disappear although they were mentioned in the club’s wartime records – both were the sons of Methodist ministers and attended Kingswood.

Going further back in time, the records of Wellington College provide valuable information on the formation of Sunderland Rugby Football Club in 1873. They have information on the brothers James and Arthur Laing, founding members of the club who, despite being at school many miles away from home for most of the year, managed to get the club going during their Christmas holidays.

Even more valuable is a reference to the school’s captains of football (i.e. rugby football) which shows James as captain in 1875 – two years after the formation of Sunderland RFC – and an AJ English as captain in 1870. Still involved with the college in 1872, English was at the inaugural meeting of the Rugby Football Union in 1872 with Wellington College as one of the founding clubs! The fact that I can now link my own club directly with the very start of rugby organisation is a great fillip. 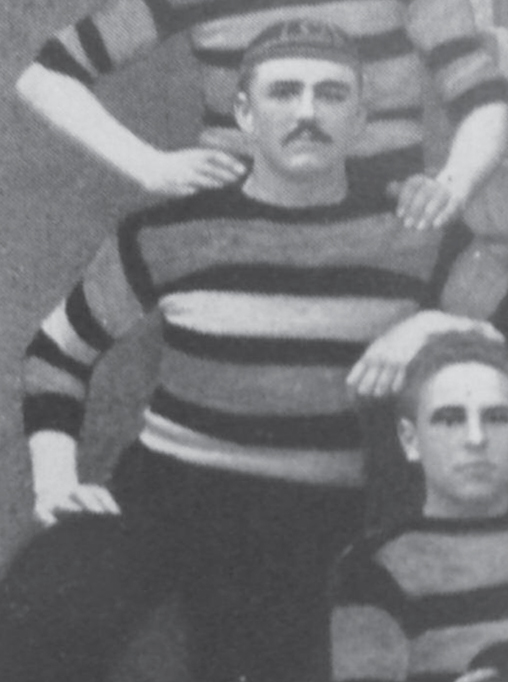 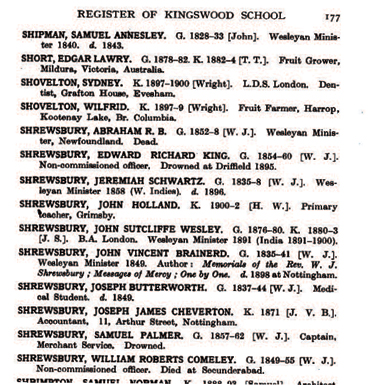 Members of the Shrewsbury family at the Methodist Kingswood School, Bath 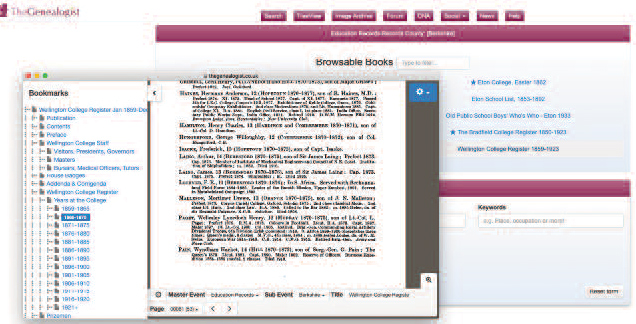 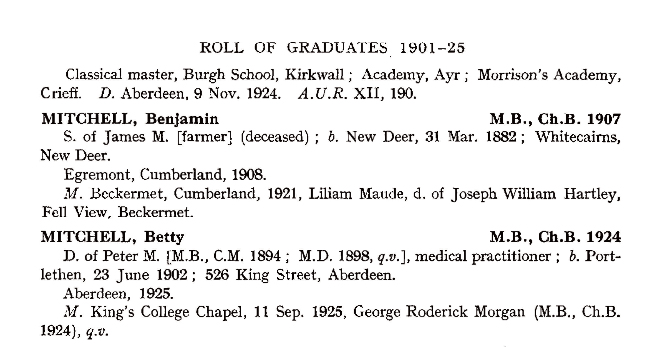 Finding George Morgan’s details also led to this useful biographical for his wife Betty, when she was at Aberdeen University 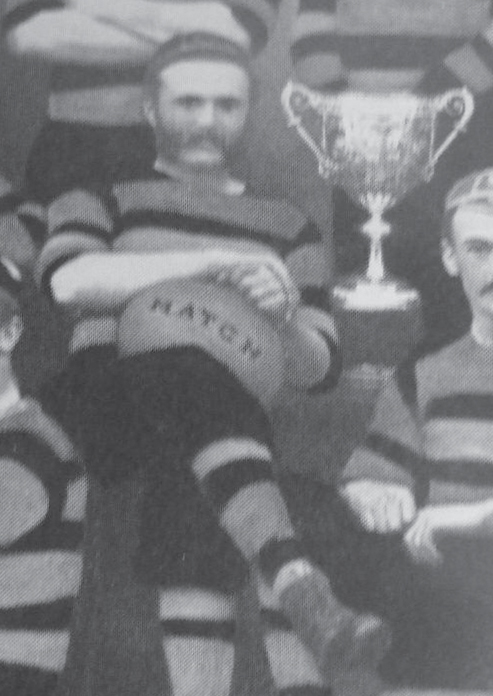 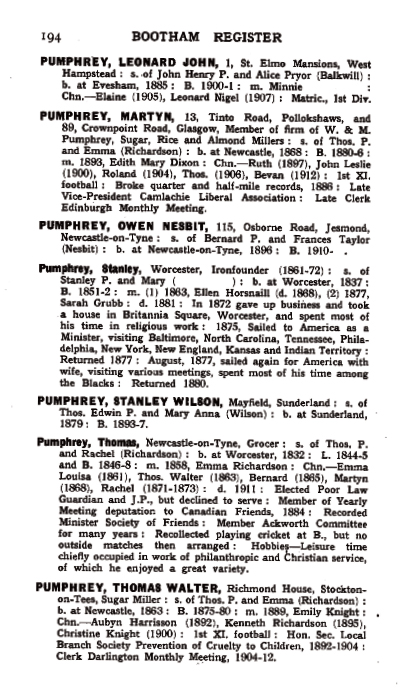 While working on this article I discovered that TheGenealogist Education search engine works as well with home details of the subject placed in the keyword section as with the school or county in which the school stands. While researching a Sunderland man called Hugh Wilson (born c.1877) I had already discovered that he went to Bow Preparatory School in Durham. As often as not, this led to a move on to Durham School so I placed Durham into the key word alongside Hugh’s name. No luck. I then tried ‘Hugh Wilson’ as a name and ‘Sunderland’ as the keyword and was immediately greeted with his record at Uppingham School – a school already mentioned in the main text.

Bootham is a school used by Quaker families as was the case with a number of families local to me named Common and Pumphrey. An examination of their school records proves the old adage that Quaker philosophies encourage engagement and often success in business and trade.

TheGenealogist’s Education search engine also covers the records of a number of universities from Aberdeen in the far north to London. In the case of my own researches, the Aberdeen records proved particularly fruitful as they contained information of two brothers – George and Lewis Morgan who were brought up in a house directly behind my own in the early part of the last century. Both worked in the medical field, served in the Forces and were awarded Military Crosses. The simple entry of George’s full name (George Roderick Morgan) into the Education search engine led not only to his own details but also to those of his wife. It appears that she completed a medical degree after the war.

In George’s case, he qualified at the same time as his wife to be but by then was in his late 20s (he had just begun his course when war broke out). His record also refers to an award of the Military Cross.

His younger brother Lewis was eventually tracked down to the same records by inserting his name and the keyword Sunderland then going to the relevant Aberdeen University record. This shows that he qualified in the year after his brother and sister in law. It also refers to his Military Cross and the medical work he was carrying out in County Durham towards the close of the 1920s.

Finally – and to bring things round full circle – the records of Balliol College, Oxford also contain information on England rugby captain Ronnie Poulton Palmer. It was at Oxford that he really made a name for himself on the rugby field although he also played for Harlequins when he could. Just prior to the war he moved to Liverpool where he met up with a number of his fellow university players. Together they made Liverpool one of the strongest club sides in the country. The search engine also brought up details of his brother Edward who attended the same college.