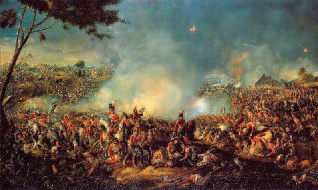 The Battle of Waterloo

TheGenealogist.co.uk has added several new early military records. The Waterloo Roll Call of 1815 enables researchers to find ancestors within a list of nearly 4000 men, most of whom were officers present at the Battle of Waterloo in Belgium on June 18th 1815 under the Duke of Wellington – whose record we can find in this collection. You can search for your ancestors in The Waterloo Roll Call using title, forename, surname, regiment, rank, decoration and staff position.

Many of our forefathers would have served in the British Army, and with the military known for their record keeping these can provide researchers with valuable information on ancestors. The earliest records in this new release are 16th century Militia Musters for Somerset. The Certificate of Musters in the County of Somerset 1569 contain names of Militiamen (soldiers raised from the civil population) and what role they carried out including archer, pikeman and light-horseman.

For Mancunian military forebears, The Manchester Regiment 63rd and 96th 1758-1922 includes the succession of Colonels and an alphabetical roll of regimental officers from 1758 to 1923 showing dates of service with the regiment, dates of promotion and date and reason for being struck off. With the centenary of the First World War these records can be used to find casualties of all ranks from ‘The Manchesters’ in the Great War. With a list of honours and awards, including foreign, these digitised books also provide an interesting indepth history of the regiment so that researchers can follow the postings of the Manchester Regiment and the action in which it took part.

Those researching Victorian soldiers will also welcome the inclusion of several early Army Lists in this release for January 1838, December 1838, April 1886 and The Annual Army and Militia List 1855.

Launch of 230m US records dataset

TheGenealogist.co.uk is soon to launch more than 230 million US records as part of its Diamond subscription package. If an elusive ancestor went to the United States, the site’s expanded international records collection can help.

The release will include:

The US Social Security Death Index is a database of over 90 million death records, giving information on those who died from 1936 whose death was reported to the Social Security Administration. The data includes: given name and surname; date of birth; month and year of death (or full date of death for accounts active in 2000 or later); social security number; state or territory where the social security number was issued; last place of residence.

The 1940 American census is searchable by first name, surname, age, state, county, street address and place of birth (allowing users to find Brits enumerated in the American census). Records have a transcription along with the actual image of the schedule and, where available, are linked to the enumeration index map for the area so that you can see exactly where your ancestor lived.

The New York Port Arrival – Irish Famine Records 1846-1851 give the family historian access to useful information about immigrants mainly from Ireland to the United States during the era of the Irish Potato Famine.