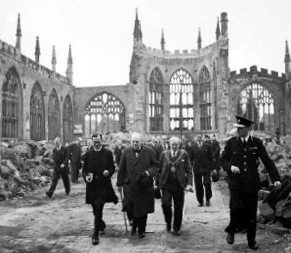 It is likely that the first settlement at Coventry grew around a Saxon nunnery. Leofric, Earl of Mercia, and his wife Lady Godiva built a Benedictine monastery on the site in 1043, and in the mid-13th century this had been completed as a cathedral.

In time, merchants settled around the monastery and castle (mostly destroyed in the 12th century). Running through the town was the River Sherbourne which provided a source of water and power for mills, and there were plentiful supplies of timber nearby for fuel and building purposes. Its central location and proximity to the old Roman Watling Street and the Fosse Way made it ideally situated for trade.

Trade privileges encouraged the exchange of local produce such as wool, soap, needles, metal and leather goods. The abundant grazing land around the town, suited to sheep farming and wool production, enabled it to become a centre of many textile trades by the 13th century, especially those related to wool.

Coventry also had a small but thriving trade in glass-making and painting as well as tile manufacture, and by the 14th century and throughout the medieval period, Coventry was the fourth largest city in England, with a population of around 10,000. On several occasions Coventry was briefly the capital of England.

In 1451 King Henry VI granted Coventry a charter making Coventry a county in itself; a status it retained until 1842 when it reverted to being a part of Warwickshire.

In the 16th century, due to the restrictive practices and monopolies of the trade guilds, the cloth trade declined and the city fell on hard times.

When the English Civil War broke out, Coventry became a stronghold of the Parliamentarian forces. On several occasions Coventry was attacked by Royalists, but each time they were unable to breach the city walls.

It is known that a silk weaving company was founded in Coventry in 1627, and at around the start of the 18th century, a ribbon weaving works was established, and these trades became the basis of the city’s revitalised economy.

The Coventry Canal was opened in the late 18th century, and one of the first trunk railway lines, the London and Birmingham Railway, was built through Coventry and opened in 1838.

This first industrial boom came to a sudden end during the 1860s when foreign imports killed off the industry, and Coventry went into a slump. However, before long other industries began to develop and Coventry regained prosperity. Industries which developed included watch and clock making, manufacture of sewing machines, and from the 1880s onwards bicycle manufacture.

The first British motor car was made in Coventry in 1897 by The Daimler Motor Company Limited, and a growing number of other small motor manufacturers began to appear. The manufacture of aircraft, aero engines and related equipment also took place in Coventry as early as 1916, and began to dominate.

As late as the 1920s, Coventry was being described as ‘the best preserved medieval city in England’. But Coventry’s darkest hour came when Hitler singled out Coventry for heavy bombing raids in WW2. Large areas of the city were destroyed in massive raids in 1940 and 1941.

After the war, the city was extensively rebuilt, although a number of fine medieval and neo-Gothic buildings remain.

Exclusive census analysis from data at TheGenealogist reveals that common surnames in Coventry in the 19th century included Clarke, Ward, Green, Harris, Hill, Cooper, Jackson, Wilson, Moore and Thompson. In 1841, other common names here included Parker, Lee, Turner and Hewitt; plus Allen and Robinson in 1911. In that timespan the city’s population rose from 31,000 to 107,000.

Leading data website TheGenealogist.co.uk has a wealth of records for Coventry and its traditional county of Warwickshire. Here is a quick run-down of what you can find (in addition to national collections):