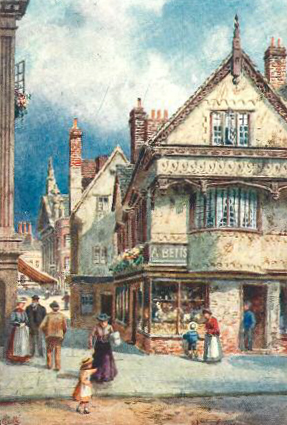 The name ‘Banbury’ derives from Banna, a Saxon chieftain said to have built a stockade there in the 6th century, and ‘burgh’ meaning settlement. The name appears as Banesberie in the Domesday Book of 1086.

Banbury stands at the junction of two ancient roads: Salt Way, its primary use being the local transportation of salt; and Banbury Lane, which began near Northampton and continued onwards to the Fosse Way at Stow-on-the-Wold.

Banbury Castle was built in 1135 by Alexander, Bishop of Lincoln, and survived into the English Civil War, when it was destroyed. Medieval Banbury was badly hit by the Black Death of 1348–49 as it probably killed half the population of the town, but it quickly grew and had a population of about 1,600 for the next 300 years.

For centuries, trade in wool, ale, cakes and cheese created wealth for the town. Wool was first referred to in 1268, and cheese was manufactured from the 15th to the 18th centuries.

Banbury was partially destroyed by a fire in 1628. It played an important part in the English Civil War as an operational base for Oliver Cromwell, who is reputed to have planned the Battle of Edge Hill in the back room of an inn. The town was pro-Parliamentarian, but the castle was manned by a Royalist garrison.

The Civil War helped develop Banbury’s industry. Kings Sutton was a local centre for saltpetre digging, and the Royalist garrison was at work early in 1645 quarrying it there and making it into gunpowder in a specially built house near Banbury. Despite this industry, the Civil War and the short two sieges noticeably damaged the town’s prosperity.

Quaker missionaries had been active in the Banbury area in the Commonwealth period of the 1650s, and several Quaker communities in and around Banbury were recorded in the Visitation Returns of Thomas Secker, Bishop of Oxford in 1738.

The opening of the Oxford Canal from Hawkesbury Junction to Banbury on 30 March 1778 gave the town a cheap and reliable supply of Warwickshire coal. In 1787 the canal was extended southwards, finally opening to Oxford on 1 January 1790.

The famous rhyme ‘Ride a cock horse to Banbury Cross’ dates back to at least the 18th century; the town had various crosses until they were destroyed by Puritans in 1600. The current cross dates from 1859.

The first two railways to reach Banbury opened in 1850. Firstly the Buckinghamshire Railway opened the Banbury to Verney Junction Branch Line from Bletchley on the London and North Western Railway; within months the Oxford and Rugby Railway from Oxford opened a station.

The term ‘Banburyshire’ to cover the area around the town was first used in the 19th century and has no official or ancient basis.

The National Filling Factory in Banbury was built in World War I. Production of filled shells began in April 1916 and ended in 1924. At the height of the war it gave employment to 933 men and 548 women.

Exclusive census analysis from data at TheGenealogist reveals that common surnames in Banbury in the 19th century included Baker, Gardner, French, Grant and Wyatt; plus Herbert, Jackson, Claridge, Powell, Page, Clarke, Gillett and Potter in 1841 and Harris, Mold, Watts, Haynes, Adkins, Waters, Gilkes, Cox, Butler and Turner in 1911. The population rose from 6,700 in 1841 to 29,000 in 1911, with agricultural roles dominating occupations.

Leading data website TheGenealogist.co.uk has a wealth of records for Banbury and its county of Oxfordshire. Here is a quick run-down of what you can find (in addition to national collections):