A Rich Resource for the Regiments

‘This is a story of plain men, who fought because they hated war, who voluntarily sacrificed themselves for their country and their friends and in doing of it, lost not their humour, their standard of duty, nor their faith.’

First World War regimental histories can be used to reveal some fascinating details for family historians tracing ancestors who went to war. These publications, some 70 of which have been released for Diamond subscribers of TheGenealogist to use, often give useful details of the battles and campaigns that the regiments were involved in.

These, along with the lists of the officers, and in some cases the men, can help researchers to better understand the course of an ancestor’s war. The regimental histories typically include various details relating to the honours and medals awarded in the conflict. They generally concentrate on a particular regiment, battalion or a division reporting an account of the men’s progress across the battlefield. In most cases there will be maps included for better understanding the geography of the theatre of war that the men were fighting in. Reading the accounts of the campaign will usually identify names of men and officers who had distinguished themselves on the battlefield, and can be very valuable for understanding what your soldier ancestor had lived through.

A case in point are the details that we can read in The Story of the 25th Battalion Gloucestershire Regiment 1914-1918 for an officer who, in the space of a few calendar months in 1917/18, was awarded the Military Cross (MC) and Bar. Using this military record resource provides the researcher with a very good insight into what Captain Dudbridge did to earn these awards for gallantry – one can also read something about his character in a paragraph that paints with words a thumbnail sketch of the young man:

Captain Dudbridge (“Dudders” as he was affectionately called by his brother officers) came out with the Battalion in 1916. He has shown his resource and efficiency throughout the Battalion’s most critical days. He possessed, too, a genial and hearty manner which immediately invited friendship. He was a very fine rugby forward, a qualification which never fails to rouse the admiration of a West Countryman, and he had an amazing capacity for telling yarns and for making a very good story out of an insignificant incident.

... in command of a support Company, and when the enemy attacked under cover of heavy bombardment he organised the defence of the position, rallied men who had been driven back, and by means of bombing attacks forced the enemy back. He handled his Company with the greatest skill, and his promptness and gallantry undoubtedly saved a serious situation.

The account of the war movements that we can now read in The Story of the 25th Battalion Gloucestershire Regiment 1914-1918 puts this short description into the context of the action that his battalion faced at that time. It is in the chapter titled ‘Back to Arras’ where the narrative tells readers that, at the end of November 1917 a move had been made towards the Cambrai front.

The battalion had travelled by train to Royaucourt and then by bus to Fins, arriving at 6pm. The report reveals ‘everyone there was in a state of intense excitement as the enemy had broken through and the Battalion expected every moment to be ordered into action’. At midnight they moved to Gonnelieuin to offer assistance to the 3rd Guards Brigade who had been fighting continuously for eight days. Providing close support until the next night, the Glosters, as they are known, were then ordered to move through Villers-Plouich to a map reference behind Welsh Ridge and wait for further orders.

We read in this detailed report that Captain Dudbridge, commanding D Company, halted his unit in a sunken road and, while he was showing his commanding officer the position, an enemy plane dropped a bomb close to where his men were situated. The resulting explosion killed 16 and wounded 53 of Dudbridge’s company when it hit an ammunition dump above their location.

Just as the catastrophe occurred, the order came through for them to take up a position on Welsh Ridge and so in the pitch-black darkness the battalion moved to the new location. Their relocation was timely as no sooner than they had gone than the sunken road came under bombardment from the Germans which could have had terrible consequences had they remained there.

At dawn the enemy attacked La Vacquerie, driving in the Warwicks and Glosters. Their comrades from the Warwicks had their lines broken by bombing and it was at this time that

Captain Dudbridge, who was on the right, organised, on his own initiative, a counter bombing attack and succeeded in re-establishing the line. This little action proved that D Company, under the inspiring leadership of Capt. Dudbridge, had lost none of its morale, in spite of the disaster in the sunken road which might well have shaken the Company to pieces.

The report goes on to say ‘Capt. Dudbridge and Lieut. Radford were awarded a stouthearted M.C. Apiece, and Pte. W.A. Davis gained the M.M.’ 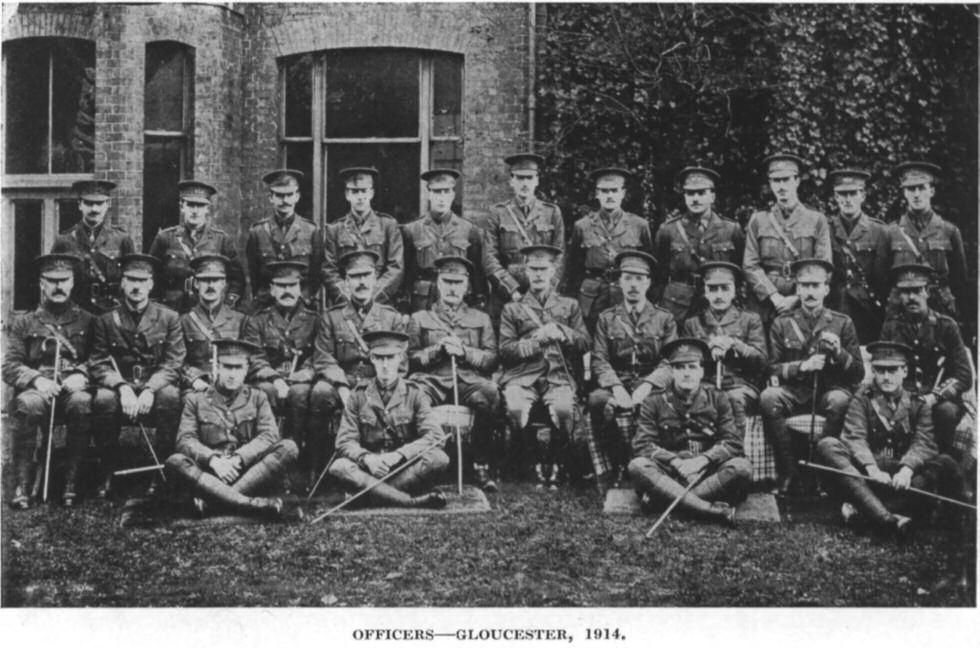 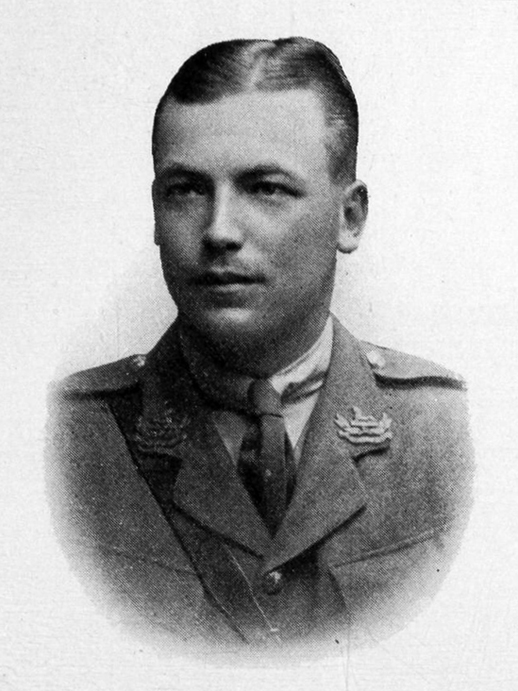 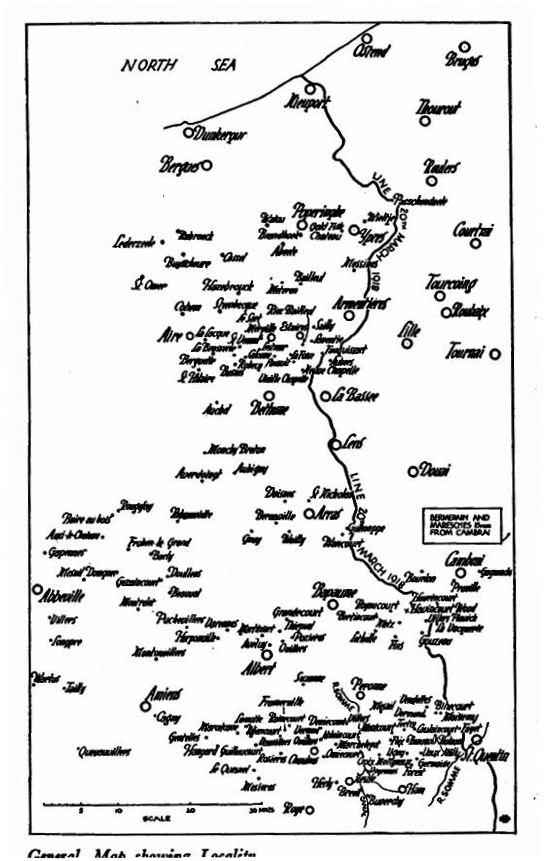 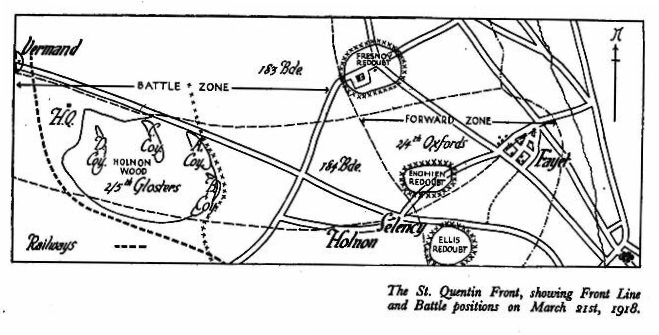 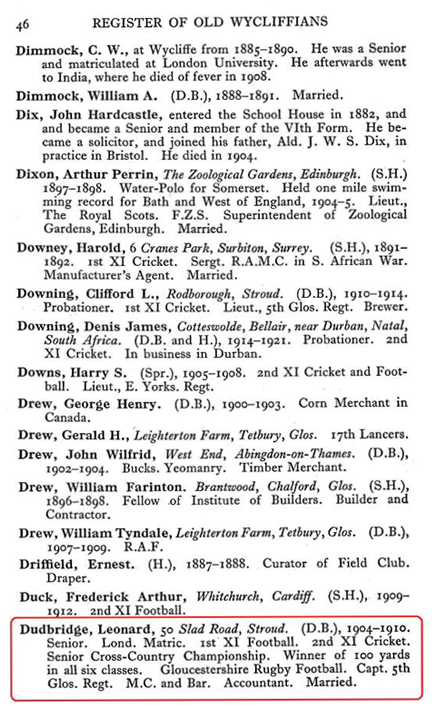 Bar to the MC

In March of the next year (1918) the battalion was fighting near Vermand. From the map of the St Quentin Front, showing frontline and battle positions on 21 March 1918 and published in the regimental history, we can see that Capt. Dudbridge’s D Company was on the left of Holnon Wood.

It was at this time that Captain Dudbridge was awarded the Bar to his MC when his company was outflanked by the enemy. Coming under attack by superior numbers, he maintained his position and when given the order to retire he personally supervised the withdrawal while exposed to machine-gun and rifle fire.

From the regimental history we can work out the background to what happened that day. The publication tells us that it had been misty until about 10am and so it was difficult for the British to gauge the situation with regard to where the enemy were. As the mist lifted they discovered that small parties of Germans with machine-guns had worked their way down the Vermand road to be now at the rear of the Glosters’ support positions. These units were causing casualties at the battalion’s headquarters and among Dudbridge’s D Company. After midday the whole of the battalion was now in trouble as the Germans were seen to be massing on the high ground east of Vermand. The battle zone, shown on the left, had now fallen and so within a few hours the battalion would be surrounded by the enemy.

At 3:30pm the brigade sent a message for the battalion to withdraw to the rear trenches in front of Beauvois. For this to be carried out, however, D Company had to remain and give covering fire so that the other companies could move back. When Dudbridge’s men were finally given the order to move back themselves they did so fighting a difficult rearguard action and at the same time coming under rifle and machine-gun fire. The regimental history notes:

‘Owing, however, to the skill with which Capt. Dudbridge manipulated his troops and to the heroism of all ranks, the Company ultimately joined the Battalion at Beauvois.’

A search of some of the other military records on TheGenealogist notes that Captain Dudbridge was wounded on 13 April 1918, though this event does not get reported in The Story of the 25th Battalion Gloucestershire Regiment 1914-1918.

Further research in the records

Leonard Dudbridge had joined the regiment in May 1915 as one of the early recruits, as we can read when he appears in the publication The Stroud District and its Part in the Great War 1914-1919, which is also available within the Military Records collection on TheGenealogist. From a general search of the records at the site, the 18-year-old can be found in the 1911 census for Stroud working as an ‘incorporated accountant’s clerk’. He is the son of accountant John Stephen Dudbridge and his wife Annie. The Trades, Residential and Telephone books collection on TheGenealogist identifies the Dudbridges in Kelly’s Gloucestershire Directory for 1906. From this we can see that Leonard Dudbridge’s father was listed as a public auditor at 8 Lansdown in Stroud, the same address as SJ Dudbridge & Sons, incorporated the family business.

We have already seen in the regimental history that Leonard Dudbridge was reported to have been ‘a very fine rugby forward’. Searching TheGenealogist’s educational records to see what else can be found discovers the school register for Wycliffe College. This details the young Dudbridge’s sporting achievements, which include his membership of the first eleven rugby team as well as participating in cricket and cross-country running. Delving further into this record collection turns up a picture of Leonard Dudbridge photographed as a schoolboy, when a member of the Wycliffe College 1st IX 1908–1909.

Fleshing out an ancestor’s story requires the family history researcher to look for sources that they may not have considered. When an ancestor is mentioned in such a mine of information as the regimental histories this process is made much easier. Even if they are not referred to by name, however, to read where an ancestor’s regiment fought and what battles they had to deal with can add some understanding to what they had to endure and so can be a useful addition to a family story. 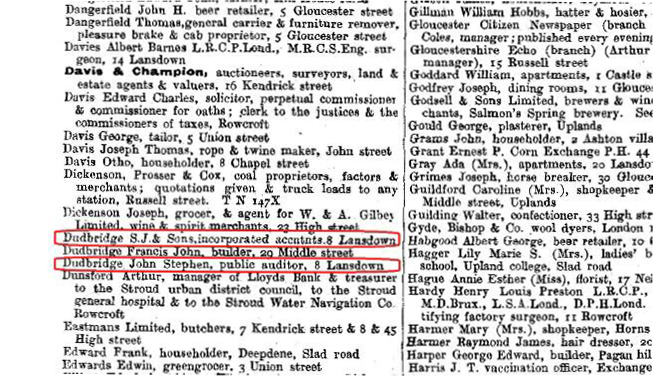 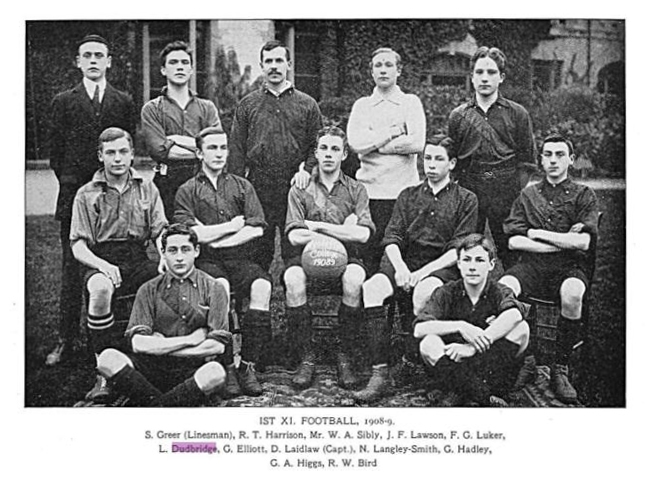 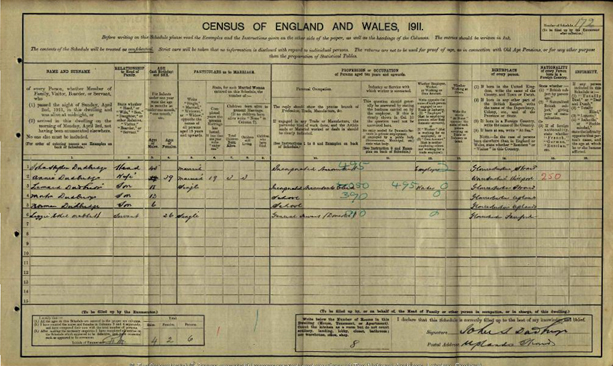