Make the most of Parish Registers

Church of England parish records are the single most important source of information about families in England and Wales in the 17th and 18th centuries. They continue to this day, of course, although since civil registration began in 1837 they have been superseded somewhat.

They began way back in 1538, with registers completed weekly, although often only on loose sheets of paper. Only around 800 registers still survive from those first years, but in 1598 a ruling from Queen Elizabeth came into force which meant the registers would henceforward be kept in parchment books (this is also the date when copies called Bishop's Transcripts began). The plan was also for the older registers to be copied into these books, but in practice many were only copied back to 1558. (There were also early instances of transcription errors appearing.)

Many parish registers were halted (or kept in secret) during the English Civil War, known to family historians as the 'Commonwealth gap': from 1647-1660 the established church was briefly

Presbyterianism. In 1653, Cromwell confusingly appointed clerks called 'parish registers' to keep civil records of birth, marriage and death, but this didn't last and some Church of England clergy later destroyed them anyway.

Until the early 19th century there were 11,000 parishes – there are now around 16,000, mainly reflecting urban growth from Victorian times onward.

A drawback is that registers can often be very brief. Vicars could be slapdash in keeping details, so you may only get the name of a person (often abbreviated) and the date, and not even the parents for a birth record – but then again, sometimes the vicar would go the extra mile and make personal remarks about the individuals!

Even until a few years ago, tracking down parish registers involved a visit to a local record office, but family-run data website www.TheGenealogist.co.uk in particular has transformed parish register research for family historians. The site is digitising more and more records from thousands of parishes. These have two main formats, either as a database (Transcripts) and searchable book images (Printed Books).

Both kinds are searchable from the site's Master Search, which will also help link records to other sources such as civil registration or censuses or, further back in time, resources such as the site's major new tithe records collection. In some cases the database records also have linked images of the original registers.

To give an example of the progress that's being made in digitising this data distributed all over the country, in February 2014 alone the site added well over a million parish records for Essex, more than 100,000 each for Wiltshire, Somerset and Kent, and tens of thousands for Worcestershire.

There are millions of parish register transcriptions easily accessible at www.TheGenealogist.co.uk. 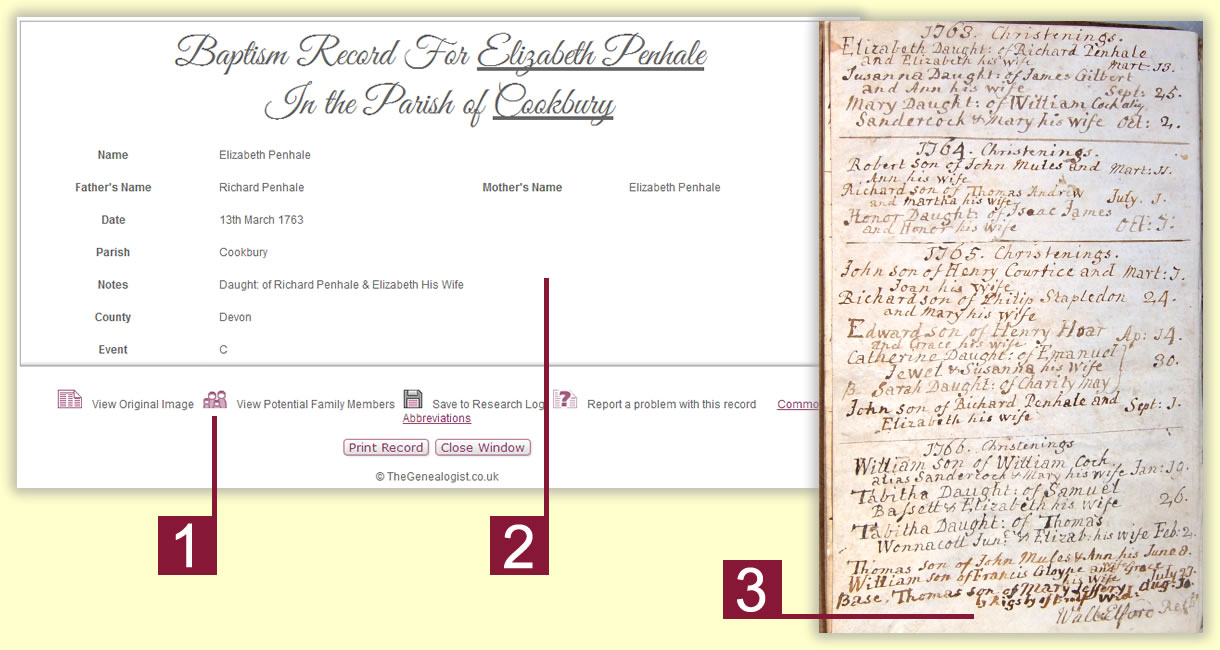 1. This icon will bring up a list of other potential family members – very useful for connecting multiple generations.
2. Every parish record at TheGenealogist is searchable via the Master Search. Here's a typical baptism transcription. Remember that the date is of the baptism rather than the birth itself – which in some cases could have been weeks or even months earlier.
3. This register dates from the 1760s – printed forms were only introduced for baptisms and burials from 1812. 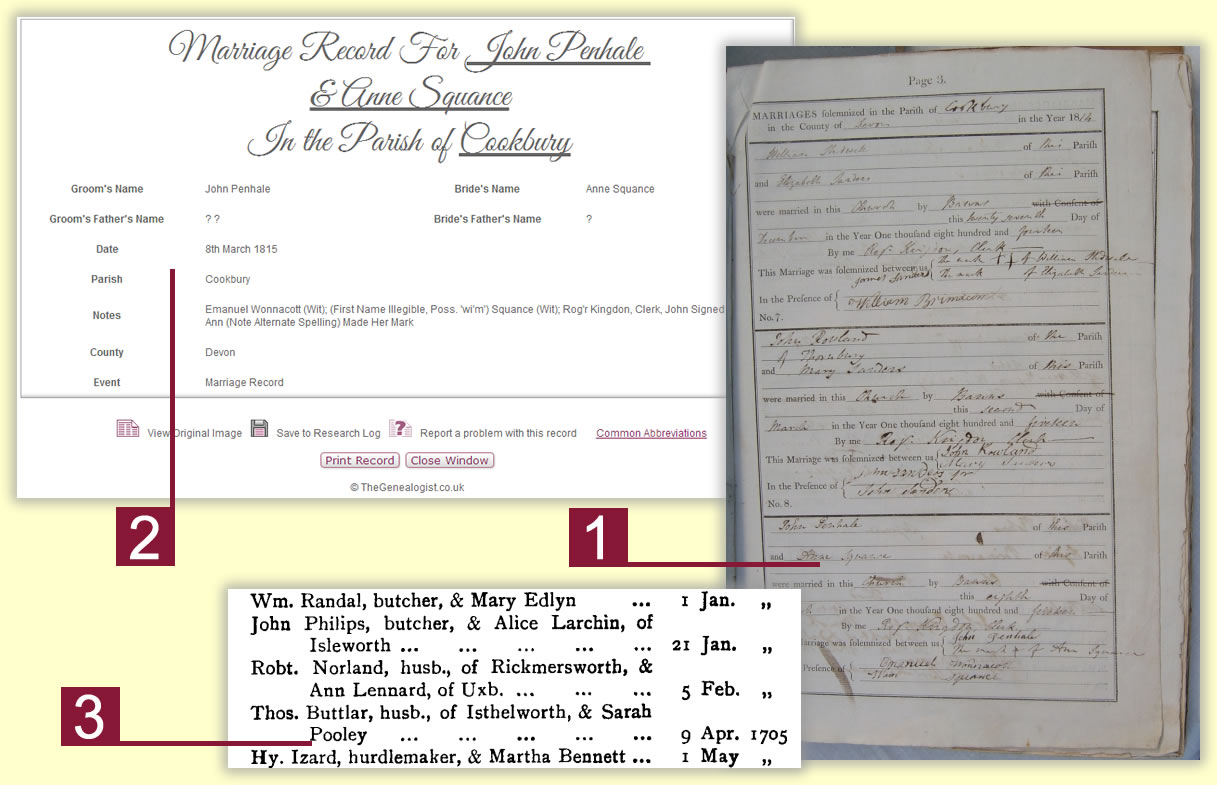 1. Pre-printed registers for marriages were introduced in 1754.
2. TheGenealogist's marriage transcriptions include details of witnesses and officials where available – the former might have been family members.
3. The information available in parish registers varies a good deal, but marriages typically reveal the most – here one can glean women's maiden names, men's occupations and whether the couple were of 'this parish' (usually the case if nothing else is stated) or elsewhere. 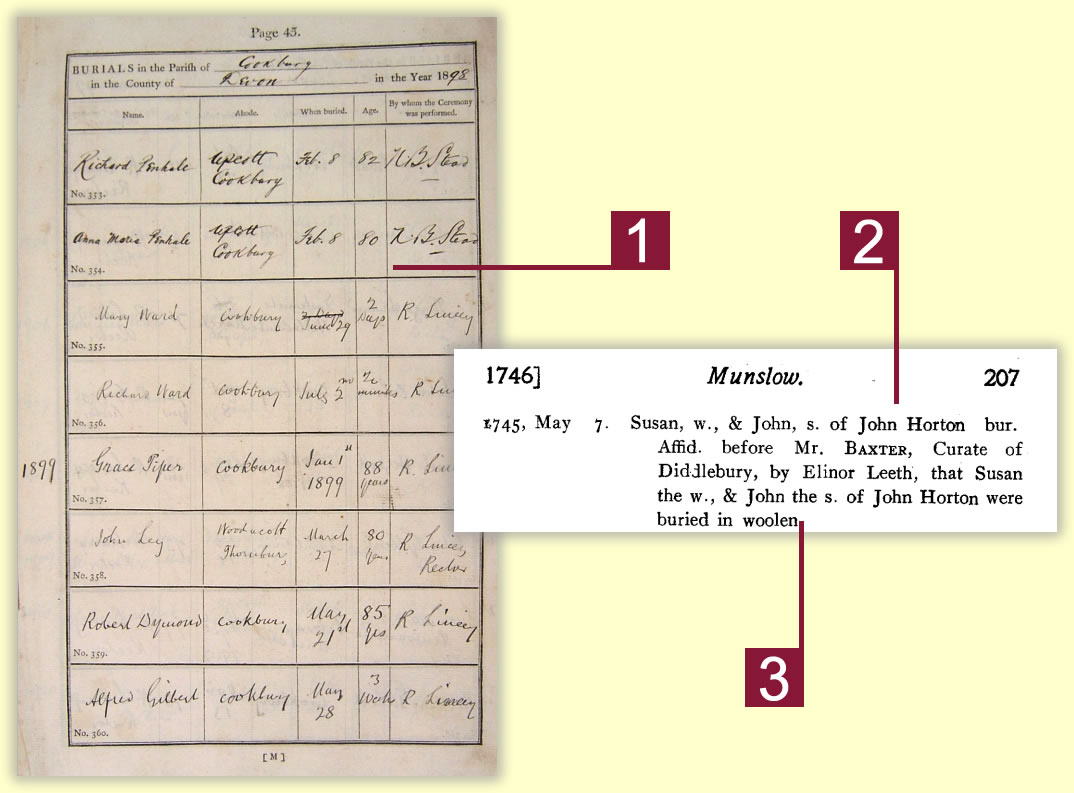 1. In some case TheGenealogist's transcripts link to scans of the original registers such as those shown here. Burial registers were only obliged to indicate the age at death and the person's residence after 1812. Remember that dates refer to the burial rather than the exact date of death.
2. Parish Records at TheGenealogist are either in database form, transcribed from the original registers, or from printed books as shown here – many historical societies have compiled these since Victorian times, and continue to do so today.
3. Some registers indicate burial in wool owing to the Burial in Woollen Acts of 1666-80. These excluded the use of foreign textiles to support the British wool trade. There was a £5 fine for not complying (sometimes paid by the wealthy who favoured silk) and the burial in wool had to be sworn by affidavit. It is a broad indicator of an ancestor's wealth – those too poor to pay were sometimes marked as buried 'naked'. The practice begin to die out from 1770 and the Acts were repealed by 1814.